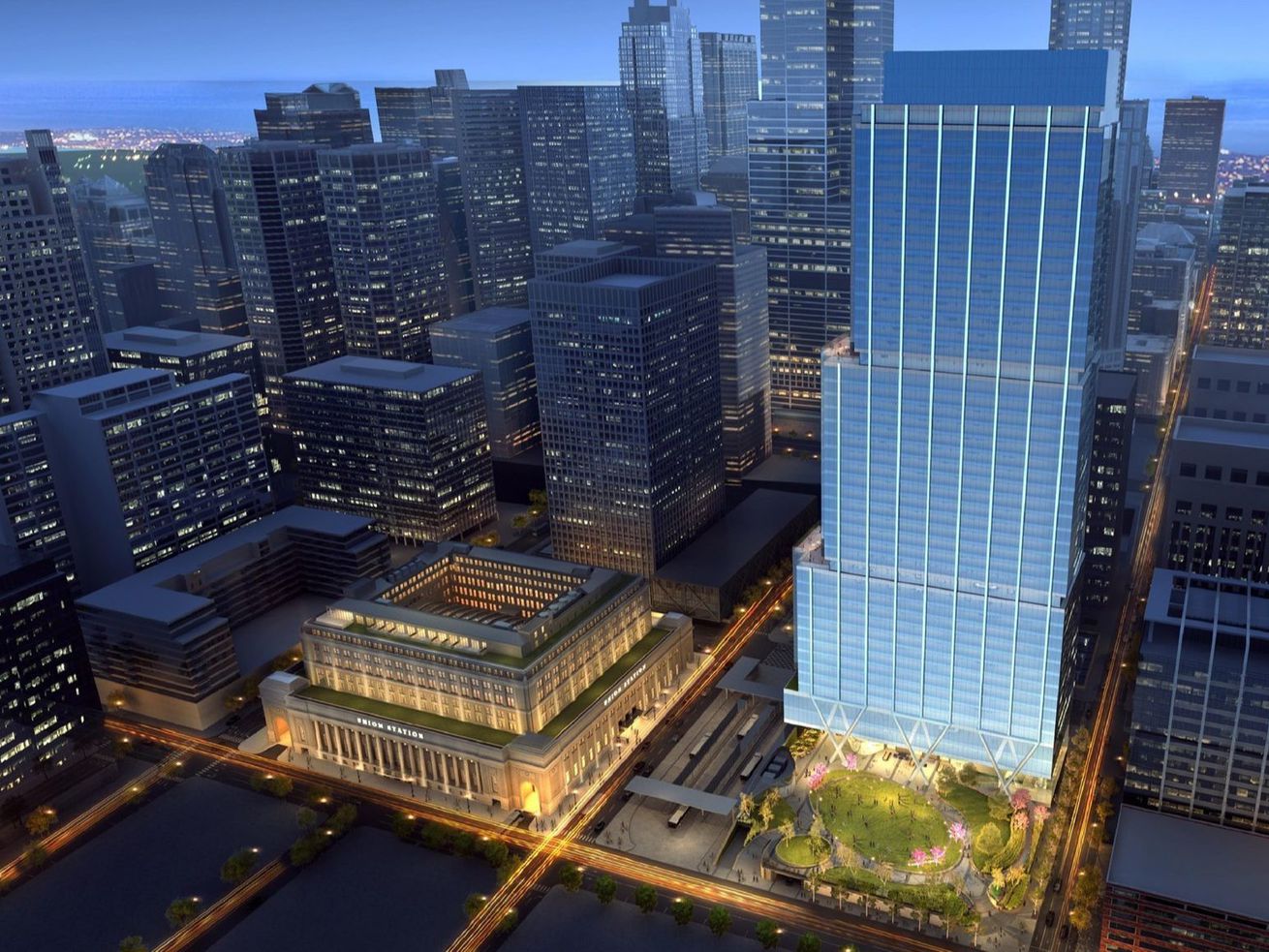 The team behind the $1 billion redevelopment of Chicago’s Union Station took the wraps off a heavily revised plan at public meeting on Tuesday night. It ditches a controversial seven-story apartment addition slated for the roof the landmarked Beaux Arts building while adding a new 50-story office tower next door.

“I think it goes without saying that neighbors and generally a lot of people in the city of Chicago were not excited about the last proposal that was put fourth,” said 42nd Ward Alderman Brendan Reilly during his opening remarks at a public presentation on Tuesday night. “The development team took the comments to heart and put a lot of work into trying to address those [concerns].”

The reworked plan now calls for a single-story addition to the station’s historic 1925 headhouse building—the upper levels of which will house two hotels with a total of 400 guest rooms and office space for Amtrak. Set back from the edge of the rooftop cornice, the new penthouse level will attempt to mesh with the existing building’s architectural style and will not be visible from street level.

After scrapping the blocky apartment overbuild and its 404 rental units, the latest proposal will create a hotel entrance on Jackson Street, add retail offerings to Clinton Street, and relocate valet operations to an internal space within the building. The traffic management plan was tweaked reduce drop-offs on Adams.

“These are wonderful improvements,” said Ward Miller, executive director of Preservation Chicago. “The seven-story addition was not going to fit whatsoever. This is really a step forward. Thank you,” he added, drawing a resounding round of applause from the room.

Miller also called on the city to reopen Union Station’s landmark designation to extend protections to more interior spaces including the Burlington Room and historic barbershop as well as strike any zoning provisions allowing for a large vertical expansion in the future.

The meeting also provided the public with its first glimpse at the second phase of Union Station’s master redevelopment plan: a new 50-story, 715-foot-tall office tower slated to replace the Amtrak-owned parking structure south of the station’s transit center.

Designed by Chicago’s Goettsch Partners, the glassy high-rise would contain 1.5 million square feet of space and 400 parking spaces. It features a stepped design with three setbacks and meets the ground with angled columns—similar to the 800-foot Bank of America-anchored tower under construction at 110 N. Wacker Drive (another Riverside and Goettsch collaboration).

Phase two will include a publicly accessible 1.5-acre park and plaza just west of the tower. Designed by Wolff Landscape Architects, the open space faces some challenges including its proximity to noise and exhaust of idling buses of the adjacent transit center and an elevation shift that would result in a mostly blank wall along Clinton Street.

While the design of the second phase is still subject to change, it is considerably more refined and accessible than previous conceptual renderings. Released in 2017 when Amtrak first announced Riverside and Convexity as master redevelopers, those images showed a pair of boxy towers rising atop an elevated plaza that awkwardly cantilevered over the neighboring bus depot.

One aspect of the new tower that was not brought up at Tuesday’s meeting was prospective tenants. It is, however, understood that BMO Harris Bank is engaged in negotiations to move its Chicago offices to the new transit-oriented high-rise, according to a report by the Chicago Tribune.

The Toronto-based company is considering a 500,000-square-foot lease in the building—a commitment large enough to jump-start construction. Such of a move would likely see the bank consolidate employees from its existing 800,000 square feet of existing Chicago offices at 115 S. LaSalle Street, 111 W. Monroe Street, and 200 W. Adams Street.

The adaptive reuse of Union Station’s headhouse and the second phase high-rise will both require city approval. A proposed amendment to the site’s existing Planned Development zoning will need to pass the Chicago Plan Commission and Chicago City Council before moving forward.

If approved, the new tower would rise just steps from another massive office project—the redevelopment of Chicago’s old Post Office. The sprawling, 2.8 million-square-foot building straddling the Eisenhower Expressway recently secured a lease with Walgreens that would see the healthcare giant move 1,800 employees to the long-vacant Art Deco structure.

Update: Tuesday’s presentation can be viewed in its 53-slide entirety on Alderman Reilly’s website.