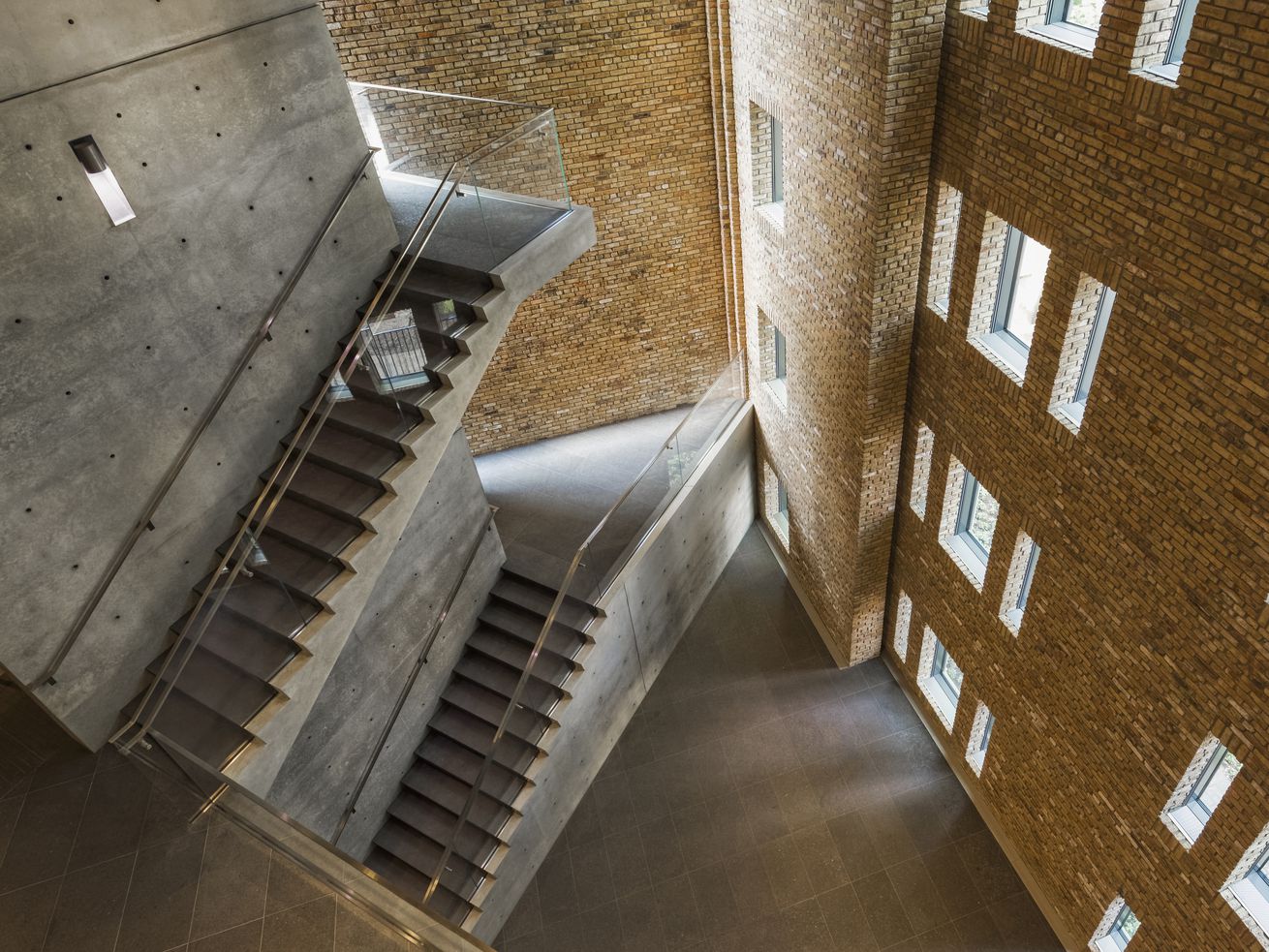 Wrightwood 659 is a new venue which officially opened over the weekend in Lincoln Park with an exhibition examining French architect Le Corbusier’s important influence on Japanese architect Tadao Ando.

The art space is designed by Ando and sits on a quiet residential block in a former 1920’s apartment building. Once inside, the Pritzker Prize-winning architect’s signature style is instantly recognizable: masterful concrete work and thoughtful consideration of light.

The inaugural exhibition Ando and Le Corbusier: Masters of Architecture provides an opportunity for visitors to witness the works of two influential masters. The exhibition will run through Saturday, December 15.

Ando didn’t receive any formal training in architecture, and was entirely self-taught. He visited buildings and traced sketches from architects he admired to learn the complicated craft. He was deeply inspired by architects like Le Corbusier, Ludwig Mies van der Rohe, and Louis Kahn.

The second floor of Wrightwood is devoted to Le Corbusier’s work spanning his career: paintings from the 1920’s, furniture, models, and postwar exposed-concrete architectural work. Also featured are sketches of Le Corbusier’s work from Ando’s students. Visitors will see highlights such as original models of Villa Savoye, a modern private house near Paris, and the Unité d’Habitation, a housing project in Marseille.

The third floor shows Ando’s work including projects on the island of Naoshima and its Benesse Art Site with models of the museum and hotel buildings. On the fourth floor is models of Ando’s three major American museums: the Pulitzer Arts Foundation in St. Louis; the Modern Art Museum of Fort Worth; and the Clark Art Institute in Williamstown, Massachusetts. The models were created by Chicago architecture students at IIT, University of Illinois Chicago and the School of the Art Institute, respectively.

The three models are accompanied by hand-drawn sketches by Ando, showing the process he employs when designing museum spaces. Alongside photographs of his work in the exhibition, Ando sketched and signed in blue marker directly on the walls of the gallery.

With a blue marker, Tadao Ando signed (and drew on) the walls of an exhibition of his work at Chicago’s new 659 Wrightwood exhibition space. pic.twitter.com/yRbDKCtrYT

One of the highlights includes a concrete, scale-model of Ando’s iconic Church of Light in Ibaraki, Osaka, Japan which is located on the mezzanine level underneath the skylight.

In a city filled with many internationally regarded art institutions, Wrightwood aims for more “intimate experiences of art and architecture,” the venue said in a statement. Wrightwood won’t own a collection, but it plans to host exhibitions that focus on socially engaged art and explorations in architecture and design. Visitors will only be able to see the venue and shows by making a reservation online, walk-ins aren’t accepted.

The exhibition space was founded by Fred Eychaner and Dan Whittaker. Eychaner is an LGBTQ activist and philanthropist, and Whittaker served as co-creator of the inaugural exhibition and represented the venue during construction.

Both Eychaner and Whittaker are focused on making Wrightwood a space to showcase activist art. Upcoming exhibits include: Dimensions of Citizenship, part of the U.S. exhibition at the 2018 Venice Architecture Biennale; an exhibition aligning with the fiftieth anniversary of the Stonewall rebellion; and a presentation of work by Japanese painter Tetsuya Ishida in collaboration with the Museo Reina Sofia in Madrid, Spain.