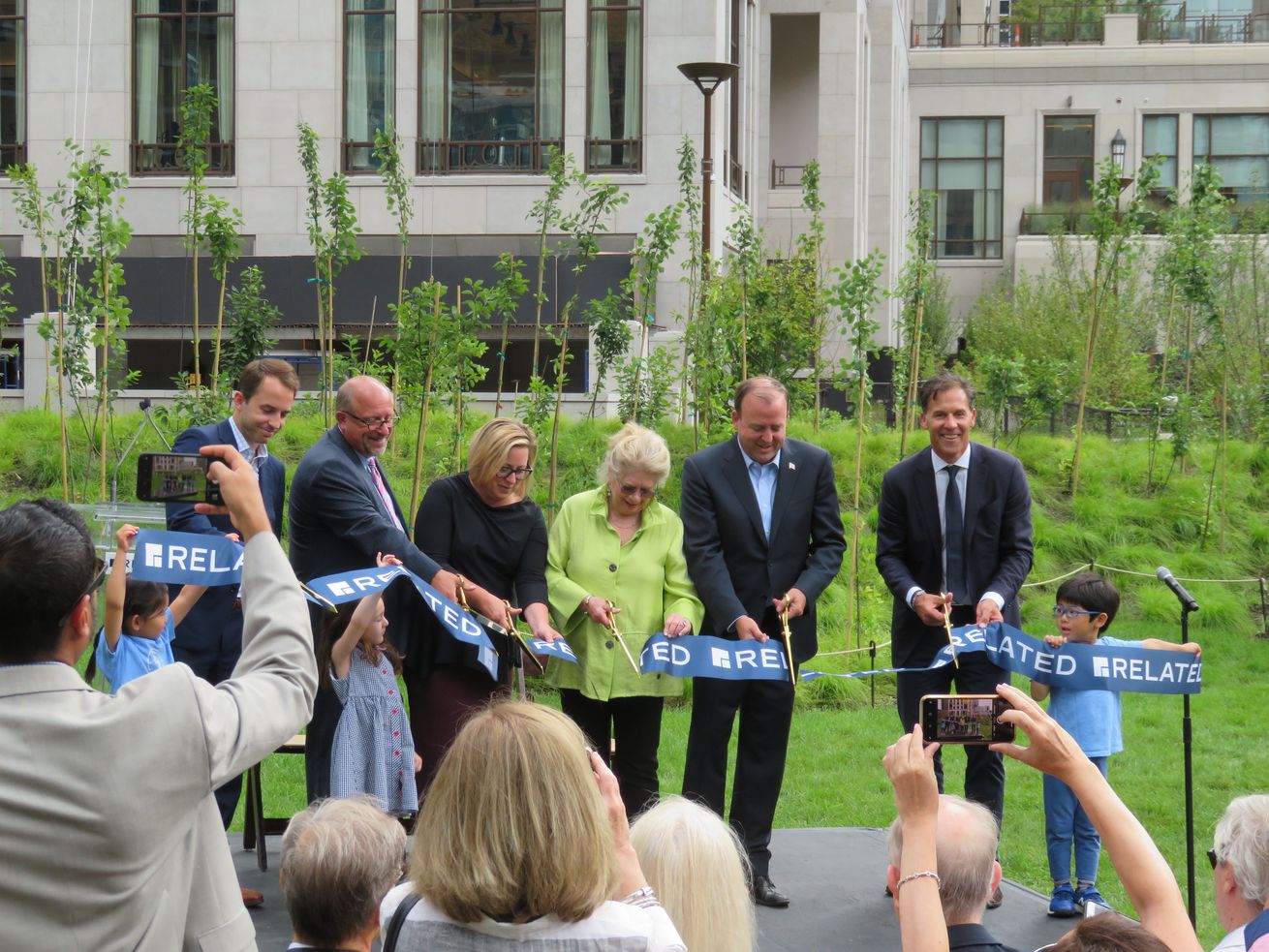 The 2-acre green space is officially open to the public. | Jay Koziarz

Named for architect Edward H. Bennett, who co-authored the influential 1909 Plan of Chicago with Daniel Burnham, the parks operates more or less in-line with regular Park District hours. The dog areas will be open to the public 24 hours a day.

The new Streeterville park sits atop an underground parking garage that served as a staging area during One Bennett’s construction. Before that, the site bordered by McClurg, Peshtigo, Grand, and Illinois was home to the less successful Parkview West green space that saw little action beyond occasional use as a dog run.

“This space was here, but it wasn’t utilized very well,” explained Related Midwest president Curt Bailey. “It wasn’t a great place to be. Maybe if you were a dog, but for everyone else, it really wasn’t. When we sat down with Alderman Reilly and SOAR seven or eight years ago, we focused on creating that great place.”

In a recent column, Chicago Tribune architecture critic Blair Kamin praised Bennett Park but feared it might fall victim to its own success and be “loved to death.”

“We think people using the park is a great thing,” Bailey told Curbed Chicago when asked about potential overuse. “Van Valkenburgh specifically designed the park to be used by all of the buildings in the area, and we absolutely encourage that.”

“Our architecture team employed a tactic called ‘defensive design’ that uses low railings and plantings to direct people to where they are supposed to walk and keep them away from places they shouldn’t,” added Related’s Ann Thompson.

The company presented its two-tower plan for the long-dormant parcel last spring, but Reilly ultimately rejected the proposal. “It is my hope that in the next few months we’re able to make progress with Related on the Spire site,” the elected official said Tuesday. “There’s a great opportunity to add even more public space just down the street at DuSable Park.”

Slated for a 3.3-acre peninsula east of Lake Shore Drive, DuSable Park was first dedicated as public open space in the 1980s but never materialized. As part of its agreement to redevelop the former Spire site, Related has pledged $10 million toward the Park District-controlled project.