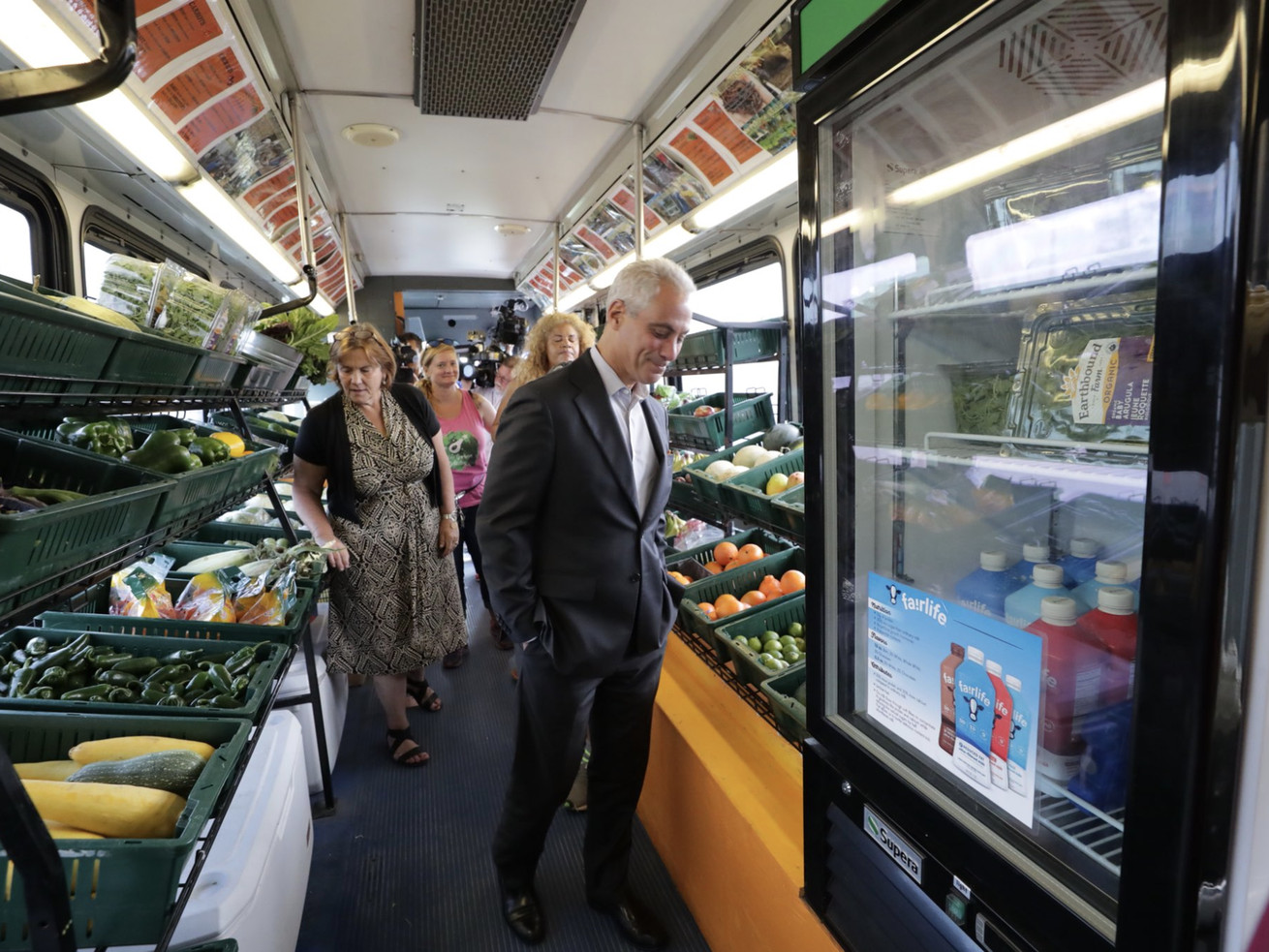 Urban Growers Collective has seven farms on 11 acres of land

The Fresh Moves Mobile Market, created out of retired CTA buses, recently hit a milestone of serving fresh produce to more than 10,000 people on the South Side. The market, run by Urban Growers Collective, is just one way the nonprofit works to help residents.

Currently, three buses are retrofitted with bins for produce and grocery items. Only one operates seven days a week, but UGC hopes to get all three up and running after licenses get sorted out.

What is special about Fresh Moves Mobile Markets is that most of its produce is grown on the South Side and farmed by locals. However, the goal is to connect with residents, and that sometimes means carrying familiar items, Sims says, which is why the markets include non-native products such as bananas and oranges. In addition, the Fresh Moves program helps residents figure out how to put together a meal, features cooking demos, and provides heart-healthy and sugar-free recipes.

Those who hop on board to shop can pay using cash, debit, or credit. The market also accepts SNAP benefits and, Farmers Market Nutrition Program Senior and WIC coupons which get double value. When the market stops at schools, it sells healthy after-school snacks priced to compete with vending-machine options.

“It’s not just a lack of food, it’s a lack of resources,” Sims says. “You can have a beautiful grocery store, but if folks can’t afford it, that’s an issue.”

Education is a major component of UGC. It takes on 300 teens as interns every year, helps new farmers with technical assistance, and offers an 18-month job training program with Heartland Alliance to formerly incarcerated adults. One of UGC’s farms, Educare PreSchool Farm, provides gardening classroom sessions and experiences like the spiral sensory garden. There are also educational workshops on agriculture, small-business development, and equality building.

A post shared by Urban Growers Collective (@urbangrowerscollective) on May 10, 2018 at 9:29am PDT

UGC was formed by Sims and Erika Allen in 2017 after Growing Power, a similar urban farming and education nonprofit, shut its doors after 25 years. The organization now carries on a mission to guide communities to opportunity through activism and food. The goal is even represented in its logo: a drinking gourd. That’s another name for the Big Dipper, and comes from the underground railroad song “Follow the Drinking Gourd” which directed enslaved people north to freedom.

There are plenty of ways to get involved with UGC: Become a volunteer, join a goat yoga class, take an agriculture workshop, or make a donation. Find out the where the Fresh Moves Mobile Market will be this week, and check out other news about UGC, on Twitter, Facebook, or the website.

You all!! Saturday’s weather looks heavenly, which means GOAT YOUR YOGA ON! All of our dreams are coming true. Yoga begins promptly at 10am. The farm is located at 8900 S Greenbay Road. Free parking. BYOM. $25 when you arrive — cash or credit. #goatyoga #cityfarm #dreamsdocometrue

A post shared by Urban Growers Collective (@urbangrowerscollective) on Aug 9, 2018 at 8:38am PDT