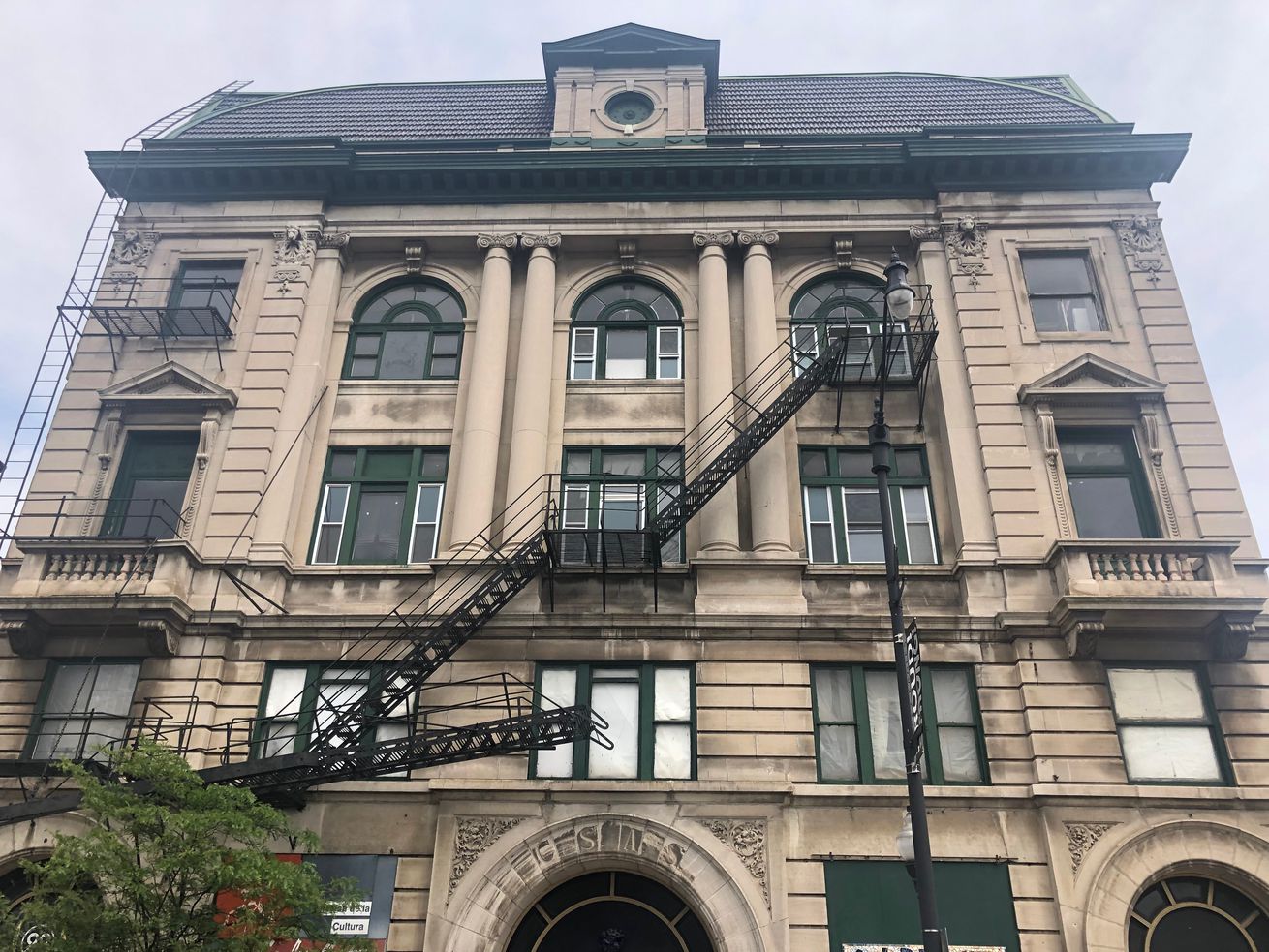 A historic district could protect two endangered buildings that once defined the Czech neighborhood.

It’s fitting that the words “Plzensky Sokol” etched into the stone facade of a vacant building in Pilsen are now covered up by a temporary “For Lease” banner.

The history and legacy of Sokols, which are buildings that housed Czech social, cultural, and athletic clubs and once thrived in the Chicago area, have largely been forgotten. As a result, dozens of the historic century-old facilities are gradually disappearing.

“A lot of them are being torn down and we’re losing a lot of history,” said Paul Lebloch, a past president of the World Sokol Federation. “It’s sad they don’t honor these historic places and the people who built them.”

In rapidly gentrifying Pilsen, two endangered Sokol buildings remain: The Plzensky Sokol at 1812 South Ashland Avenue and the Czesky Slavonsky Americky Sokol at 1436-1430 West 18th Street. But they may have an ally in the city of Chicago. Last month, the Chicago Landmarks Commission voted in favor of establishing an official Pilsen Historic District to help preserve a wide swath of the aging Bohemian structures, including both remaining Sokols. The City Council has yet to rule on the final proposal, which would solidify protection for the historic buildings.

The history behind Czech Sokols

The American Sokol—six of which remain in the Chicago area—function a lot like YMCAs these days, but that wasn’t always the case.

Adapted from the Czech word for “falcon,” Sokols originated in Prague in 1862 at a time when the Czechs were ruled by the Austro-Hungarian Empire and lacked a homeland. Both Sokols and the closely related Polish Falcons were inspired by the Turnverein, fraternal gymnastics societies in Germany from the early 19th century meant to improve physical, mental, and moral fitness (“A strong body in a strong mind” was the slogan). Members dressed in military-like uniforms and practiced martial activities: marching drills, weightlifting, and fencing.

The nationalist nature of Sokols helped unite the Czech people. “If it wasn’t for Sokol, there wouldn’t be a Czechlosavkia,” said Robert Tomanek, a University of Iowa professor currently writing a history of Sokol. But, it angered top officials which explains why they were banned by their German occupiers in World War I, then Hitler and the Nazis in World War II, and also the Communist Party in 1948.

How Sokols emerged in Chicago

Chicago naturally became a hub of American Sokols in the late 19th century because of the rapidly growing metropolis’ Czech population, which ranked third in the world—behind only Prague and Vienna. The first Sokol appeared here in 1871 when the newly formed Gymnastic Unit Sokol of Chicago became owners of a building on Clinton Street near Van Buren in the West Loop.

That same year, the Great Chicago Fire prompted the city’s Czech population to migrate further southwest to the Pilsen. The original Sokol building in Pilsen was the Cesko-Slavonska Podporujici Spolecnost (CSPS) constructed in 1886 but it burned down in 1918. Meanwhile, the Czesky Slavonsky Americky Sokol (CSAS) on 18th Street was built in 1893 and expanded to a grandiose five-stories in 1902. The Classical Revival style building, designed by Bohemian architect Frank Randak, boasted a 2,000 seat theater, a series of meeting rooms, and a saloon.

Plzensky Sokol emerged as a 21-man gymnastics unit in 1879, but didn’t actually claim a permanent home until 1892. It took three years and $35,718 (almost $1 million when adjusted for inflation) to finish the three-story, Romanesque-style hall near the corner of 18th Street and Ashland Avenue—which included the first-ever indoor pool for a Sokol. “It was considered a thing of beauty and the most modernistic Sokol gymnasium and public building of that era,” according to Tomanek.

That Sokol also played host for Czech Day at the iconic 1893 World’s Columbian Exposition in Chicago. During Czech Day, 20,000 participants paraded down Ashland Avenue and listened to a concert directed by composer Antonin Dvořák. In addition, the Sokol hosted a weeklong Czech athletic gathering (a “slet” in Sokol terminology which means “gathering of the falcons”) where hundreds of men, women, and children performed in a mass calisthenics demonstration and 194 men competed in a gymnastics competition.

The athletic legacy of Plzensky Sokol is unparalleled: The gymnastics team won “every prize available” from 1911 to 1922, according to a 1960’s American Sokol newsletter, and the championship indoor softball team was led by Chicago Bears legend George Halas and his brothers Walter and Frank—all of whom were members. In 1925, 40,000 people at Soldier Field watched as 3,478 gymnasts competed in a five-day National Sokol Tournament including a group of Pilsen women who won first prize.

Important political figures also emerged from Chicago’s Sokol halls. Czech-born Anton Cermak who became mayor in 1931, and was assassinated two years later in Miami by a gunshot meant for FDR, was a Sokol member in Pilsen.

The Sokols and large facilities like the Bohemian-built Thalia Hall, were more than just physical fitness centers. They acted as Czech community centers; a parallel institution to the Catholic Church at a time when as many as 70 percent of the Czechs in Chicago considered themselves non-religious and identified as “Freethinkers” or “Rationalists.”

You could attend educational classes, listen to lectures, visit libraries, see choral groups, theater, and other entertainment—all in the same building. “…free public entertainment at the Plzensy Sokol Hall,” noted a December 1896 Chicago Tribune article. “No tickets were needed for admission but the use of the Bohemian language was used as a password.”

A hope for restoration

But as the city’s 200,000 Czech immigrants began moving to the southwest suburbs like Cicero and Brookfield over the course of the early 20th century, the Sokols migrated with them. Then the Sokols themselves began bleeding membership because of men enlisted to fight overseas in World War II and the eventual assimilation of Czechs into American culture.

“The second and third generations were too far removed from the immigrants,” said Tomanek. “Eventually the Sokols got watered down.”

The Plzensky Sokol building was sold to the Polish Falcons in 1944 and it has changed hands multiple times since then. It currently sits empty and dilapidated—though real estate company Frontline Properties is trying to lease it. The company declined to comment, and hung up after learning they were speaking with a reporter.

The CSAS building also changed hands over the late 20th century and in 2000 became the Asociacíon Pro Derechos Obreros, or the Association of Workers’ Rights (ARO). In recent years, it’s served as a community center to the Mexican population that moved in to replace the Czechs—a kind of Latino Sokol, if you will—but the ARO has also fallen on hard times.

Leticia Guerrero, who manages the building’s daily operations, said she’s determined to restore the building to its former glory but that it’s in poor condition and needs lots of expensive work.

“It’s in dire straits,” she said. “We’re looking for the resources to make it happen. Right now it’s our own blood, sweat, and equity.”