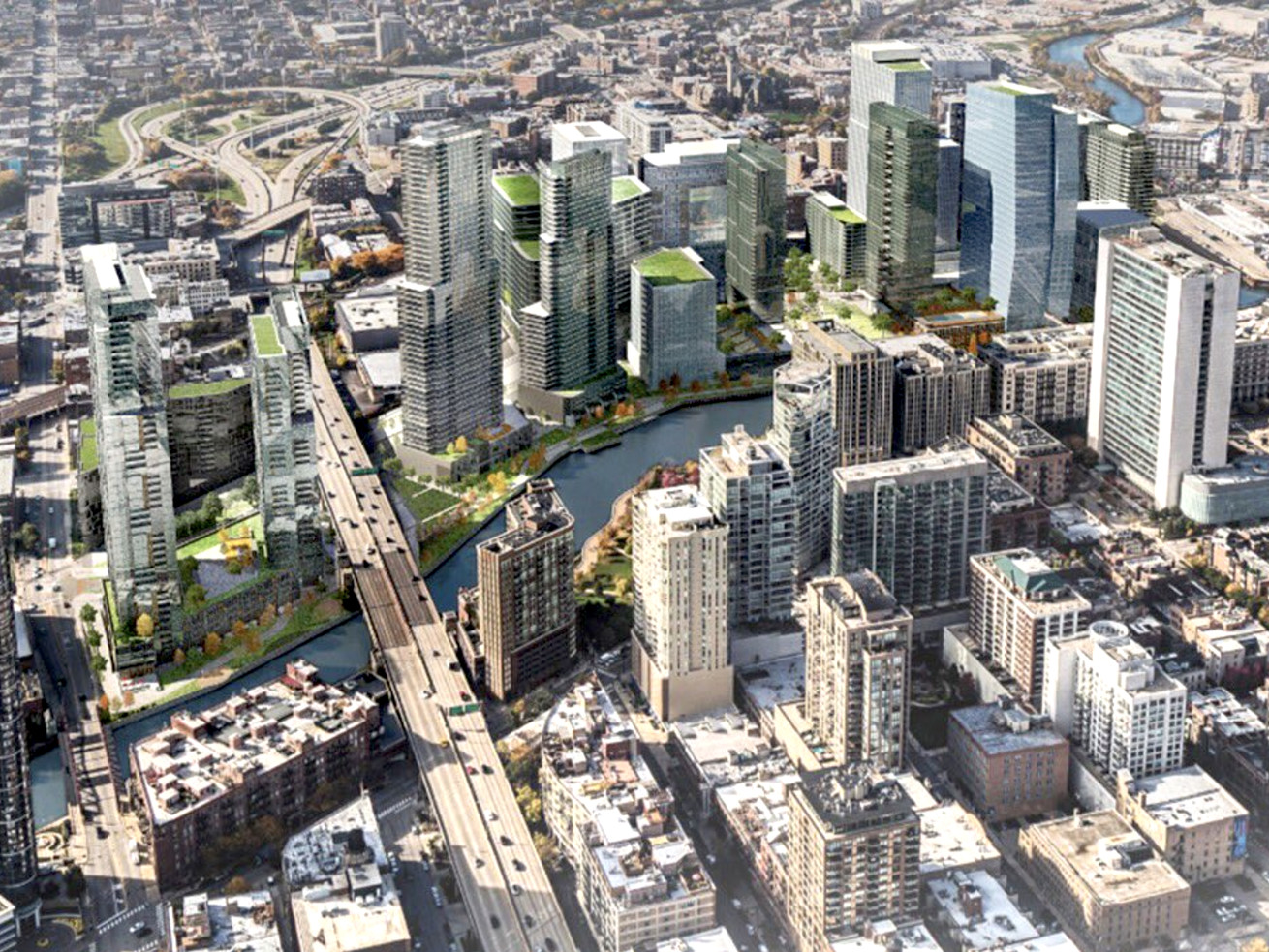 Chicago’s unprecedented high-rise construction boom can add another nine towers to its pipeline after a mid-sized-city’s worth of new proposals earned the key approval of the Chicago Plan Commission on Thursday.

With such a packed lineup of high-profile projects, October’s meeting was a lengthy, all-day affair—running from 10 a.m. to 4 p.m. The six-hour session at City Hall concluded with every project winning the official thumbs up from the commissioners.

Only one item from the draft agenda, the University of Chicago’s plan to build a 12-story hotel on Hyde Park campus, was deferred to a later date.

Here’s a look at what was approved:

Phase 1 of the plan, located between Grand Avenue and the Ohio Street feeder ramp, includes four buildings, ranging from 124 feet to 508 feet, with 1,500 units between them. The developer would offer 300 of the units at affordable rates, and create a new, 1.6-acre riverfront park pic.twitter.com/6kduBhOzEC

The ambitious, multi-phase plan by Tribune Media to redevelop its 30-acre waterfront parcel in River West was hands-down the biggest project to move forward. Stretching from Chicago Avenue to Grand, the $2.5 billion River District megadevelopment will eventually comprise 14 mixed-use buildings supporting an estimated 4,100 apartments and 19,000 jobs.

Thursday’s meeting focused, however, only on the project’s first phase—a quartet of residential buildings slated to rise south of the Ohio-Ontario feeder ramp at the Tribune’s current truck mashalling yards. Rising to the respective heights of about 500, 300, 150, and 120 feet, these first structures will contain 1,500 combined residential units and roughly 500 parking spaces.

The Solomon Cordwell Buenz-designed masterplan calls for new roadway connections including an extension of Jefferson, Ohio, and Erie streets. Additionally, an existing north-south right-of-way though the site will add a shuttle bus service to and from the commuter rail stations to the south and a potential future transitway currently being studied by CDOT.

Open space will make up 50 percent of the total River District site in the form of new public riverwalks, parks, plazas, and cafes. Renderings show a new “under-feeder park” below the Ohio-Ontario ramp with a playground and dedicated food truck area.

Work on the River District’s $305 million first phase could begin as soon as 2020, the development team told the commissions. Future phases, which were illustrated with placeholder building designs, will break ground based on “future market conditions.”

The River District was one of several Chicago sites toured by Amazon reps as part of the tech giant’s ongoing search for its HQ2 second headquarters.

Not to be outdone, Chicago’s Lakeshore East community got approval to add four tall buildings of its own.

The first, known as Parcel O, will rise 600 feet in a vacant slot wedged between Aqua tower and the Blue Cross Blue Shield Building. The blocky structure from Magellan Development and bKL Architecture will include two hotels with 570 combined guest rooms, 640 rental apartments, and 146 parking spaces that will connect to Aqua’s existing garage.

At the northeast quadrant of Lakeshore East, Megellan and partner Lendlease received preliminary approval to build a cluster of three residential towers. Also designed by bKL, the trio includes a 430-foot, 600-unit rental building at Parcel K/L; a 550-foot, 500 unit condo building at Parcel J; and a striking 950-foot-tall, 600-unit skyscraper at Parcel I that will cantilever eastward towards the lake.

The I, J, K/L buildings will rise atop a shared, 53-foot podium containing 1250 parking spaces. The $1.1 billion plan also calls for new street-level landscaping between the towers and a publicly accessible “valley park” that will descend from upper Harbor Drive to below Lake Shore Drive, thus connecting the downtown neighborhood to the lakefront.

The phased development will begin with the shorter rental building and conclude with the skyline-altering Parcel I tower. The developers expect total construction to take between five and seven years.

Commission approves new Union Station-area plan that will permit a one-story addition to the “Head House” building, with 400 hotel rooms, and a new 50-story office tower across the street featuring a 1.5-acre public park. pic.twitter.com/bTdMzVZCWz

Under the plan, the landmarked Beaux Arts headhouse building will get a one-story penthouse addition and its vacant upper floors converted into 400 hotel rooms. The slight vertical expansion replaces an earlier, controversial proposal to tack-on a blocky seven-story apartment complex atop the 1925 structure.

The Plan Commission also approved a zoning change supporting a 715-foot-tall office building just south of the station. Replacing an Amtrak parking structure, the new building features a stepped, three-tiered design from Goettsch Partners. The high-rise will be accompanied by a 1.5-acre public park capping a 400-space parking garage.

With BMO Harris Bank reportedly in advance negotiations to anchor the proposed tower, Union Station’s glassy neighbor appears to be on the fast track to construction.

Commission approves a unique public-private plan at Illinois and Dearborn in #RiverNorth. The proposal includes a 455-foot office tower with an Engine Co. 42 @ChicagoFireDept firehouse at its base. pic.twitter.com/7aHN3ypvFH

This creative private-public partnership will see River North’s aging Engine No. 42 firehouse replaced with a state-of-the-art facility topped by a 455-foot-tall office building. The two-phase project will see the new firehouse built next to the 50-year-old, brutalist-style station.

Once the new public safety facility is operational, work can then begin on the 29-story, Goettsch-designed high-rise addition. The tower will feature a glassy facade, below-ground parking, corner balconies for office tenants, and a 28th-floor amenity deck.

Commission approves a 41-story, 356-unit plan with first-floor retail at 353 W. Grand Ave. The developer of the $90 million project will pay $5.8 million into the #ChicagoNOF system and offer 36 affordable units on site. pic.twitter.com/H8fJiLDPso

Though the parking ratio is higher than many new apartments developments, the project will be built to “condo grade” and provide the opportunity to convert from rentals at a later date, should the market move in that direction. The development will include 36 affordable rate units on site.

The Plan Commission also approved a pair of low-rise projects from Structured Development in Lincoln Park’s Clybourn Corridor. The first, at 1450 N. Dayton Street calls for a mixed-use commercial building, a neighboring private park that will be open the public, and a three-story community recreation building that will serve as a new home for the nearby Menomonee Club for Boys & Girls.

The current Menomonee Club site at 1525 N. Dayton Street will be redeveloped into an eight-story residential building containing 197 units and 56 parking spaces. Both projects come from architecture firm CallisonRTK.