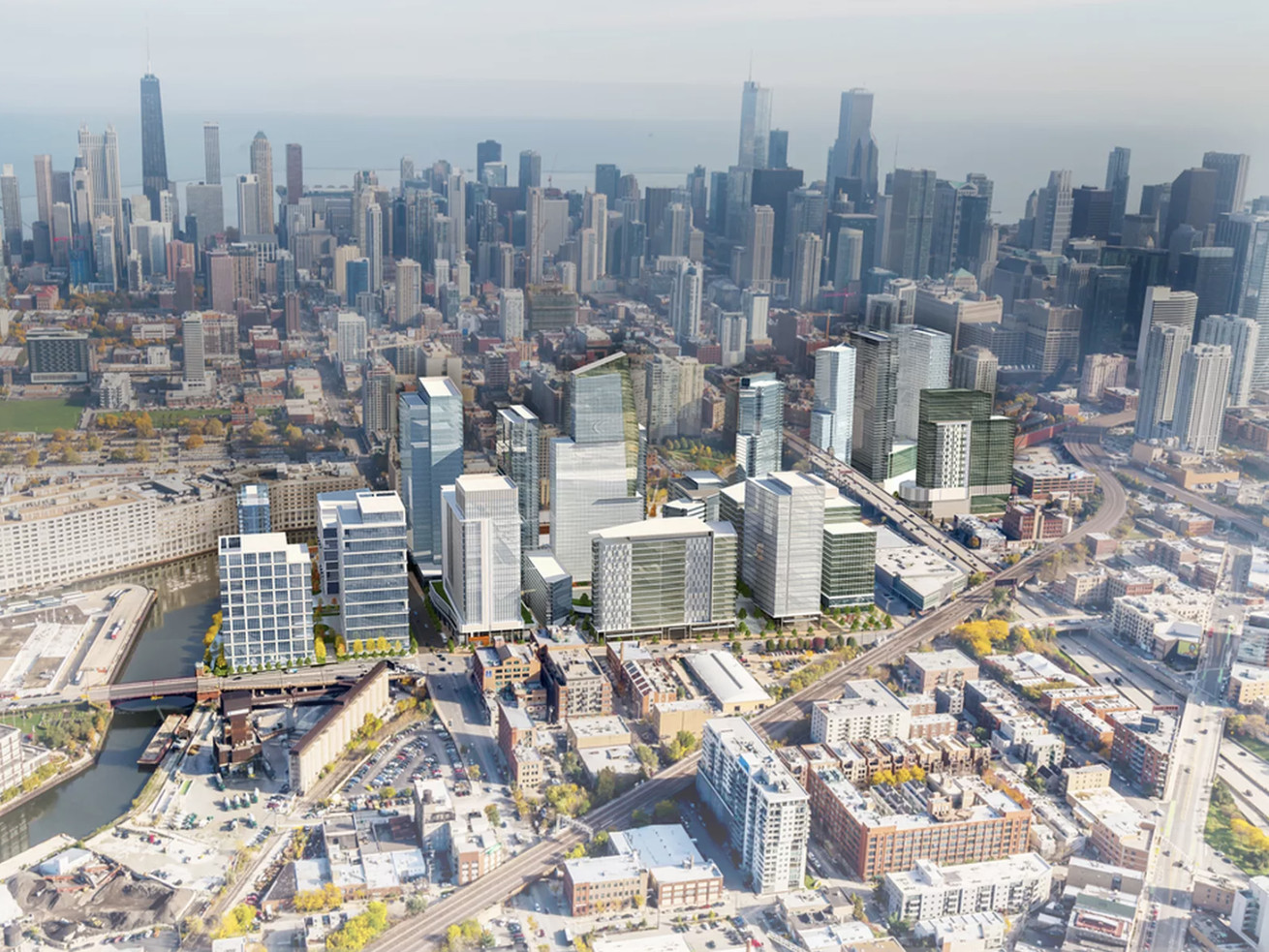 October is shaping up to be a big month for the Chicago Plan Commission, based on its newly released agenda. The commissioners are set to consider a whopping 12 high-rise buildings containing thousands of new residential units, hundreds of hotel rooms, and millions of square feet of office space.

The influx of proposals is an encouraging sign for the city. Meanwhile, the healthy mix of rental, condo, office, and hospitality uses drive home the point that Chicago’s current building boom is more than a one-trick pony.

Here’s a quick look at the high-profile projects up for approval later this month.

The transformative redevelopment of Tribune Media’s sprawling River West printing and distribution complex is looking to move forward. Known as the River District, the waterfront project will eventually include 14 mixed-use buildings with nearly 4,100 residential units.

The first phase of the project will focus on the southern edge of the 30-acre site, near the intersection of Grand Avenue and a proposed northern extension of Jefferson Street. Here, developers are looking to construct four buildings with a combined 1,500 dwelling units. The phase one quartet will rise 508, 378, 154, and 124 feet, according to Plan Commission’s agenda.

The River District is one of three massive riverfront megadevlopments in the works, joined by Lincoln Yards and The 78. All three sites were toured by Amazon representatives this summer as a potential sites for the company’s highly publicized search for its HQ2 second corporate headquarters. The River District is the first of the three to go before the Plan Commission.

Renderings of the site’s master redevelopment plan were initially shown to the public 12 months ago. A updated design from architecture firm Solomon Cordwell Buenz (SCB) is likely to debut at October’s zoning presentation.

This cluster of three residential towers is slated for the undeveloped northeast corner of Chicago’s Lakeshore East master plan. It includes a 40-story rental building at “Parcel K/L,” a 50-story condo tower at “Parcel J,” and an 85-story condo skyscraper at “Parcel I.” The latter is expected to rise 950 feet—although it’s unclear if that figure takes its sizable parking podium into account.

The I, J, K/L plan comes from developers Magellan Group and Lendlease and designers at bKL Architecture. When complete, the multiphase project will feature a combined 1,700 residential units, 134,000 square feet of green space, and a new neighborhood connection to the lakefront.

Separate from the trio of towers mentioned above, Lakeshore East’s Parcel O tower is slated for the vacant site between Aqua and the Blue Cross Blue Shield Building. Another collaboration between Magellan and bKL, Parcel O will rise 610 feet and contain 640 apartment units and 570 hotel rooms.

The tower is moving forward “as of right” without a zoning change. It will, however, require the approval of the Plan Commission under the Lake Michigan and Chicago Lakefront Protection Ordinance.

Just three weeks after presenting a revised plan for Chicago’s Union Station, Riverside Investment & Development and Convexity Properties are pushing ahead. The current plan ditches a controversial apartment addition above the station, opting instead for a 400 hotel rooms to be contained inside the historic headhouse and a new single-story penthouse level.

The developers are pressing forward with phase two which calls for a 715-foot office tower and plaza at the site of an existing Amtrak parking garage. Early reports suggest that BMO Harris Bank is lining up an anchor lease in the new building, designed by Goettsch Partners. The station’s adaptive reuse will be overseen by architecture firm Solomon Cordwell Buenz.

Slate for the site of River North’s now-closed Clark & Barlow Hardware, this 452-foot-tall apartment building comes from developer Onni Group and Brininstool + Lynch. If approved, the project will deliver 356 rental units, 261 parking spaces, ground-floor retail, and a new pocket park fronting Orleans Street. It was last presented to the community in June.

This proposed public-private partnership between the City of Chicago and Friedman Properties aims to replace River North’s Engine Co. 42 firehouse with a new Chicago Fire Department facility topped by a glassy 455-foot office tower designed by Goettsch Partners. The project would be built in two phases, starting with the fire station.

A plan to construct a high-rise hotel on the U of C’s Hyde Park campus will be part of a informational presentation to commissioners. Described as 12 stories and 155 feet tall, the building is considerably shorter than the 15-story, 190-foot hotel proposal unveiled by the school back in spring 2017. The South Side project is not seeking any zoning changes to its existing Planned Development documentation.