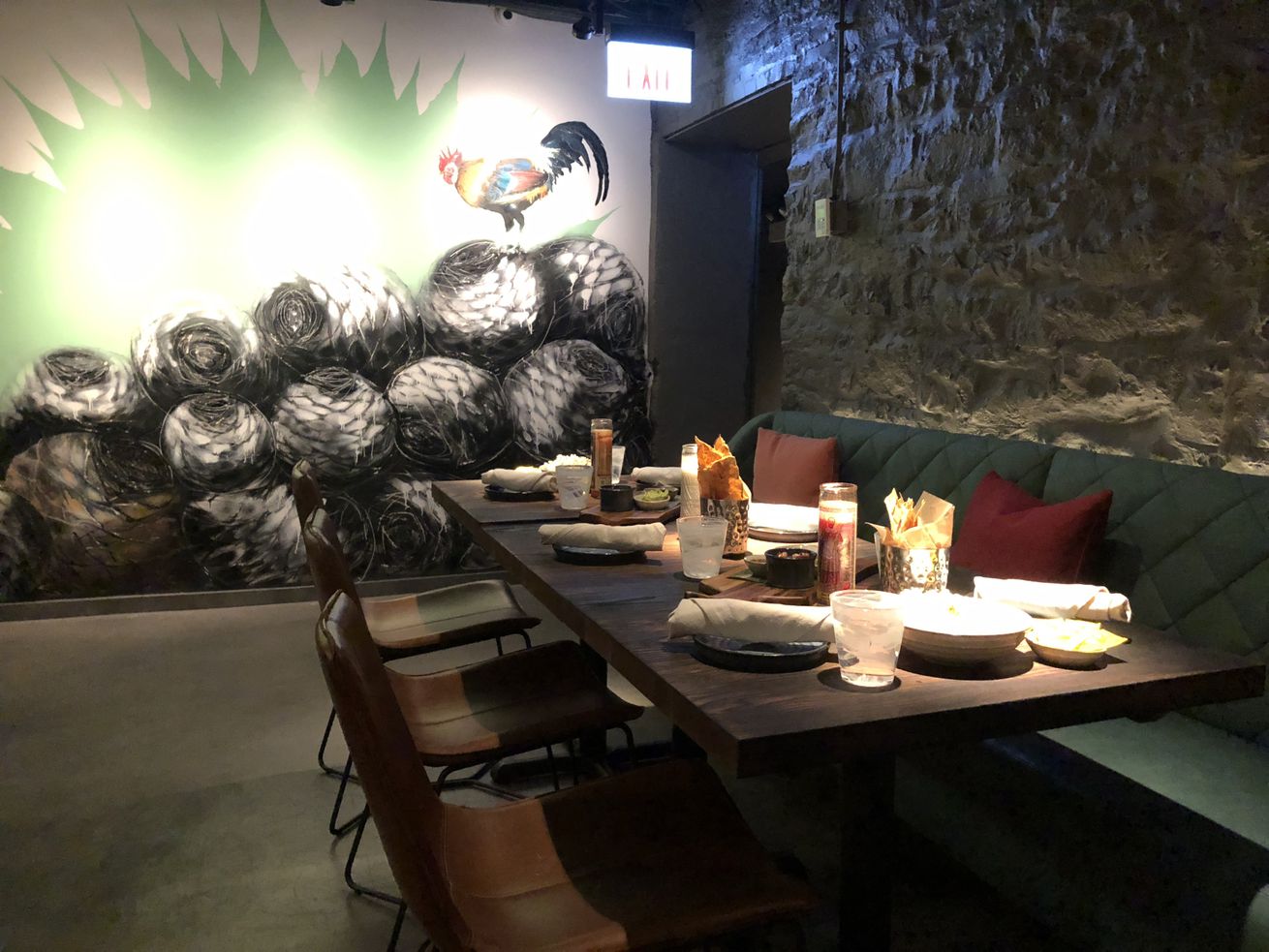 Enter through the alley to get into Bar Sótano

Rick Bayless, the celebrity chef who made upscale Mexican food a hit in Chicago, opens his first bar tonight right underneath Frontera Grill in River North. Bar Sótano is a dimly lit and narrow space where customers will enter through an alley a few steps away from another neighborhood speakeasy, Three Dots and a Dash. Bayless’ daughter, Lanie, picked the bar’s spirits.

Lanie Bayless wants customers to know that Bar Sótano isn’t just about mezcal. The bar’s ceviche is even made with sotol — many of the food dishes include an agave spirit. That’s just indicative of the collaborative philosophy between the Baylesses and staff, from chef Rishi Manoj Kumar to bar manager Roger Landes. For more about the paella and other dishes on Kumar’s menu, click here.

The soundtrack downstairs is more youthful, and the Baylesses predict the clientele will be younger, too. Landes described the music as a blend of classic and modern hip-hop mixed with R&B. Lanie Bayless wants the space to feel like a stroll through a Mexican market where she and her father saw vendors use a variety of dried herbs in delicious ways. They’ll likewise use rosemary, lemongrass, green anise, chamomile, and green chartreuse in the food and drink. They’re growing some of those herbs at the restaurant. While it isn’t FDA certified, there’s a feeling these herbs could improve health. But it’s not a gimmick, Rick Bayless insisted, it’s also about enhancing flavors.

“We want people to enjoy themselves,” he said.

Back to the mezcal, the Mexican spirit that chef Bayless said essentially captures the country’s spirit. Besides a bevy of rare selections on the bar’s shelves, the Baylesses will also serve two house mezcals — both from the same Oaxacan distillery, the barill and cuishe. They’ll deploy both in a variety of ways.

The cocktails are playful. A mango chamoy drink comes street market-style in a clear plastic bag with a straw popping through. The cocktail menu’s divided into four categories with four drinks each: The Fruit Stand, Botánica, Chile Stall, and Fonda. Within those categories, drinkers can find riffs on classic negronis, palomas and martinis for those in River North who aren’t adventurous.

But there’s enough for curious drinkers. One drink features chamomile-infused tequila and house-made root beer bitters. There’s not a drink in the chile section that will burn customer’s tongues. But the peppers, including ancho verde, jalapeño-infused tequila, and pasilla captivate.

“Since working here, chiles have become a very big part of my life,” Landes, who came over from the Smyth & the Loyalist, said.

The Fonda section mixes flavors usually found in food into the drinks. Using mezcal that tastes like chorizo, the tacos al pastor drink adds roasted pineapple, lime, and cilantro. Another drink, escabeche, is like a martini made with the juice found in the pickled vegetables set tableside at many Mexican restaurants. The guacamole drink isn’t super viscous. It’s made with mezcal, avocado, and spicy tomatillo syrup, and garnished with a combo of pickled veggies.

“It’s always going to be delicious not matter what,” Lanie Bayless said.

The space for Bar Sótano opened up when Bayless moved Frontera Foods to Merchandise Mart. After conquering TV, the grocery store, and the restaurant world, the Bayless family is ready for the bar scene. Bar Sótano opens tonight.