Renovated Bridgeport cottage is an ode to the ’80s 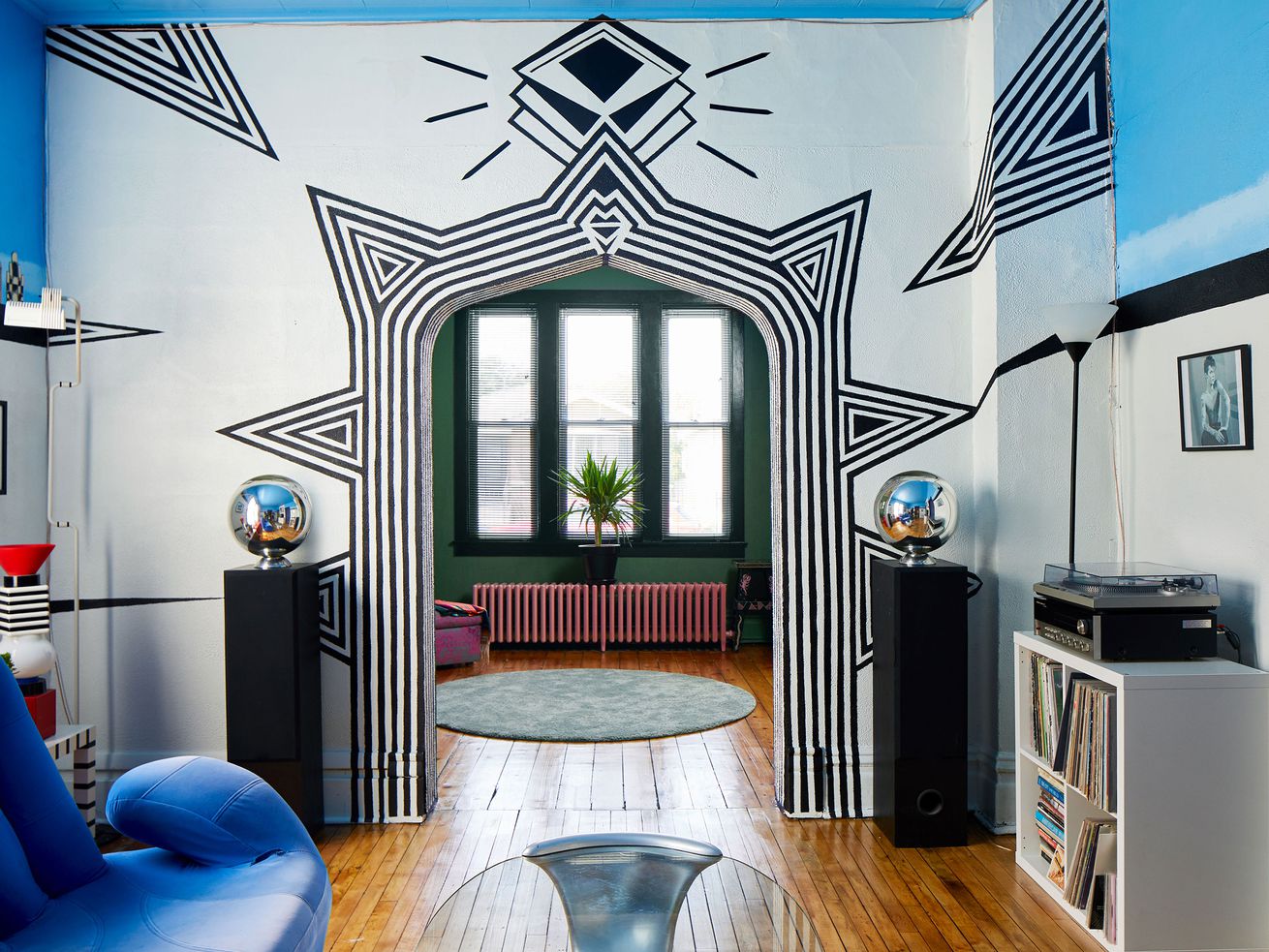 And it’s as colorful as you’d expect

Meg Gustafson is a big fan of the artist Duggie Fields, who once wrote that maximalism is “minimalism with a plus, plus, plus.” That sentiment is on full display in her 1885 Bridgeport worker’s cottage turned 1980s playland, all in homage to a decade that’s seen a resurgence as of late.

A single-family home wasn’t exactly what Gustafson, a planner for the City of Chicago, was looking for when she went in search of a place to buy in 2018. She had her sights set on a two-flat, hoping to share the building, but not an apartment, with someone. However, she was continually getting outbid in the process, and was hitting her price limit, all while knowing renovations would cost tens of thousands of dollars on top of the sale price.

The 1,400-square-foot worker’s cottage that would ultimately become Gustafson’s had been in one family for 85 years, elevated on wooden pillars after the streets were raised in the 1910s.

“This place wasn’t immediately my first choice, but it turned out to be great because everything it needed was pretty cosmetic,” says Gustafson. Her offer was accepted and she started renovations last January, a process that ended up taking mere days (thanks to good timing and available contractors). Workers removed drop ceilings and fluorescent lighting to expose 10-foot ceilings; in the kitchen, one was hammered tin. Carpet and layers of linoleum came up to reveal original pine and maple floors that was refinished; and stained floral wallpaper came down to provide a blank slate for Gustafson and her roommate Amber Mortensen, who helped envision the interior design and runs a location shoot agency.

“I had lots of ideas, but didn’t know how they were going to translate” Gustafson says of her early thoughts on how to meld her love of the 1980s with her new 1880s house. She has an eye for the 1980s, having run an ’80s-themed interiors Tumblr starting in 2014 that has recently migrated to Instagram, and has grown to showcase all sorts of memorabilia and design. The craze around midcentury modern furniture and styling drove her further into a love affair with the zaniness of postmodernism.

The house is a simple structure clad in a melange of brick typical of the style, and the only clue to what lies inside is the structure’s cherry-red door, which acts as an inviting wink to passersby. From January to March, Mortensen and Gustafson transformed the interiors from humble turn-of-the-century to over-the-top and spirited, working room by room. It immediately brings to mind the colorful sets of Black Mirror’s ‘San Junipero’, the drama of Maxine’s apartment in Russian Doll, and the exuberance of Fields’s artwork, to which the electric blue living room is dedicated.

While Gustafson and Mortensen wanted to paint several rooms monochromatically, the foyer ended up being the only space in which they went through with the idea, painting the floor, ceiling, walls, and coat-rack in royal blue. “We got the idea from a house we saw while picking up our dining room table via Craigslist,” says Gustafson.

Gustafson wanted to create a space in the front room that would be suitable for intimate gatherings, so she sprung for a dark and moody shade of green that creates a backdrop for bright reds and pinks. Megan Diddy, an artist friend of both Gustafson and Mortensen, designed the graphic black-and-white mural that graces the arch between the front and living rooms.

The backdrop in the living room is inspired by PeeWee’s Playhouse and an exhibition of Fields’s work held in Glasgow a few years back, in which he recreated his London loft with a blue ceiling and a black line painted a third of the way down.

The kitchen keeps things bright and cheery with pops of color, and the roommates replaced the faucet, installed black stripes across the backsplash, and added chrome switchplates and contact paper to the countertop edges. A gray countertop found at a thrift store was installed over the radiator and more than doubles the counter space in the room.

The dining room skews dark and delightfully over-the-top; it features a mix of items from all over the world—plus a thrifted chrome-and-tinted glass Milo Baughman table. Mortensen and Gustafson’s bedrooms embody a more restrained energy. One embraces warm, desert-like vibes. The other leans into a distressed European look. The tiki room “came together in about 20 minutes after a quick visit to Chinatown and, of course, now it’s everyone’s favorite room,” Gustafson says. A midcentury tiki bar, built by a friend of her grandfather’s, takes center stage.

The tiki room is an apt expression of Gustafson’s attraction to the push and pull between great design and something, well, a little more out there.

“I don’t want clutter, but I want wackiness,” Gustafson says of her home. “I want it to be weird and for people to be a little uncomfortable. We didn’t want anything to be too cute.”