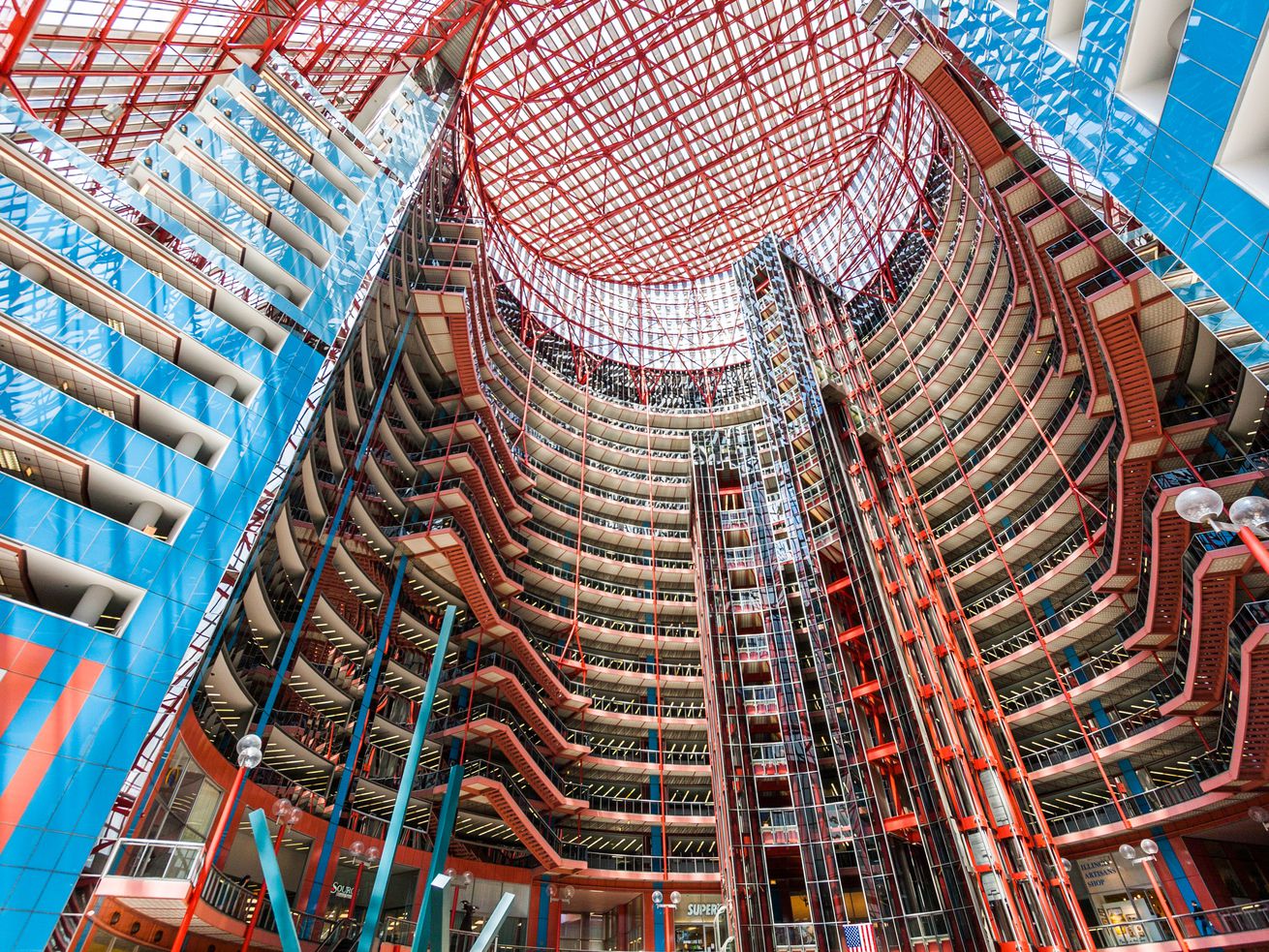 The battle to save the controversial public building is heating up

On Tuesday, a coalition of concerned citizens, preservationists, architects, and artists assembled outside Chicago’s James R. Thompson Center to call on the city to give landmark status to the postmodern building.

Designed by renown architect Helmut Jahn, the state-built Thompson Center opened in 1985 as a bold, polarizing experiment embodying the idea of government and citizens coming together in a transparent civic space. After 33 years of cooling and heating issues, mounting maintenance costs, and crumbling state finances, that lofty dream could be coming to an end.

Illinois Governor Bruce Rauner has made repeated calls, starting in 2015, to sell the building as a potentially lucrative redevelopment site. Rauner and his political allies even rolled out their own renderings showing the block-sized building and plaza replaced by a conceptual 1,700-foot skyscraper. While the legislation situation in Springfield remains uncertain, preservationists aren’t willing to take any chances.

“We shouldn’t be landmarking places because they are endangered,” explained Nathan Eddy, the creator of Starship Chicago, a 16-minute documentary advocating for the building’s preservation. “We should landmark on merit and significance. The Thompson Center meets all of the City of Chicago’s landmarking criteria. We’re simply asking the city to play by its own rules and protect this important civic monument.”

Stuck in a difficult position of being too new to be considered classic and too old to appeal to contemporary tastes, postmodern architecture is often a hard sell for preservationists as notable examples come under threat. Eddy and his colleagues, however, are buoyed by recent victories including the landmarking of Philip Johnson’s former AT&T headquarters building in New York following a hard-fought battle.

The documentarian, along with advocacy groups Preservation Chicago, Landmarks Illinois, DoCoMoMo, and AIA Chicago, organized Tuesday’s midday rally. The event culminated with a guest appearance by Shea Couleé of RuPaul’s Drag Race. The Chicago area entertainer performed a lip sync rendition of Aretha Franklin tunes aimed at getting the public to “Think” about giving the Thompson Center some “Respect.”

“We felt Shea Couleé really embodies the spectacular qualities of this building,” explained Eddy. “She represents inclusivity and openness and creative thinking. Her performance drew a big lunchtime crowd and got people excited. It was just perfect.”

“The event brought much needed awareness to a remarkable building, its public spaces, its outdoor plaza, and its public art,” said Ward Miller of Preservation Chicago, a group that named the Thompson Center as well as its accompanying sculpture by Jean Dubuffet to its annual list of most endangered buildings a number of times.

“We do outreach in many different ways, but being in the plaza in front of the Thompson Center allowed us to engage people on a personal level and ask Chicagoans to look at the building. ‘Is it important to you? Can you imagine it going away?’ Many of the people I talked to were puzzled by the idea of demolition. They naturally assumed that public buildings, plazas, and artworks are safe and off the table.

“The condition of the building is not the fault of the people, the residents of Illinois, Miller added. “We shouldn’t lose our public assets and architectural treasures because of poor decisions at the state level. We are asking people to look beyond the current condition of the Thompson Center and see it for what it really is—a work of art. One that belongs to all of us and shouldn’t be sold off to the highest bidder. Let’s get people talking and encourage good decisions.”

For Eddy, Tuesday’s gathering was only the beginning. “This is phase one of what is going to be an increasingly spectacular series of events that will cause people to see the building in a new perspective. We’re going to keep pushing for what the city itself should have already taken care of: the landmarking of an architectural icon. Stay tuned.” In the meantime, supporters of the landmarking effort can make their voices known by signing an online petition.

In April, Jahn unveiled renderings showing how the controversial Thompson Center could be simultaneously preserved and reimagined. The plan involved opening the atrium to the outdoors, enclosing the interior office balconies behind glass, and building a slender 110-story tower at building’s southwest corner.

Scenes from today’s rally at the James R. Thompson Center in Chicago, an effort led by Nathan Eddy (@saveourstarship) and @preservationchicago, and featuring a performance by @sheacoulee. Those who joined voiced support to landmark this one-of-a-kind building, included on LI’s #MostEndagered list the past two years. #SOS #PeopleSavingPlaces #landmarkstarshipchicago #saveourstarship