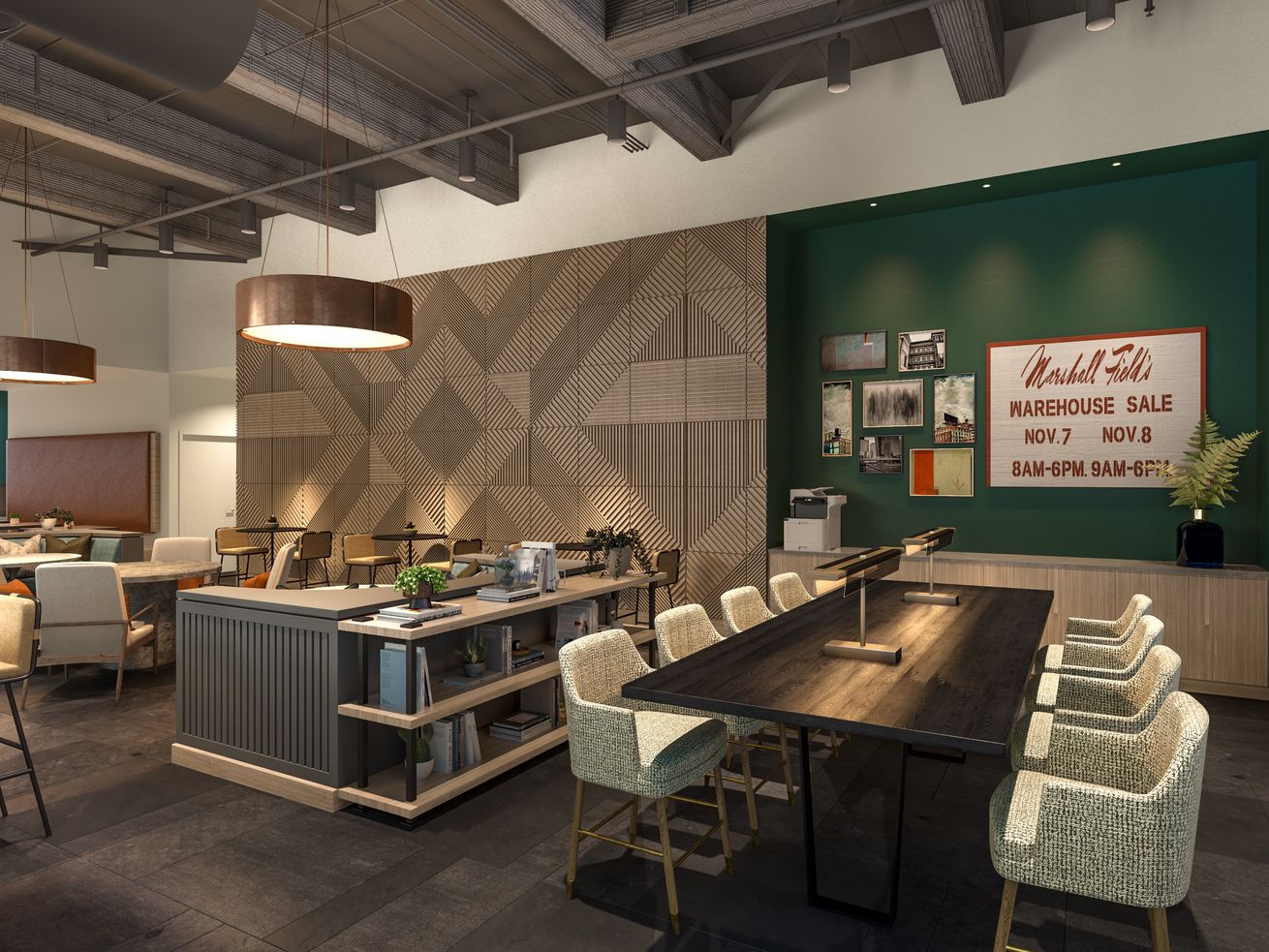 Already home to a growing number of businesses, the mixed-use renovation of Logan Square’s old Marshall Field’s warehouse will soon welcome its first residents. Dubbed the Field’s Lofts, the rental development will carve out 123 units from the 90-year-old industrial complex at the corner of Diversey Avenue and Pulaski Road.

Originally envisioned as 84 live-work spaces marketed toward startups, the plan later dropped the work requirement in favor of a higher number of smaller apartments plus a communal coworking space and a 3,000-square-foot rooftop deck addition. Other amenities include a fitness center, private yoga studio, party room, lounge, and ample bike storage.

The project, designed by architectural firm Hirsch MPG and Harken Interiors, takes many aesthetic cues from the building’s history such as incorporating an original Marshall Field’s clearance sign discovered during the renovation. The bygone department store’s iconic shade of green is also reflected on the building’s interior concrete columns, walls, and steel window frames.

The Field’s Lofts will contain mostly studio and one-bedroom units with two-bedroom apartments at the corners. The layouts are larger than comparable new studio and one-bedroom rentals in the neighborhood but probably 20 to 30 percent more affordable, said John McLinden, managing partner of developer Hubbard Street Group.

“A lot of renters have been priced-out of the neighborhood, but we’re able to deliver at a lower price point because we bought [the property] at a lower price,” McLinden told Curbed Chicago. “The product is also very different. These are loft-style units with 14 to 17-foot ceilings, original concrete columns, and large-scale industrial windows. It’s not just another white box in the sky.”

The upcoming rental units will join The Fields’s already occupied commercial spaces which include a 117,000-square-foot office lease by Crate & Barrel and retail tenants such as Cermak Fresh Market, Cubesmart self-storage, and a home design showroom for Studio41.

The commercial portion of the development was initially developed by Merit Partners, but that firm sold its stake to New York-based Knickpoint Ventures, reported Crain’s on Tuesday. The recent deal does not affect Hubbard Street’s involvement in the Logan Square project.

Pre-leasing for the Field’s Lofts is launching now and the first residential move-ins are expected to take place in January. More information on the project can be found on its website.