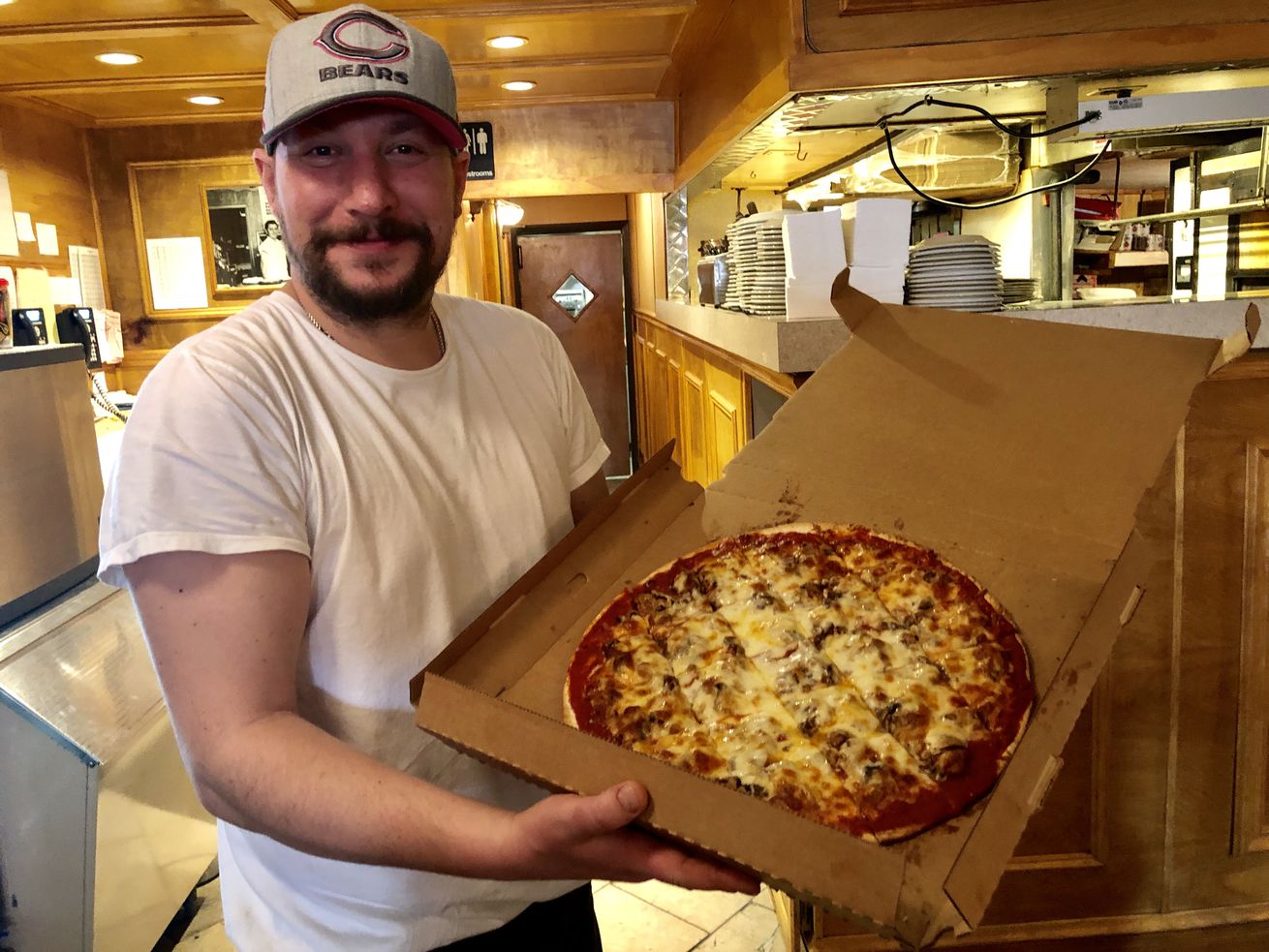 There’s a stretch of pizzerias on the city’s Northwest Side trapped in a time warp, a perfectly preserved area unaffected by the angry Internet pizza debates that have coursed through Chicago’s veins over recent years. They’re headlined by Dino’s Pizza, an old-school spot that just celebrated its 50th birthday, a place that specializes in thin-crust pies — the kind South Side stalwarts like Vito & Nick’s Pizzeria helped make famous.

Despite the unfamiliarity, Dino’s fits the tavern-style pizza description perfectly. Dino’s provided pizza to customers drinking at a nearby bar down the street, Tommy’s on Higgins. That was before Tommy’s built a kitchen. Joey’s grandparents, Umberto “Dino” and Tina Borrini, both Italian immigrants, founded Dino’s at 7004 W. Higgins Avenue. Customers won’t find bright HDTVs or fancy cocktails. They will see a battle-tested vintage Faulds pizza oven with rotating shelves. Faulds is an oven brand cherished by its owners.

Tavern-style pies have increasingly become a badge of honor for Chicagoans, particularly on the South Side. But lately, a narrative has risen over Chicago, the belief that thin crusts are what real Chicagoans eat and only tourists eat deep dish. It’s a response born in part by fatigue. Chicagoans are sick of TV sports crews constantly grabbing B-roll of deep-dish pizzerias while visiting Chicago to demonstrate authenticity. It’s played out. Deep dish has also come to further paint the Midwest as a flyover state by East Coasters. The perception is Chicagoans chomping on thick, cheesy slices are oafish. Meanwhile, cosmopolitan New Yorkers feast on lighter and more complex crusts.

But the family behind Dino’s rolls their dough without knowledge of these perceptions. Dino’s doesn’t have that trendy disdain for thicker Chicago crusts. They also serve stuffed pizza — without any judgement — even though most of its sales are for thin crusts. They’re also quick to praise other pizza makers.

“New York does make a great pizza,” said Bianca Henniges, Joey’s mother who — along with her husband Joe, sister Bruna Morrison, and Bruna’s husband Darek — took over Dino’s from their parents.

The attitude is refreshing as N.Y. and Chicago have resorted to Internet snark to bash each other’s pies. Chicagoans are fighting pizza battles on multiple fronts. The city also has its own pizza civil war. For example, ABC Chicago food personality Steve Dolinsky included an “overrated” section in his book Pizza City, USA. The book covers Chicago as the pizza capital of America. Pizzeria owners who have been listed aren’t too happy by being called “overrated.”

Dolinsky has also hopped on the tavern crust bandwagon. He named Vito & Nick’s the best pizza in Chicago in his book. Eight years ago, he listed Vito & Nick’s as the second-most overrated pizza in the city in a story he wrote for WBEZ Chicago. Dino’s isn’t listed in Dolinsky’s book.

Dino’s sauce isn’t too sweet or tart. The sausage is a standout, a zesty special blend that’s heavy with fennel from a butcher they’ve used for years. The old-school dining room remains intact yet they’ve made some changes with vegan cheese and gluten-free crusts. Dino Borrini learned much of his craft hanging out with other immigrants while working at Father & Son Pizza, which explains how tavern-style pizza wound up on the North Side. Father & Son’s origins go back to 87th Street and Stony Island. Borrini arrived in America in 1956 along with many other Italians who went on to work at Chicago pizza shops. The first Dino’s was at Armitage and Tripp in what’s now Hermosa. They moved to Norwood Park in 1968.

The Dino’s family has grown through street fests, school fundraisers, and other civic activities. Bruna Morrison’s son, Kevin B. Morrison, continues the outreach as a recently elected Cook County commissioner. The community extends down Higgins to another tavern-style pizzeria. Joe’s Pizza has been around since the late ‘60s. Between Joe’s, Dino’s, and Trio Pizza — the latter which is right across the street from Dino’s — there’s a pizza community. They even borrow ingredients from each other in a pinch.

“I wouldn’t do that with any other place, said Frankie Pollini, the third-generation pizza maker at Joe’s.

Joe’s and Dino’s are linked by old-school Chicago connections. Like Dino’s, Joe’s has a link to the South Side, starting out in suburban Evergreen Park. Family attended the same schools and churches (St. Constance Catholic Church). Both pizzerias haven’t altered their core recipes created by their Italian families. Pollini said pizza experts may be able to discern the differences in their crusts and sauces. But most customers see pizza as pizza.

Joey Henniges started bussing tables when he 14 and respects what his grandparents built. More business would be great, but he wouldn’t want to alienate loyal customer base his family’s built.

“All of a sudden you’ll get this mad rush of people and it’s not the same feeling for my neighborhood customers,” he said “They’ll see that’s cool, but now I’m waiting an hour for something that used to take 20 minutes.”