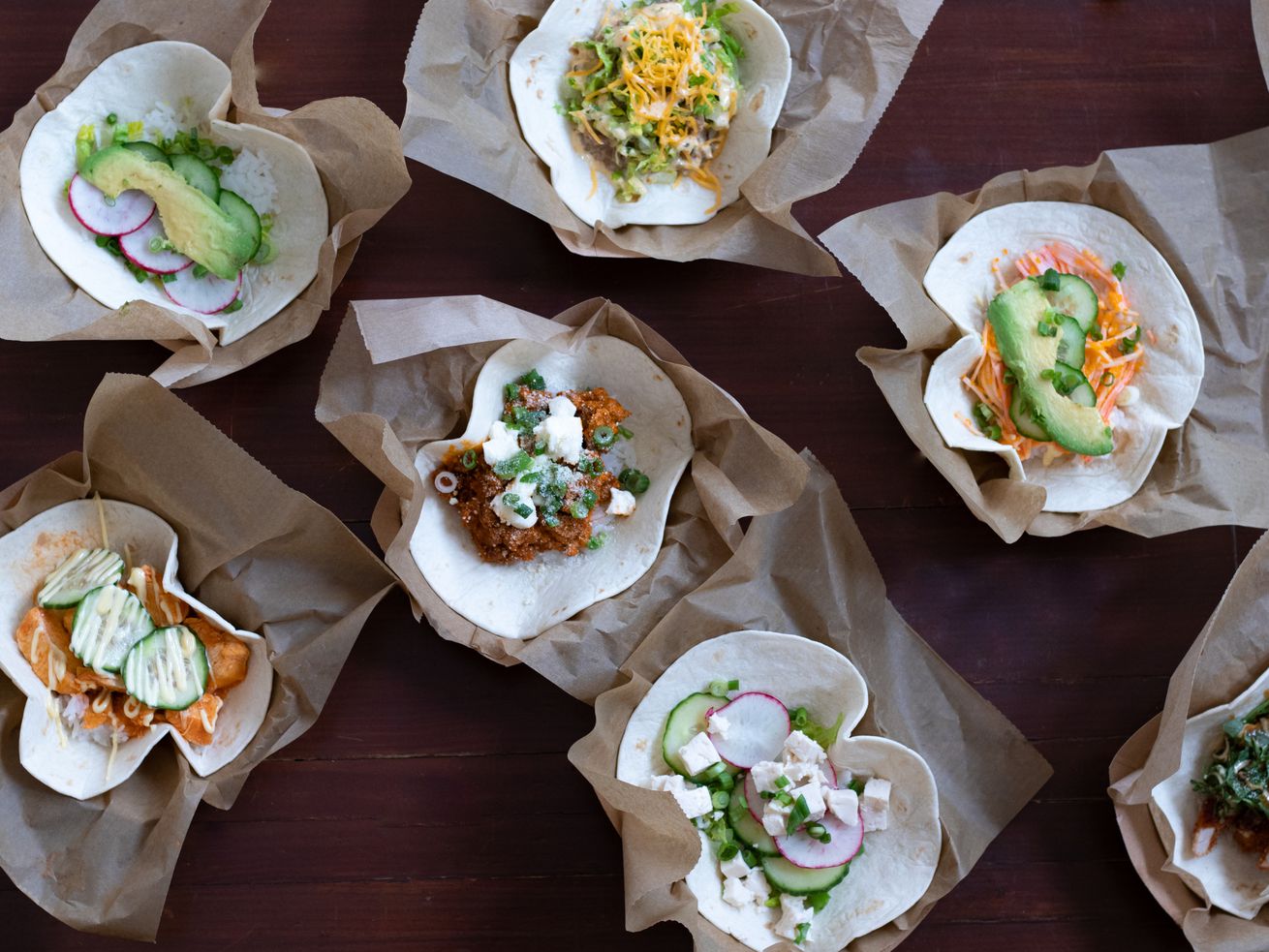 A new retail market that specializes in tacos stuffed with Japanese flavors and sells pasture-raised beef from an Indiana farm opens today in West Town. Arigato Market got its start as a pop-up inside On Tour Brewing, and chef Brett Suzuki said his food has evolved over the last two years. Suzuki’s family opened suburban restaurants (Sushi Kushi and Seasoned in Lake Forest). His father is Japanese, and all the tacos — like Japanese spicy tuna and panko pork tonkatsu — come with personal stories.

“They’re American tacos with Japanese ingredients,” Suzuki said. “Which is basically me because I’m half Japanese.”

The market’s located at 1407 W. Grand Avenue. It’s mostly a to-go operation with a six-seat counter. Suzuki has partnered with Ethan Wautelet who owns a cattle farm near South Bend, Indiana. Not all tacos have Japanese ties. For example, they’re using ground beef from the farm in tacos like the “Fully-Loaded Cheeseburger.” Suzuki is taking a composed approach having worked at Next Restaurant during its French Laundry turn. He idolizes chef Thomas Keller. Suzuki uses flour tortillas from Tortillería Atotonilco in Pilsen.

Suzuki described the shell as “only the vessel.” He feels corn tortillas overpower Japanese flavors which are lighter compared to other Asian countries. Besides working at Next, Suzuki also worked at Pump Room in Gold Coast. He also studied at the Culinary Institute of America in New York and took night classes. His work experience includes working in finance and living in Japan where he learned about meat supply working for Sumitomo.

Selling meats at the market brings Suzuki’s career full circle. They’ll have chilled and frozen cuts of beef available that are vacuum sealed to prevent fast oxidation. There’s no hormones or antibiotics and Suzuki said the cuts have a cleaner taste compared to what Chicagoans buy at their grocers.

So what are the stories behind the tacos? Suzuki went to Utica College, which was part of Syracuse University in Upstate New York. That’s not too far from the birthplace of the Buffalo wing. The hot Buffalo chicken taco comes with poached pulled chicken, hot sauce, cucumber, Japanese aioli, and Japanese rice. The poke trend may be waning, but Suzuki wants to bring Japanese-style poke back to the forefront with the spicy poke tuna taco. The heat comes from a jalapeños, which Suzuki feels makes it taste more Japanese style. Then there’s the chicken curry taco. It’s a throwback to a friend who owns two curry restaurants in Japan. Most Americans may think of South Asia when they think of curry, but Suzuki wants to challenge that notion.

For those who don’t know Japanese or haven’t been tortured by Chicago’s very own Styx, arigato means “thank you.” The market will also offer catering so offices can make taco Tuesday extra special. Check out the market today, as it opens at 11 a.m. on Tuesday. It’s cashless.