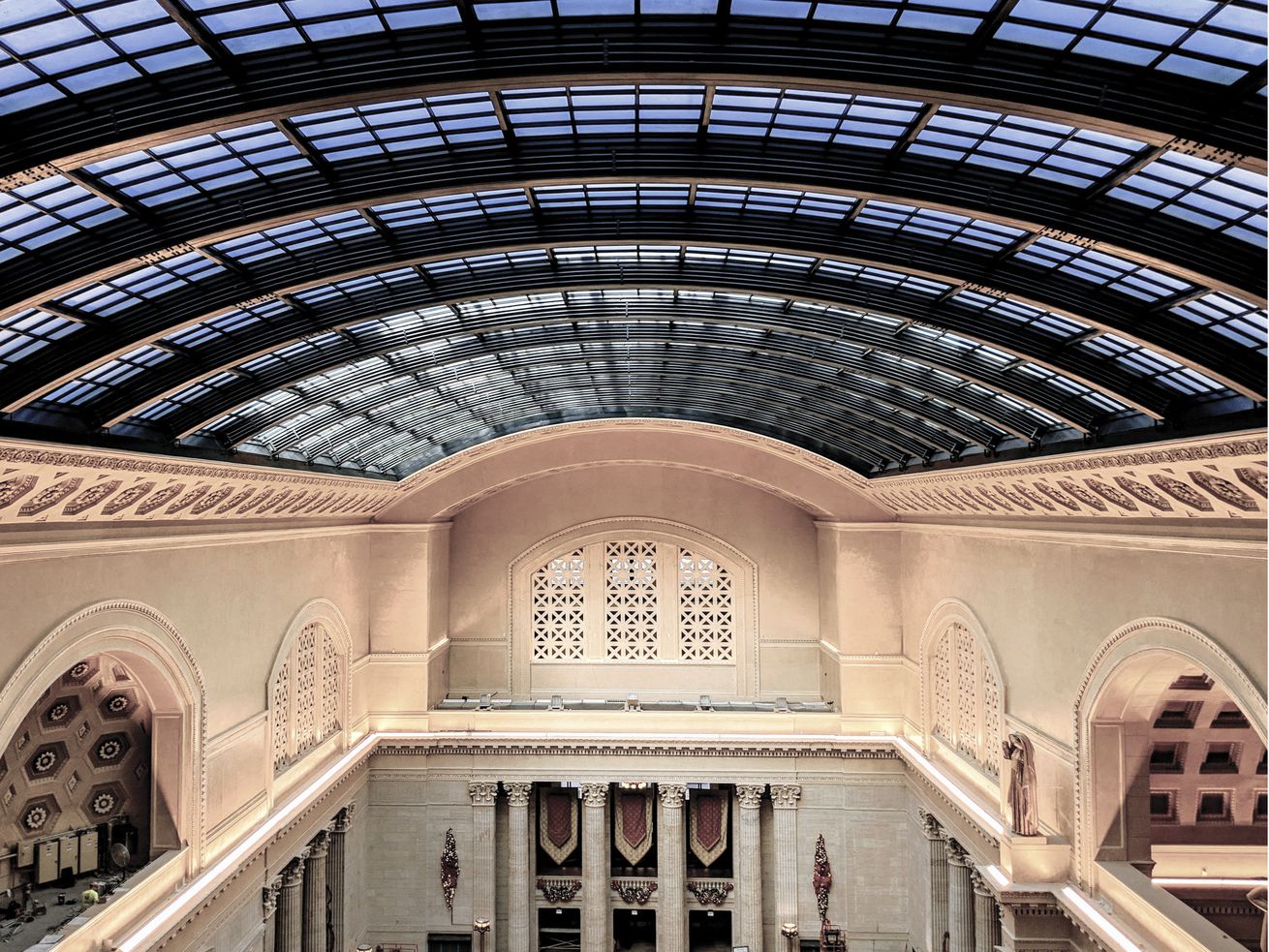 After spending 12 months obscured by construction scaffolding, the 18,000-square-foot skylight above Chicago Union Station’s historic Great Hall made a triumphant return to the public eye following a $22 million, Amtrak-funded restoration.

Although the 37 million rail passengers passing through station each year may not notice every nuance of the complicated project, visitors will certainly appreciate 50 percent more natural light and a lack of water pooling on the floor of the notoriously leaky space.

“We started the project in the fall of 2015 with the simple question: how do we keep the water out?”, architect Len Koroski of Chicago firm Goettsch Partners told Curbed Chicago.

“It evolved from doing only the skylight to structural considerations, plumbing, plaster repair, restoring ornamentation, and adding new lighting as the scope of the work was extended to every corner of the Great Hall and its breezeway. Amtrak saw a logic to doing it this way.”

“The original skylight was built of cast iron members that supported the glass panes in an oil-based sealant,” Koroski explained. “Which is great, until the sealant dries up. Frankly we believe it’s been leaking since the 1930s.”

After decades of clumsy band-aid like repairs—not to mention a complete black-out job with tar during the World War II—it’s no wonder that less sunlight was making it to the Great Hall floor. The solution? Restore the historic skylight and its 2,052 pieces of glass to their original appearance and construct a second, high-performance skylight just above to deal with Chicago’s variable climate.

To minimize disruption to travelers during the year-long project, contractor Berglund Construction utilized a suspended work deck with swing stages instead of traditional floor-mounted scaffolding. Workers took the opportunity to address water damaged plaster, repair portions of the stonework, install new cornice lighting, and restore a pair of Henry Hering-designed statues back their original golden color.

“We had to get back to the original plaster surface because the weight of so many repairs was causing problems,” said Koroski. “We looked at descriptions in old Anderson, Probst & White documents describing a ‘warm color to complement the travertine stone below’ and carefully scraped away layers of paint to rediscover original coloration to identify a modern alternative.”

The Great Hall restoration represents the latest project in an ongoing partnership between Amtrak and Goettsch Partners. The local architecture firm was responsible for Union Station’s contemporary Metropolitan Lounge, the restoration of the marble staircase famously featured in the 1987 film The Untouchables, and the dramatic transformation of the water damaged women’s lounge into a ornate event space rechristened as the Burlington Room.

“Union Station was created as a grand space and a civic gateway to Chicago,” added Koroski. “We were lucky to approach this project with the general attitude of ‘let’s do it right for the next 100 years.’ We are pleased to be working with Amtrak and assist them in their ongoing stewardship.”

Looking further to the future, Amtrak will team up with Riverside Investment & Development and Convexity Properties to transform the upper levels of the station into 400 hotel rooms. As early as next year, the joint venture plans to demolish a nearby Amtrak parking garage and begin work on a 50-story, BMO-anchored office tower—also designed by Goettsch.