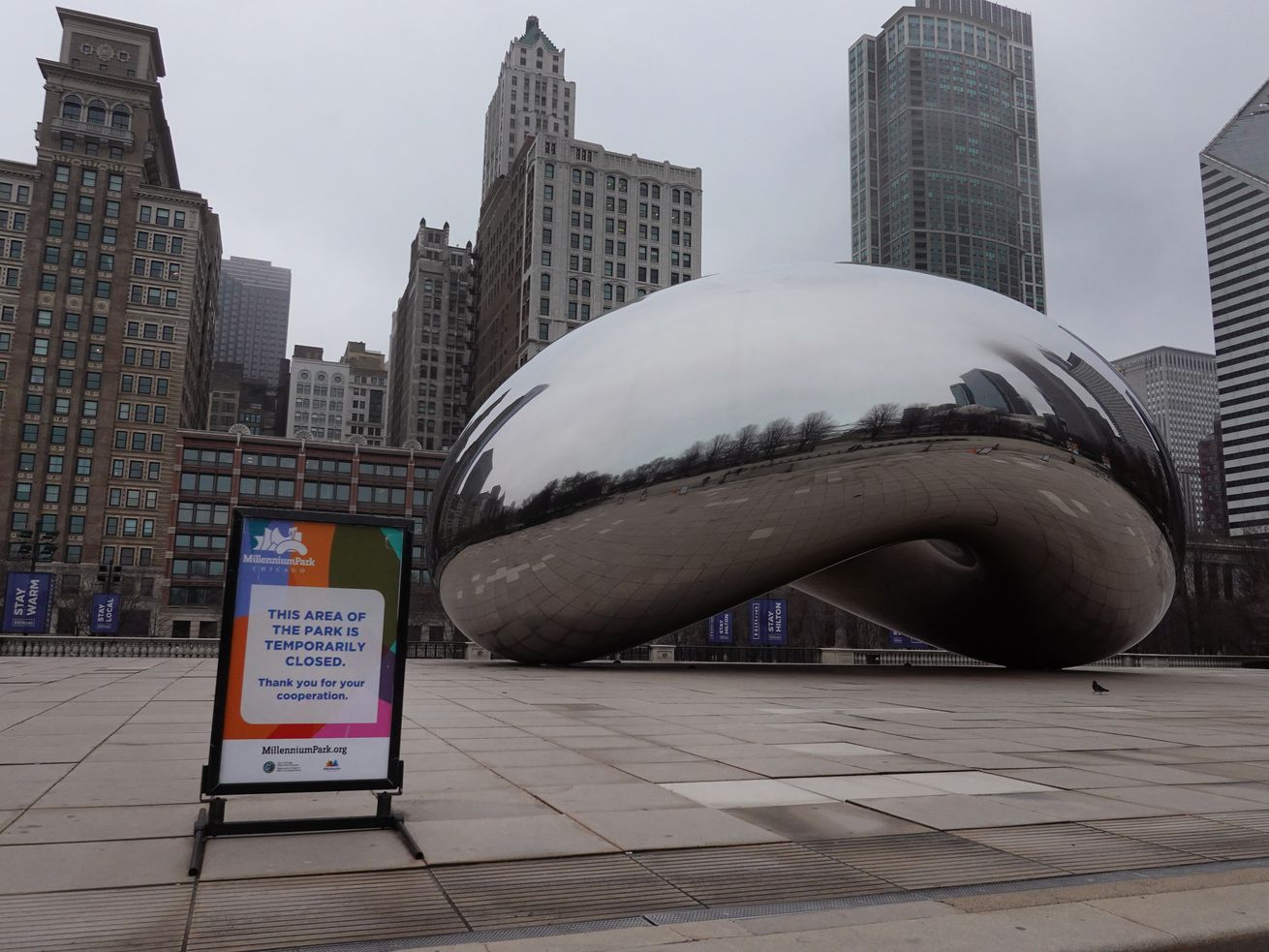 Thursday was a rainy day in Chicago, as attraction, like Cloud Gate, remained closed to the public. | Photo by Scott Olson/Getty Images

The Chicago mayor did not mention shelter in place

UPDATE: The mayor made her address and didn’t mention shelter in place.

Mayor Lori Lightfoot did not issue a shelter-in-place-order during her Thursday night COVID-19 address; she didn’t even mention it. Speculation had mounted earlier in the day that the mayor would make use of a rare evening address to declare the order which, depending on how it was implemented, would affect restaurant takeout and delivery operations. Much to the frustration of restaurants owners across the city, the impact of such as an order is unknown.

The Chicago Small Businesses Resiliency Loan Fund is for “severely impacted” small businesses, and the money would be available to small-business owners via low-interest loans and funded through a public-private partnership. Restaurants and bars presumably fall into the “severely impacted” category: Countless establishments have announced layoffs and furloughs this week as the industry deals the forced closures of dining rooms and the full shut down of bars. Lightfoot is looking for more donors, but the fund will start at more than $100 million powered by a $25 million city of Chicago grant, $50 million from the Chicago Community Catalyst Fund, and $10 million from Goldman Sachs Urban Investment Group. Other donations include $1 million from Fifth/Third Bank.

During her remarks, Lightfoot repeatedly mentioned the “unprecedented challenges” that COVID-19 presented to the city, and the forecast continues to grow darker. The state announced 138 new confirmed cases on Thursday, bringing the total number in Illinois to 422. Earlier in the day, Governor J.B. Pritzker also said COVID-19 has killed three more in Illinois, including two from the Chicago area. The address also included the announcement that Chicago Public Schools would be closed until April 20 to reduct social contact and curb spread of the virus.

Shelter in place, which would restrict Chicagoans from leaving their homes, wasn’t mentioned by Lightfoot today, but the mayor may issue an order in the future. Suburban Oak Park will institute shelter in place starting at midnight on Friday, though it does not affect carryout or delivery operations. Still, restaurant owners await clarification.

Oak Park Mayor Anan Abu-Taleb told Eater “we’re at war with an enemy we can’t see.” Abu-Taleb, like Governor Pritzker — whose family founded Hyatt hotels — has a hospitality background; his family runs the Pizza Capri mini chain, which has locations in Hyde Park and Lincoln Park. Abu-Taleb understands the fiscal pressures that restaurants face and took that into consideration when issuing the shelter in place order. He said more elected officials need to step up to free up the needed funds to help the industry. With her announcement about the new $100 million fund, Lightfoot seemingly would agree with her suburban counterpart.

When it comes to all relief efforts, Abu-Taleb worries about who will receive the money. Among those who need the most help are undocumented immigrants who may not be eligible for government benefits, he said.

“We need to appeal to the American people,” Abu-Taleb said. “If you had a good meal at a good restaurant, had good service — someone with that [undocumented] status participated in delivering that meal and service to you.” Hopefully the recipients of the Chicago Small Businesses Resiliency Loan Fund will do so; those interested can submit responses to a survey posted to the city’s website.