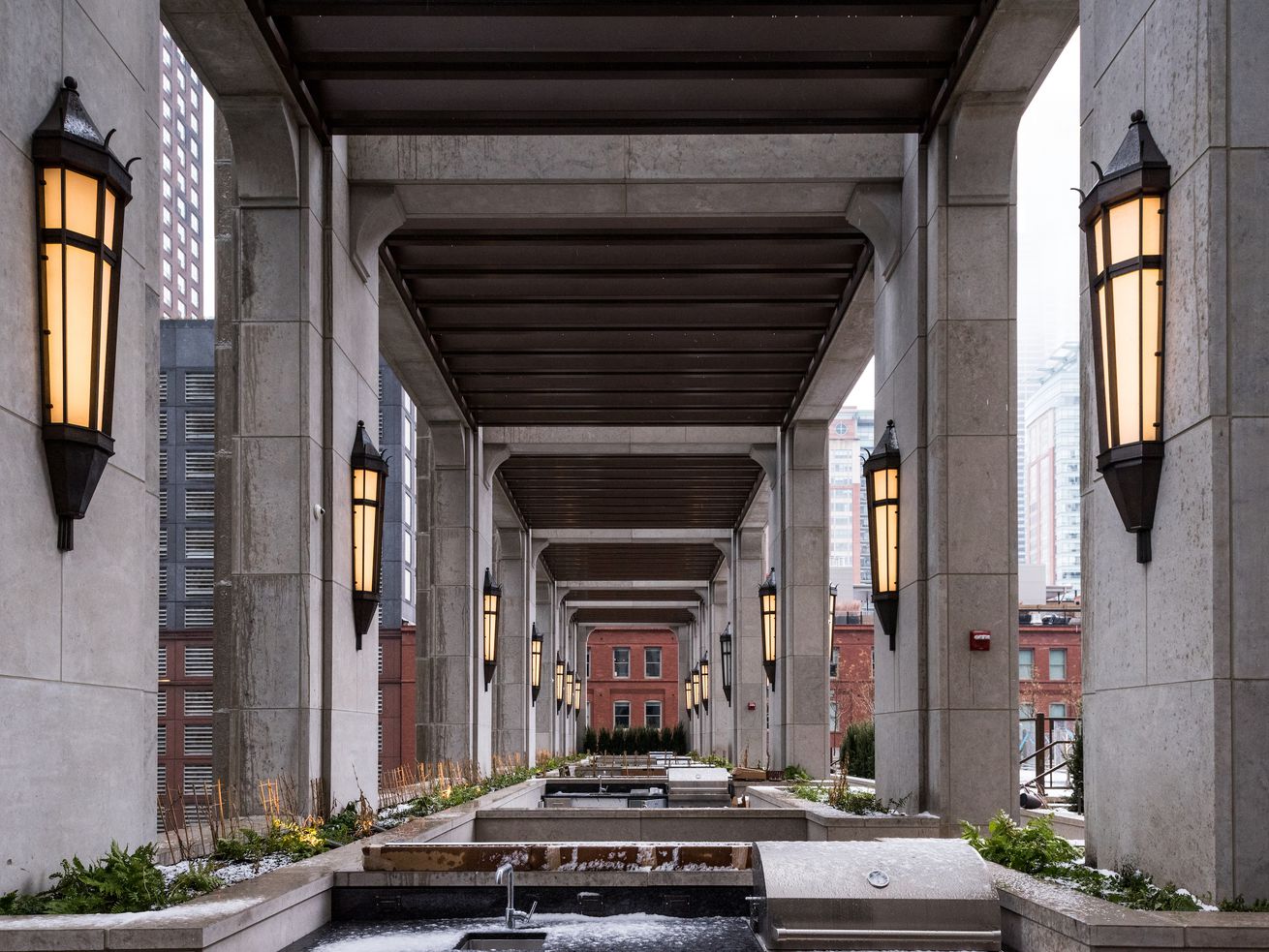 Chicago’s current building boom has delivered dozens of high-end rental buildings over the past five years, but few so far rival One Bennett Park when it comes to pushing the upper edge of the luxury envelope. Under construction since early 2016, the 70-story apartment and condo tower now stands head-and-shoulders above its Streeterville peers with an Art Deco-inspired design from New York-based Robert A. M. Stern Architects (RAMSA).

Although the building’s upper-floor condominiums—which will have their own exclusive lobby, motor court, and amenity space—won’t open until next year, Curbed Chicago stopped by the 836-foot-tall high-rise for a first look at its newly completed rental lobby, model apartments, and common areas.

Renters at One Bennett Park are separate from owners, but that doesn’t relegate them to second-class status by any means. Even the rental lobby’s porte-cochere facing North Peshtigo Court makes use of high quality materials and design elements like star-shaped columns, metal detailing, and oversized lanterns.

The inside of the apartment lobby continues the Deco-influenced conversation with its stepped ceiling, oversized windows, and hand-brushed plaster walls. Here, a relatively traditional cream-on-cream palette is elevated with splashes of color from a red lacquer folding screen designed with the functional aim to block headlights from the drop-off area. There’s also a swirl-shaped accent piece from Chicago artist Nick Cave crafted from multicolored wire and glass beads.

Unlike some residential towers where the design architect has limited involvement with the interiors, One Bennett benefits from a more holistic approach by RAMSA. “It’s really two buildings in one,” said Ann Thompson of project developer Related Midwest. “We developed two compatible identities for the spaces. The condo and apartment lobbies are aesthetically different but they received the same level of sophistication and attention to detail from Stern’s team.”

RAMSA had a hand in the design of the 279 apartments, either custom-creating or hand-selecting everything from bespoke door handles to kitchen cabinetry. The firm even consulted on the floorplans which are open and contemporary yet feel very residential with their high ceilings and cased openings between the rooms.

Large windows provide virtually the same visibility of floor-to-ceiling glass but avoid the institutional, office-like feeling of some more modern apartment buildings. The design of the openings create deliberate “frames” for One Bennett’s lake, river, and downtown views—although the scenery was somewhat obscured by snow flurries during the tour.

No new downtown rental building would be complete without ample amenities and One Bennett Park is certainly no different, offering 17,000 square feet of space to renters. The building’s fourth floor is home to a reservable party room with two kitchen areas—one more suited to entertaining, the other geared toward catered events.

The room connects to an outdoor pool deck with a line of grilling stations topped by imposing, 25-foot-tall limestone pergolas. Like the tower’s lower levels, the outdoor amenity areas are clad in real stone (the upper levels of the exterior, however, must make do with grooved precast concrete panels).

An impressive angular staircase winds down from the fourth floor to more amenities on the third level. Here, residents will find a spacious lounge, indoor pool, children’s play room, an enormous fitness center, and a dedicated “tween” room with a pool table, games, and TVs.

Given the high-quality materials and thoughtful design of the rental units, we are excited to return and check out the building’s 69 condo units as well as the development’s namesake 1.7-acre adjacent public park designed by The 606 and Maggie Daley Park architect Michael Van Valkenburgh Associates. Both are expected to open next year.