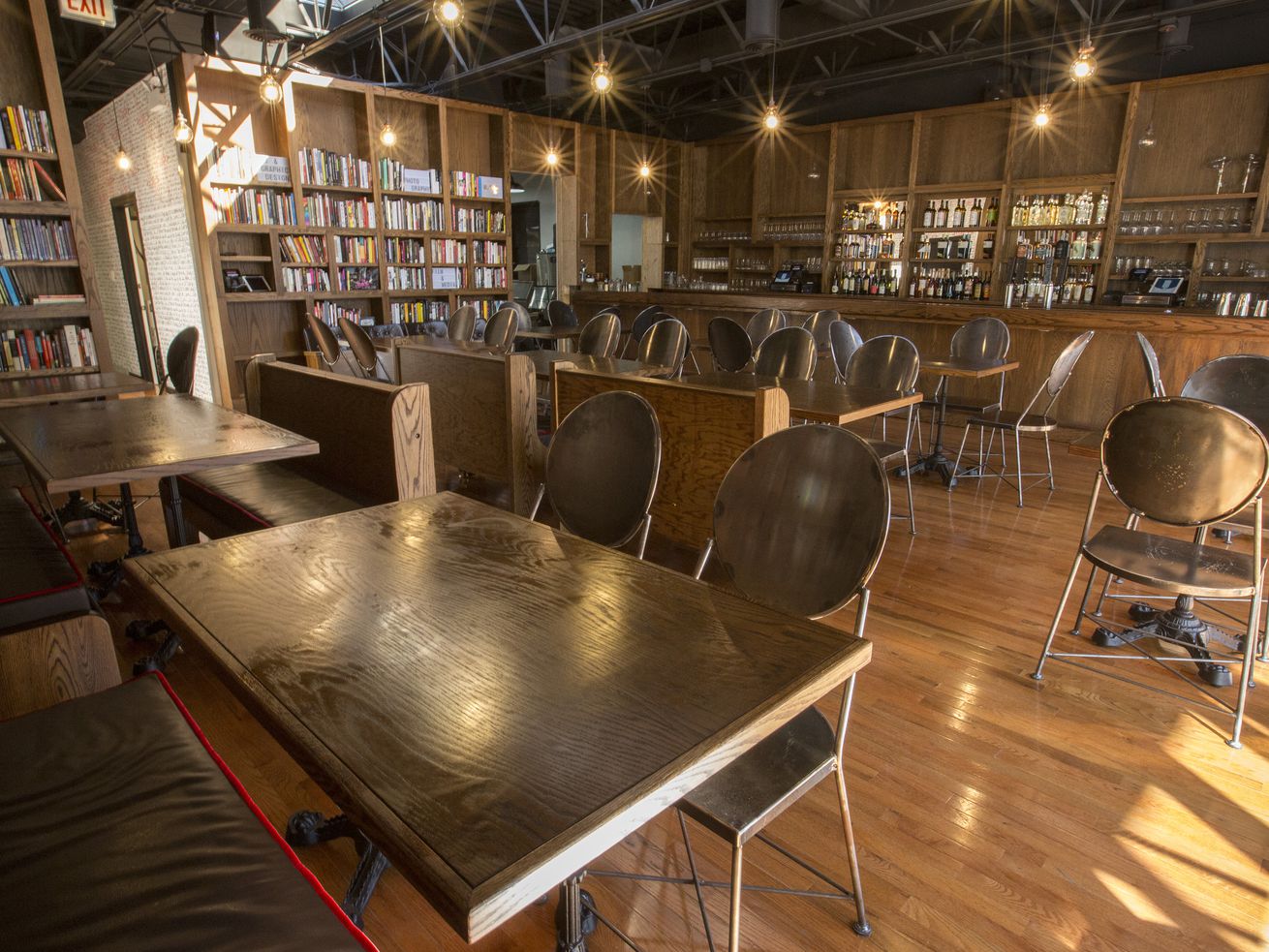 Everything at Bibliophile is hand crafted, staff says

Over the last five years, the owners of Fabiana’s Bakery know they’ve built up trust serving the residents in Hyde Park thanks to baker Fabiana Carter’s creative desserts. Armed with that confidence they’re close to unveiling Bibliophile — a full-service restaurant that’s part bookstore and part dessert/wine bar. It’s located just down the street from the bakery and features alcohol-infused desserts like a cheesecake that tastes like an old fashioned or a layered chocolate hazelnut cake that looks like a series of books stacked together.

Bibliophile was supposed to open today, but the debut’s been pushed to Wednesday at 1658 E. 53rd Street. A few changes including a chef change led to the delay.

Carter and her husband, Michael Scott Carter, don’t want their new project to come off as a gimmick. They hired a bartender who holds a library science degree from the University of Chicago. She curates the selection of books that surround the perimeter of the cafe. All the books are for sale and in a variety of genres from African-American studies, to film, to graphic novels, and children’s books. The genres are displayed on light boxes sitting on the bookshelves.

The chef switch has ownership making a few tweaks to the menu, which they describe as American comfort foods. They’re focused on getting it right because they want to scale the idea. At the same time, management wants to do right by Hyde Park, one of the most unique neighborhoods in Chicago, and one that’s fiercely loyal. Some residents still bemoan the shutter of Ribs ‘N Bibs, a restaurant that shuttered three years ago. For the Carters, that means Hyde Park doesn’t want to see itself as a commodity for restaurant owners to open second or third restaurants. They want to know that ownership is invested in the community. Fabiana’s success over the last five years should prove that.

Sommelier and service manager Derrick C. Westbrook worked at Next Restaurant in Fulton Market and with Iliana Regan at Elizabeth in Lincoln Square. Bibliophile isn’t fine dining and he’s eager to educate new customers and turn them into wine drinkers. It’ll even have wines and foods to pair with specific books.

Of course, Fabiana Carter has plenty of baking experience, but bar manager Rachel Smith (Gather/Warbler) is there for recommendations on booze. While the spotlight falls on the desserts, the space has a bit of a wine bar feel. Westbrook is determined to showcase wine selections that go beyond the classics. Smith has also named cocktails after books, like Charles Dickens’s “Great Expectations” which is butter-washed whisky, earl grey Demerara, black walnut bitters, and orange peel. She’s also mixing up alcohol-free mocktails named after children’s books like Chicka Chicka Boom Boom.

The space is a former doctor’s office and there’s a skylight in the center. Michael Scott Carter said when it snows during the winter the effects is magical. They’re confident in giving Chicago something the city’s never seen.

Look for more on the food and drink next week, but for now take a stroll through the space below. Bibliophile should open on Wednesday.