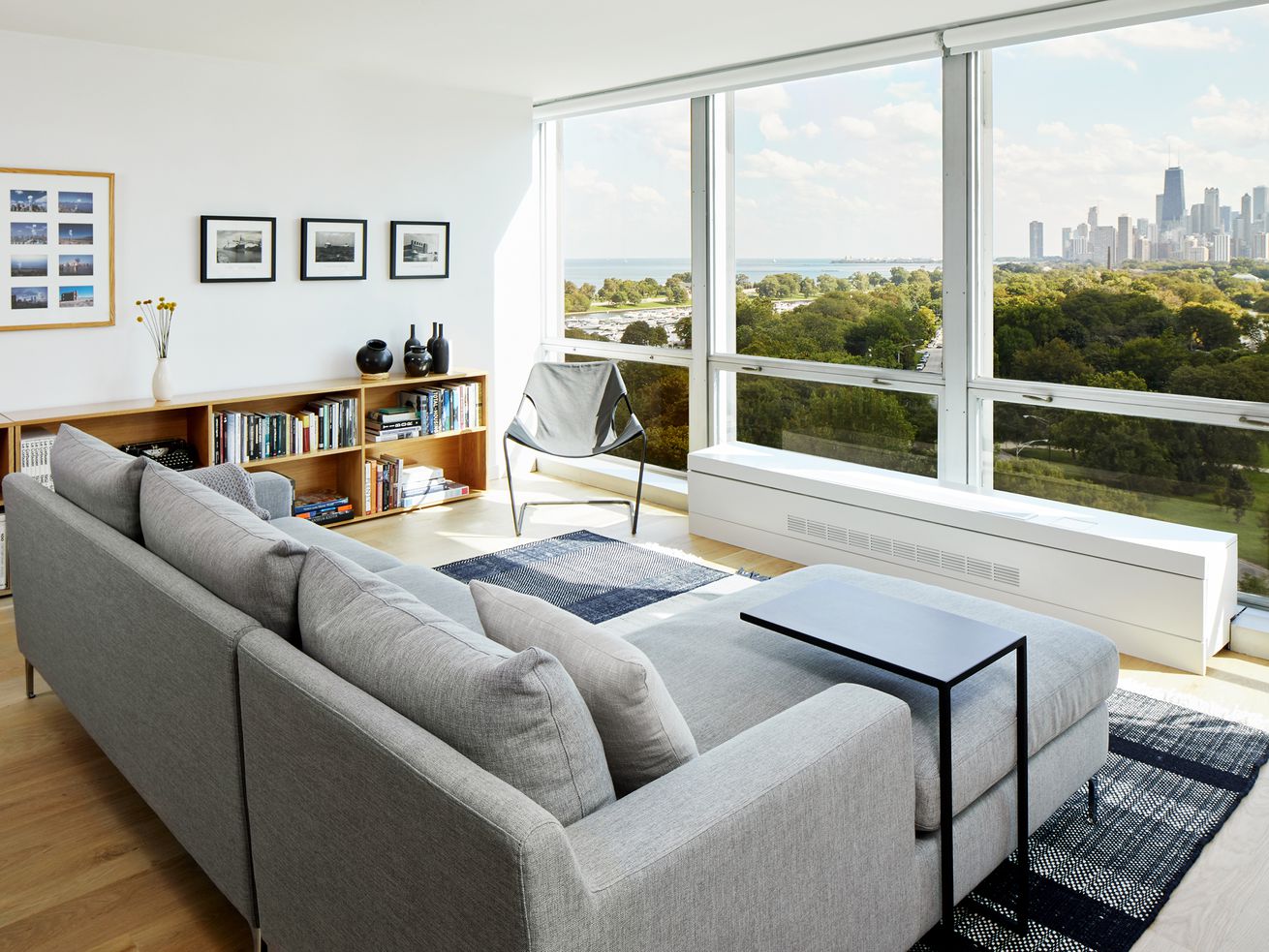 With a view of the city—and Lake Michigan

When Eric Rothfeder, the architect and designer behind firm ERA, moved to Chicago from the East Coast in 2016 to serve as a visiting artist at the School of the Art Institute of Chicago, the possibility of dwelling in a Mies van der Rohe-designed building wasn’t not on his mind.

After all, Mies van der Rohe is in many ways synonymous with Chicago—his distinct, clean-lined architectural designs dot the city, with several buildings clustered in northern neighborhoods like Lakeview and River North, around Bronzeville’s Illinois Institute of Technology, and near or on the University of Chicago’s campus in Hyde Park.

Rothfeder and his wife, who are both originally from the Midwest, were looking for a place to put down roots after a decade in New York. Though his wife was more interested in a low-to-the-ground abode, something akin to a Brooklyn brownstone, Rothfeder dreamt of taking up residence in the Mies-designed Commonwealth Promenade Apartments in Chicago’s Lakeview neighborhood.

Mies built the Commonwealth, which comprises two mid-rise apartment towers finished in 1956, was built in collaboration with Chicago real estate developer Herbert Greenwald (the pair also worked on a number of other projects, like 860-880 Lake Shore Drive, which influenced the Commonwealth).

The couple went to see the Commonwealth on a whim, and while Rothfeder downplayed his own interest, his wife surprised him. She thought it was great. While the unit, on the 13th floor, was a rental at the time, that didn’t deter them from taking it. With a great layout and unbeatable view of Lake Michigan, they started renting. And, serendipitously, it wasn’t long until their apartment came on the market. “We loved living by the lake and we loved the building,” Rothfeder says.

The apartment had been a rental for 30 years, so its interiors had extensive wear and tear; it sorely needed a refresh. Rothfeder decided to serve as both architect and general contractor. He bought all the materials and hired all the subcontractors directly, to both save money and be in full control of the process.

“It was also a really great learning experience,” Rothfeder adds. “There’s this extra little bit [that the general contractor handles] that you never see as an architect. You don’t know how the sausage gets made.”

Rothfeder’s renovation and interior design pay homage to Mies’s ethos, and he says that he gravitates toward the “slightly understated minimalist approach, with a few strong material accents.” White oak takes many forms throughout the space, from flooring and doors to furniture, lighting fixtures, and shelving. But none of the grain quite matches, something about which Rothfeder was, ultimately, happy.

“I really love that it has a slight variations in character,” he explains.” “It just expresses the natural beauty of the wood even more than if you tried to make everything exactly the same.”

Aluminum, characteristic of Mies’s era, is also present, most on display in the window system, as is an airy, ethereal color palette in each of the apartment’s rooms. Rothfeder’s priority, he says, was to avoid distracting from the view: “[The unit] has this amazing view of the skyline, and that’s really the main feature,” he says. “And so it seemed to me that everything takes a back seat to [the view] because the windows are the fourth wall of the apartment.”

The apartment, which was originally a three-bedroom, had been converted into a two-bedroom at one point during its life, and Rothfeder wanted to restore it to its original configuration, with a few adjustments. “To some degree we were almost [returning] it back to the way it was, but at the same time, there are ways in which the original layout doesn’t make sense with how people live nowadays,” he says. With careful planning, they opened up the closed-off galley kitchen and reconfigured tight hallways.

“We rebuilt a lot of walls to fiddle with the proportions to get it to feel just right,” Rothfeder says, adding that they still wanted the new layout to feel as though “it was always meant to be that way.” However, Rothfeder left the original “orange peel”-textured ceilings when most people have them scraped flat or drop them—he felt they lended character to the space. And, to create more separation between the cluster of west-facing bedrooms and the living and kitchen space, Rothfeder installed a large, sliding barn door made of white oak.

“That was a way to separate the living portion of the apartment so that, if we had people over, or we were watching TV, that there would be some acoustic separation from where the kids were and where we were,” Rothfeder explains.

Rothfeder and his wife wanted to be realistic about how the kitchen, dining, and living spaces would be used with small children in their home. Mostly, this was about the fact that they spend a majority of their time at home with the kids, and balancing that reality with their style.

“We wanted it to work both ways,” he says. “That was something we thought a lot about: that we had places for things, [that the spaces] were durable and practical, but still defined by a vision of how we wanted it to look.” In other words, the couple wanted “a space that we were happy to spend our time in on Sunday mornings,” says Rothfeder.

In the kitchen, everything has its place thanks to built-in cabinets with pantry nooks and storage to seal off unwanted clutter. Similarly, Rothfeder custom designed storage for under the couple’s bed to supplement the master bedroom’s closet. The closet features a sliding door similar to the one in the hallway.

Creating balance between a new interior that meets the needs of a modern family and the architectural significance of the building and space was important to Rothfeder.

“[The home] was designed in a very different way for families to cook and eat together, and we needed to update that because [of] how we live, how we enjoy our space. But how do you do that while maintaining, the proportion, the beauty, and the simplicity of what was originally there? You can either try to make everything look brand-new or you can kind of accept it as an artifact.”

The ceilings and window system lend identity to the home; they’re original details that Rothfeder wanted to harmonize with the renovation. And, of course, there’s the view. “Everything takes a back seat to that, the view and the beautiful museum curtain wall,” says Rothfeder, referring to the floor-to-ceiling glass windows in the space. “How do you even compete with that?” Well, you don’t.