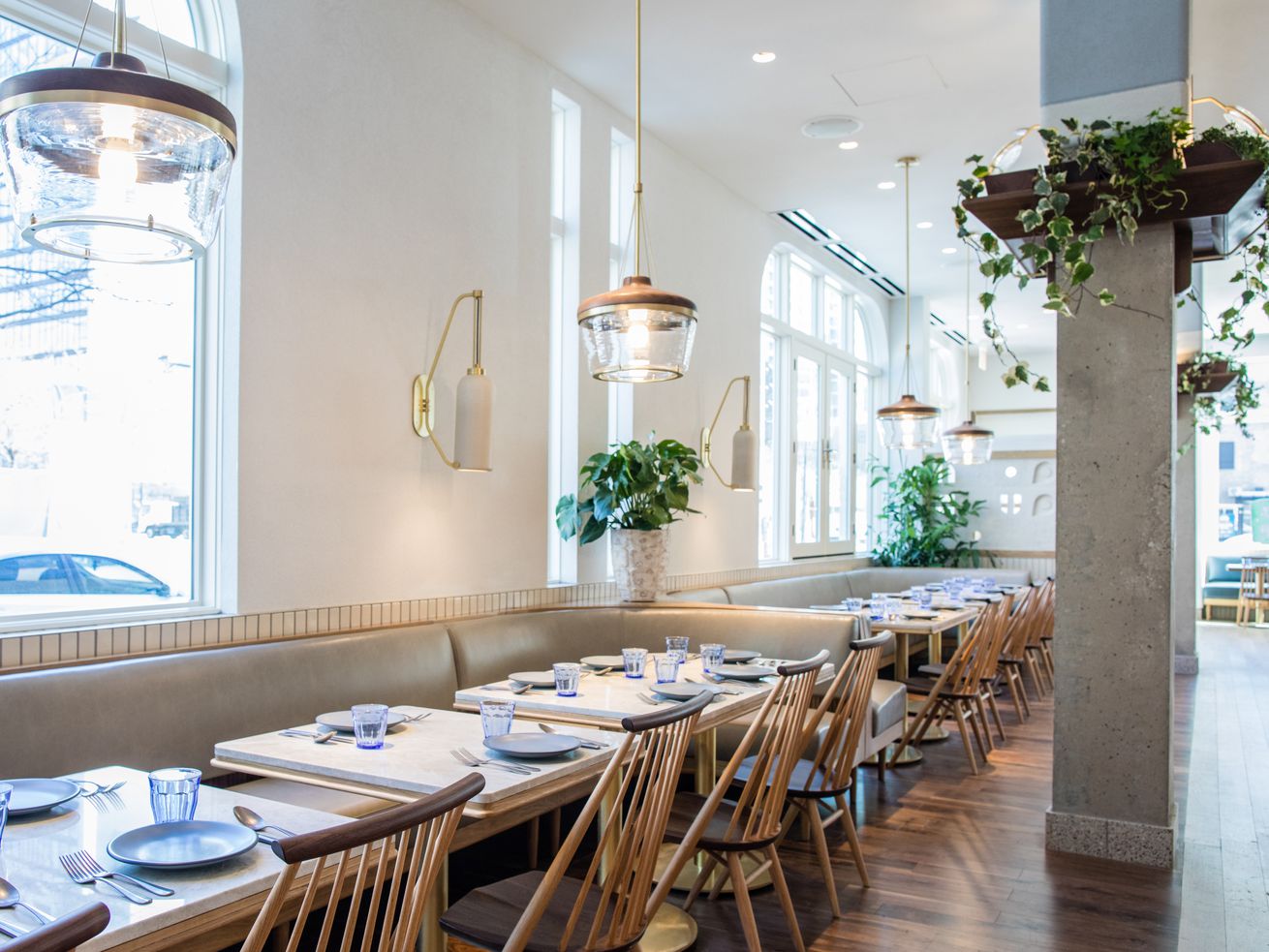 Eater Chicago’s 2018 Restaurant of the Year enchanted the city with a new genre of lighter, market-driven cuisine

Pacific Standard Time’s crispy red snapper — an entree dressed with a French-style butter sauce that chef Erling Wu-Bower brightens with Japanese shiro dashi and South American merkén chile — represents the easygoing, sun-drenched California-inspired restaurant’s global reach. Typically, “you have to stick to this direct highway of rules,” asserts Wu-Bower, referencing the culinary parameters a chef follows when cooking at a restaurant with a defined genre. So, instead, he’s driving without rules.

“We just wanted to cook what we wanted to eat,” explains the chef, summing up both his and front-of-the-house partner Josh Tilden’s early menu thoughts. That, bound with a shared affinity for “California cuisine” — a genre of cookery known for its fresh, seasonal ingredients and cross-cultural fusion — set the stage for PST.

After working together for four years at Gold Coast’s Nico Osteria — the seasonal Italian eatery from pioneering and wildly successful local restaurant development group One Off Hospitality — the duo (who, together, operate as Underscore Hospitality) teamed up with their partners, Donnie Madia Gianfrancisco, Terry Alexander, and chef Paul Kahan, to test a new style of dining in Chicago. They dreamed up a welcoming space with midcentury design nods, and a menu hinged on the lighter, vegetable-forward style of dining common in California.

As it turns out, eating greens — along with wood-fired pita, fermented chile-laced strip steak, and lamb chorizo — has proved to be just what Chicago craves. Following its debut last spring, PST nabbed Chicago’s 2018 Eater Award for Restaurant of the Year, and it also landed on Eater National’s Best New Restaurants list that year. It earned three stars from both the Chicago Tribune and Chicago magazine, and, so far this year, PST has snagged the Jean Banchet award for best restaurant design, along with a Michelin Bib Gourmand. Not bad for a nine-month-old restaurant.

“It doesn’t surprise me at all that [Erling] is emerging as one of Chicago’s top chefs,” confesses longtime family friend and iconic Windy City chef Rick Bayless. “I’ve had the fortune to cook, travel, and eat with Erling since he was a kid. … From those early years I could see that he had a chef’s nascent curiosity and drive to master techniques.”

Although praise has poured in for Wu-Bower’s globally flavored fare, interestingly, PST didn’t begin as an entirely food-driven concept. A major motivation for the restaurant, explains the chef, was design—to build a space that contrasted Chicago’s ubiquitous dark spaces; one that was filled with light, and felt like a home. For anyone who has followed One Off’s trajectory, the value of aesthetics shouldn’t come as a surprise. The group proved early on, with its very first restaurant, Blackbird, the importance of a well-executed and timeless look.

But for PST, the team wanted a transportive space. A dining room that could zap patrons to sunny California on a frigid Chicago day. “One of the first places we looked for inspiration was the work of great California architect Craig Ellwood,” says Madia Gianfrancisco. “California could be considered the birthplace of modern cuisine.” The team hired New York-based Parts and Labor Design to conceive of an aesthetic that played with fire and light; hence PST’s central wood-fueled hearths and soaring windows, which set the space ablaze with sun.

Claiming the 8,000-square-foot plot that formerly lived as Tavernita, Parts and Labor divided the space into a main dining room, plus a substantial private dining room, decked out in a naturalistic palette of white oak and walnut woods, juxtaposed against luxe, white Carrera marble countertops and brass fixtures. Pops of green from sporadic foliage reinforce the sense of earthiness and freshness. A deep, 20-seat bar designed with open ends on each side for easier service claims prime real estate toward the center of the room, while PST’s unobstructed kitchen and dual wood-fired ovens sit behind a dining counter with honeycomb-shaped cut-outs designed to make counter-style dining more comfortable for groups of three or four.

Breeze blocks “played a major role in midcentury California architecture,” explains Madia Gianfrancisco, adding that Elwood used them in many of his structures. And at PST, these cinderblocks with cut-out patterns that, when stacked, form graphic patterns appear throughout the space, adding to restaurant’s subtly retro feel.

Beyond PST’s aesthetic, California is alive and well via Wu-Bower’s approachable menu. “Vegetables play more than a leading role at PST,” states the chef, saying that today, more Americans are health conscious and interested in food that’s both good for you and delicious.

“We … place great emphasis on being a restaurant with food for everyone,” says Madia Gianfrancisco, explaining that the kitchen is “adaptable to vegetarian, gluten-free, and, in some dishes, vegan diets.” But, he says, “if you just want a great pizza and a glass of wine, we can also provide that.”

Wu-Bower grew up eating a blend of American-Asian cuisine thanks to his mother, a Chinese immigrant, and he became more familiar with the state’s beautiful produce when they relocated there during his teens. Because of California’s amiable climate and generally warmer weather, the state is conducive to growing excellent produce year-round. And that, compounded with the Californian’s interest in eco-friendly practices, like offsetting one’s carbon footprint by supporting local farmers—along with the melting pot of cultures which inhabit the state—has led countless chefs to build globally inspired menus from hyper-seasonal and locally sourced ingredients.

Wu-Bower applies those principles to his Midwestern-rooted restaurant, infusing it with the unbound style of cooking he grew up eating. He’s procuring as much top-level produce from local Chicago farms as the weather permits, and when the wintertime chill kicks in, he looks to other parts of the country for product, sourcing from California when possible.

The point is that PST is a “California-style” restaurant in concept, embracing the cooking style’s principles with respect for its Chicago locale. At PST, vegetables claim just over one third of the menu, and live alongside fish sauce-spiked chicken wings, miso-glazed pork collar, and elegant, inspired desserts by pastry chef Natalie Saben. Drinks, too, fit the theme: lighter, seasonal cocktails deigned by head bartender Scott Stroemer, and a wine list dominated by American juice.

One Off Hospitality’s first-ever partnership with two individuals previously employed by the company has paid off, and PST serves as proof: It’s an easy-going, cheery, and comfortable space cemented with uncomplicated cooking that celebrates both the time of year and many corners of the globe. It’s the modern-day California bistro filtered through a Midwestern lens.

“PST is an exciting new chapter for One Off,” says Alexander, adding that hopefully, more collaborations of a similar nature will follow. In under a year, PST has already made its mark on the city, challenging everyone to lighten up.