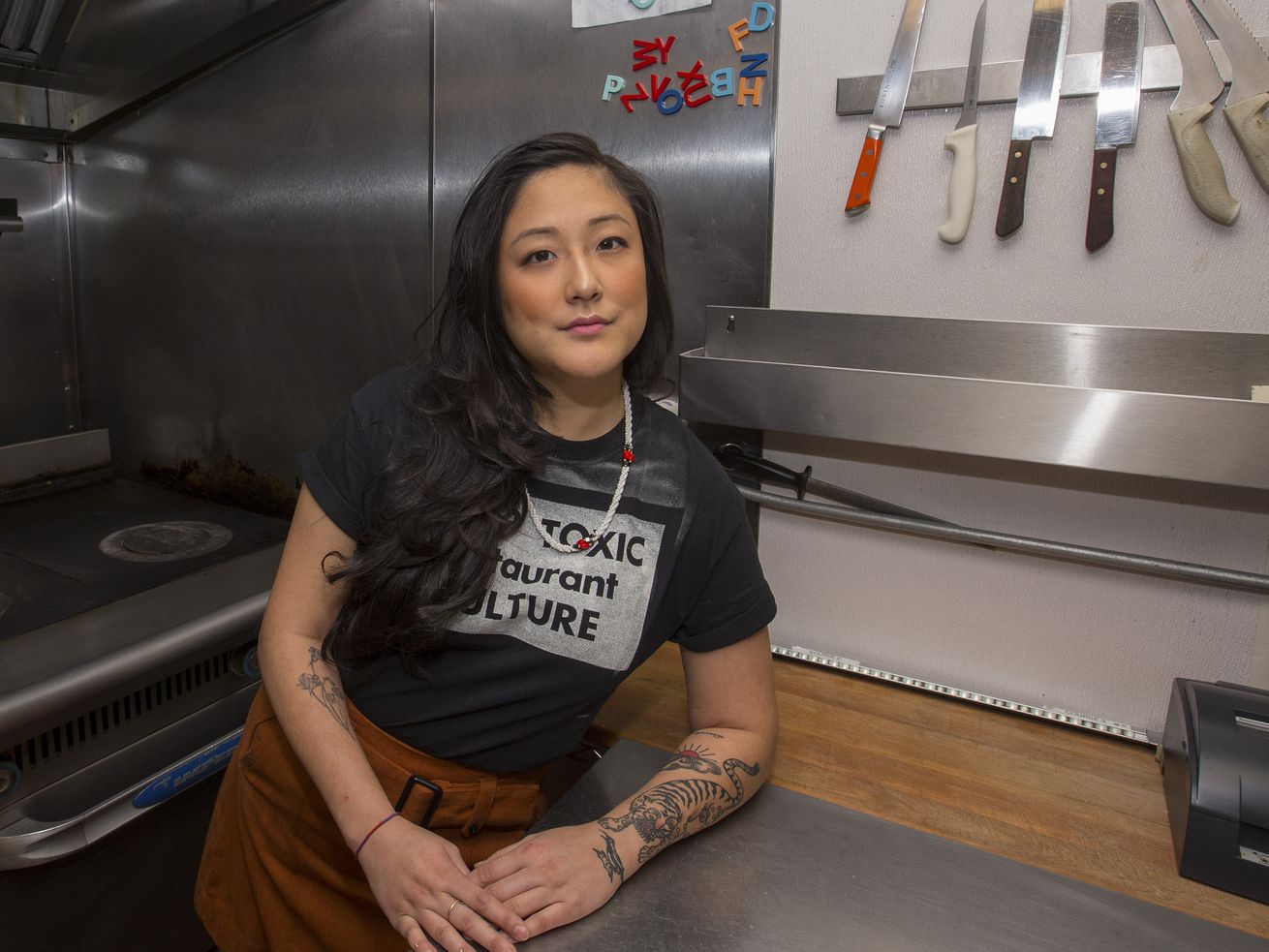 Jennifer Kim sits comfortably inside her Chicago restaurant wearing a T-shirt with a customized message: “STOP TOXIC restaurant culture.” This isn’t a cliche for Kim, Eater Chicago’s 2018 chef of the year. She’s the driving force behind Passerotto, a restaurant that presents Korean fare in a way the city’s never seen. But Kim wants to go beyond cooking. She’s committed to bolstering the industry’s push toward eliminating misogyny and racism, while curbing abusive chefs.

She’s begun holding workshops, hoping to build a stronger support network for women and the LGBTQ community, including a small business seminar held on Monday that taught people how to write a business plan.

“Often, we treat the food — the product — we treat it with more respect than the people behind it,” Kim said.

Passerotto opened in May 2018, and the menu included mama Ji Young Kim’s kimchi, rice cakes, and cured fish. Kim carefully pairs riffs on her home style food with European wines. This is unusual because beer and soju are more common food pairings in Korea. Kim’s menu reflects the classic child of an immigrant balancing act, wanting to honor their parents’s culture while endearing themselves to tastes from their own native land.

“I think a lot of Korean Americans do respond to [Passerotto] because they themselves may have dual identities or don’t feel like they belong in one community or the other,” Kim said. “To see Korean food also evolving and changing as Korean Americans evolve and change does bring me a sense of comfort.”

Kim grew up in suburban Schaumburg with her parents. She still enjoys catching up with her brother, David, at Yu’s Mandarin, the massive Chinese restaurant in her hometown. The northwest suburbs are a hub for Asian cuisine because much of Chicago’s Japanese, Korean, and Chinese populations live in places like Arlington Heights, Hoffman Estates, and Rolling Meadows.

As a child, Kim’s parent took her to Chicago’s Albany Park neighborhood, which was a major hub for the city’s Korean community. Kim would eventually enroll in pharmacy school at University of Illinois at Chicago (UIC), but left without graduating. Hoping to ignite a spark, her dad, Myung Seok Kim, began sending her self-help videotapes. Topics included being a real estate agent and one on the culinary arts which Kim initially dismissed. Then a friend from UIC introduced her to the 1984 book On Food and Cooking by Harold McGee. Kim was hooked and started fully exploring her interest in the science of cooking.

Kim again made a statement through fashion in January during the 19th annual Jean Banchet Awards, which recognize local culinary excellence. She wore a spray-painted suit jacket bearing the message “42g of BS,” a reference to the Michelin-starred restaurant 42 Grams which closed after its chef/co-owner Jake Bicklehaupt struck his partner and ex-wife with a bottle. He pled guilty to battery. The closure happened in June 2017, but news of the reason behind the shutter didn’t break until April 2018.

Passerotto was nominated for Best New Restaurant at the Banchets and Kim knew she had a platform. She intended to remind attendees of the circumstances surrounding 42 Grams’s shutter. At the Banchets, several women came up to Kim and complimented her on the message, which was meant to give the crowd more to think about than self-congratulations. Four years ago, Bickelhaupt won the 2015 Banchet for Rising Chef of the Year. He now has plans for a new restaurant in Bucktown. Few Chicago-area chefs have publicly said anything about the circumstances surrounding 42 Grams’s closure besides a few token tweets. Many industry pros, including Kim, told Eater Chicago they felt he was getting a free pass and Kim wanted to go public and break up this silence.

“They were afraid to take a stand,” said Kim’s friend and former colleague Lorraine Nguyen. “We know there are other incidents that happened that weren’t written about; these aren’t isolated incidents.”

Nguyen and Kim met and quickly clicked years ago while Nguyen was a sauté cook and Kim was an intern at Blackbird in the West Loop. Today, Nguyen notes that Kim has developed a reputation for being unapologetic — an attitude that extends to her menu as well. Nguyuen savors the memory of a special dish last summer at Passerotto. Kim tossed daylily bulbs with gnocchi and served them with fermented soybean glaze and chanterelles. It was a perfect mixture of Kim’s Korean heritage with Western culinary skills, Nguyen said.

“I don’t normally work with women who are Asian on the savory side [of the kitchen],” Nguyen said. “Immediately when I met her, her aura felt cool, we were able to joke around. I knew I needed to keep her around.”

Nguyen is Vietnamese-American, and the two first generation Americans quickly developed a support system, leaning on each other. Elske’s David Posey was in charge of the kitchen at Blackbird while Kim and Nguyen worked there and he remembers her eagerness to learn.

“She was the one intern where if she didn’t know something she would go home and look it up and come in over the next few days knowing whatever we needed to be talking about,” Posey said.

Beyond piecing together her cultural identity on a plate, Posey also lauded Kim for combining her professional experiences into Passerotto’s menu in a “very mature way.”

Although Kim absorbed information like a sponge and sought constructive criticism from her mentors, not everyone served as a role model. For example, Ngyuen said there’s a sect of men in the food industry who love to belittle women until they’re in tears. She said while men aren’t absolved from criticism, at times women face more aggressive, more ferocious words surrounding the same issues. On these occasions, she says it’s been so important to have Kim as a friend to put the criticism in perspective. Kim and Nguyen have discussed how this style of verbal abuse is a form of gaslighting, to undermine female credibility.

“You’re weak, you’re not a real cook — you’re a foodie that wants to be a cook,” Nguyen said of bully tactics she’s heard in the kitchen.

In the past, words like these drove Nguyen from jobs that she really enjoyed.

“You have to not only laugh at the brutish jokes but you have to be able to participate in them in order to be seen as an equal with the people who are around you,” Kim said. “Unless someone realizes that’s extremely problematic and toxic and stands up…it’s just going to keep on going.”

Nguyen says she’s also witnessed Kim’s resilience. She recalled a conversation over dinner when Kim realized her Lakeview smoked fish deli, Snaggletooth, needed to close. While Kim doesn’t say much about that time, Nguyen described Kim as devastated. Yet Nguyen said her friend rebounded with the idea for Passerotto.

When asked if she has plans to open more restaurants, Kim said her hands are full with one. She wants to go beyond mere dining experiences to help reform the industry for the greater good. Using the success of Passerotto to enhance her platform, she’s doing everything she can to ensure marginalized restaurant workers don’t have to go through what she did.