Here’s what the Micheal Reese redevelopment could look like 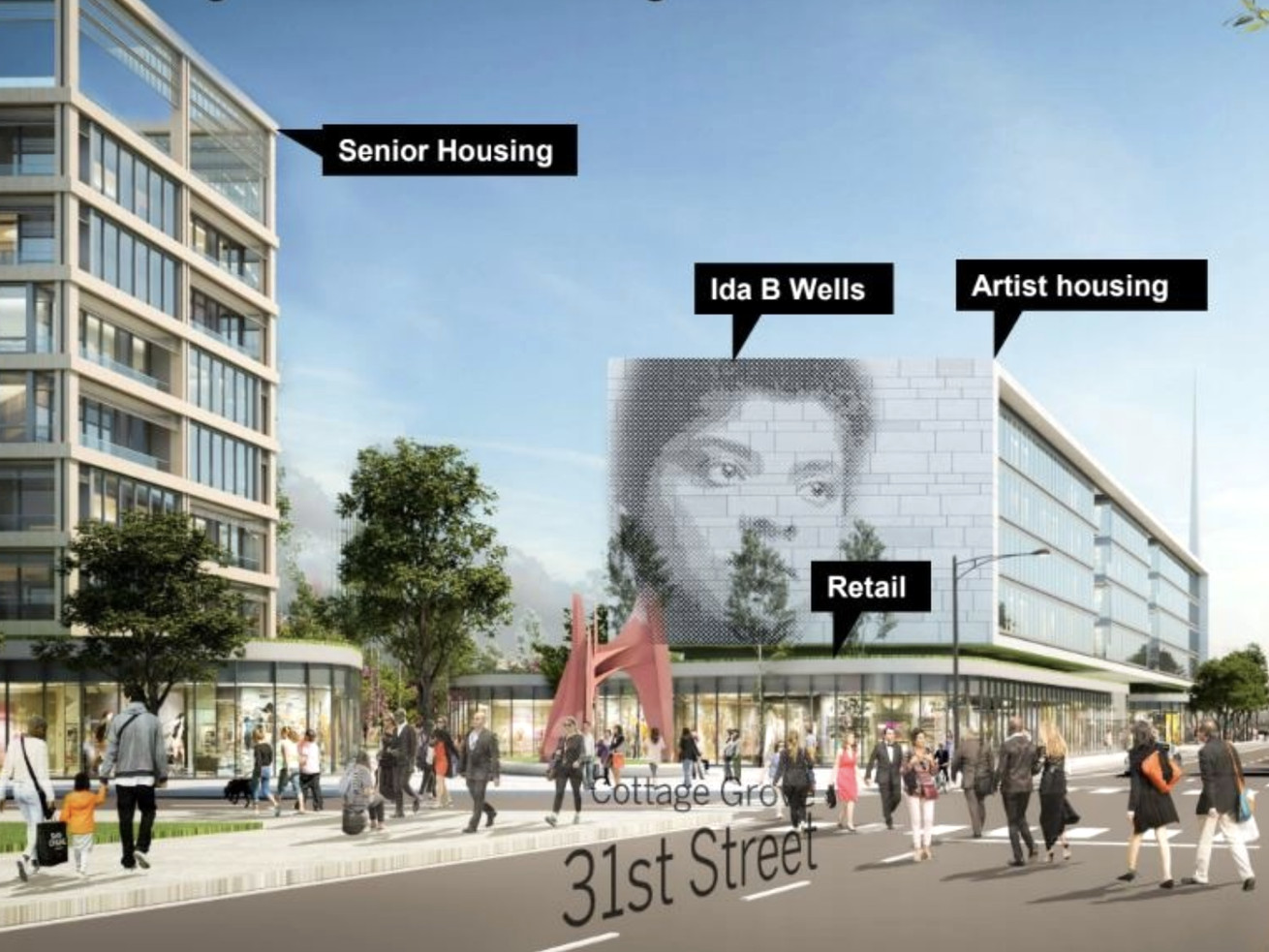 Megadevelopments like Lincoln Yards and The 78 might have dominated the headlines in recent months, but a plan for the multiphase redevelopment of Bronzeville’s sprawling Michael Reese hospital site is also coming into focus.

It’s been a long time coming for the Near South Side parcel which saw its namesake hospital was demolished more than a decade ago. Despite its proximity to McCormick Place, Interstate 55, and 31st Street beach, the 100-acre site has remained vacant and fenced off.

In a recent interview with the Chicago Sun-Times, departing Chicago Planning and Development Commissioner David Reifman expressed regret about the lack of progress at the Michael Reese site and alluded to a long-term plan to construct a new soccer stadium for the Chicago Fire.

The office of 4th Ward Alderman Sophia King says it hasn’t discussed any stadiums just yet, but it did post conceptual plans showing what the first phase of the Reese redevelopment could look like.

The latest proposal for Michael Reese

At a town hall meeting hosted by Alderman King in April, a team led by Chicago-based Farpoint Development shared new details and updated renderings of the Micheal Reese redevelopment proposal with the community.

Clustered around the corner of 31st Street and Cottage Grove Avenue, the phase one vision includes affordable housing for seniors and artists, a life sciences facility, a data center, retail space, public plazas, performance venues, art installations, and the adaptive reuse of the Singer Pavilion—the most prominent surviving structure from the demolished hospital complex.

“This was an early attempt to put together a plan based on concerns and feedback collected from neighbors and the alderman’s community advisory committee,” Alderman King’s chief of staff Prentice Butler told Curbed. “It’s important to Alderman King that community voices are being heard and represented at the beginning of the process, not the middle.”

Among the recommendations were the desire for affordable housing and art that reflects the cultural legacy of the neighborhood (which explains the Ida B. Wells mural). Future phases would extend to vacant lots to the north, west, and east and call for an improved Metra stop and restored street grid.

Butler stressed that April’s town hall presentation represents an early vision and that the development team must still take control of the site and navigate the city’s approval process before any work can begin. Farpoint Development could not be reached for comment.

There’s a thoughtful community-driven approach and practical scale, which makes this plan far different from some of the more grandiose schemes that have been proposed for the city-owned site since Michael Reese Hospital was demolished a decade ago.

Here’s what else was planned for Michael Reese

After acquiring the site in 2008, the administration of former Chicago Mayor Richard M. Daley planned to use the parcel as the Olympic village as part of the Windy City’s bid for the 2016 games. Chicago lost the event to Rio de Janeiro in 2009 and the Bronzeville site sat fallow.

In 2014, the Reese site was shown as a potential site for the Barack Obama Presidential Center. The project, however, eventually settled on a more controversial location further south in Chicago’s Jackson Park where a lawsuit continues to delay construction.

That same year, critics of the lakefront location of the proposed Lucas Museum of Narrative Arts suggested the Reese Site as a possible alternative, but the city gave it little serious consideration. Caught in the middle of a legal battle between the city and parks’ activists, the Lucas Museum ditched Chicago in favor of Los Angeles.

By 2016, the City of Chicago was ready to get the Reese property off its hands and started a search for a private developer. Mayor Emanuel presented the 49-acre former hospital site and the adjacent 28-acre truck marshaling yards as “once-in-a-generation opportunity” to transform the Near South Side.

The city selected the Farpoint-led team to serve as Reese’s master redeveloper in 2017. The official announcement was short on specific details, but said the plan could include a logistics center, an event space, and more than 5 million square feet of commercial and residential development.

Amazon passed over Chicago for its second headquarters, but multiple megadevelopments that had hoped to attract the tech giant—Lincoln Yards, The 78, and the River District—forged ahead to secure zoning change and controversial tax increment financing (TIF) deals during the final days of the Emanuel administration.

The Michael Reese project, however, seems to be deliberately taking its time. “We are trying to avoid the experience of Lincoln Yards,” Farpoint’s Scott Goodman said in April at a panel discussion hosted by The Real Deal. “We’re trying to solve for a lot of those problems up front.”