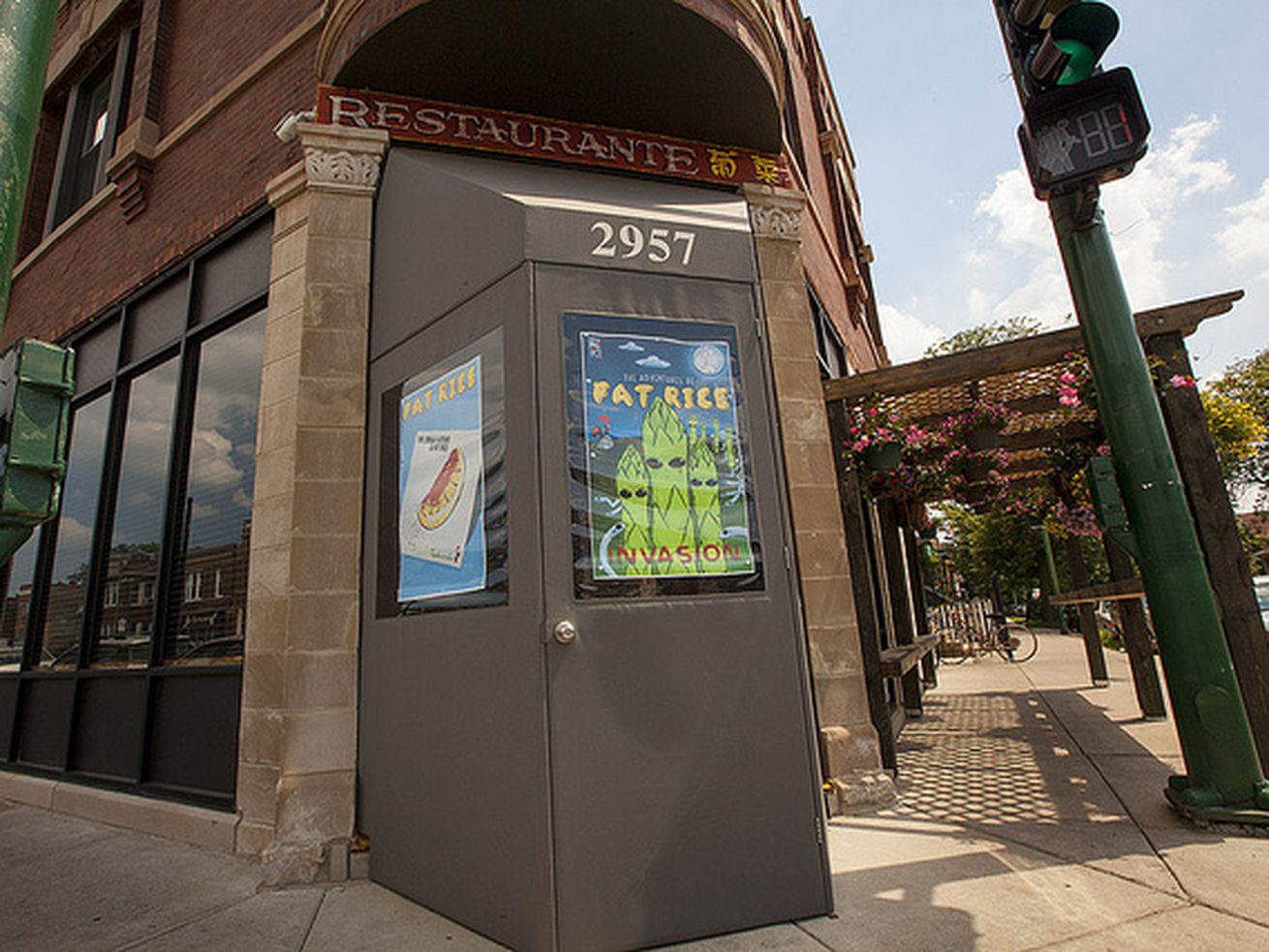 In January, Eric Williams, a prominent Chicago DJ and proprietor of the Silver Room — a business centered around African-American culture — started a discussion about racism in the city’s restaurants. The Facebook thread, which has continued to grow into February, hit on several topics, including restaurant playlists, cultural appropriation, and gentrification. Williams, who’s African American, started the discussion by sharing that he’s heard the N-word in music played at Fat Rice in Logan Square, as well as Wicker Park’s No Bones Beach Club and Furious Spoon.

“Maybe I haven’t been out in a while but it seems like the trend is for restaurants to play uncensored pop rap music. (Furious Spoon, Fat Rice, No Bones Beach Club – Chicago) just to name a few,” Williams wrote back on January 19. “[N-word] this, ‘B’ that. Am I getting old or this shit just wack? This is not a club, it’s a restaurant where I’d like to take my 10 year old daughter and not be subjected to this nonsense.”

Williams’s Facebook post allowed friends to freely talk about the phenomenon of hearing the slur that disparages African Americans. One wrote: “We don’t all have the same perspective on that word, but it IS unequivocally a racial slur.“ Another, a DJ, wrote: “I actually played at a restaurant in Wicker Park that shall remain nameless and was playing clean versions and the owner asked me ‘Why are you playing clean versions?’ I said ‘Because they’re kids in here.’ He was like ‘Nah man. Let it fly. You can play the dirty versions!’ I didn’t and won’t be back there.”

Maybe I haven’t been out in awhile but it seems like the trend is for restaurants to play uncensored pop rap music….

Williams told Eater that the common thread was that these restaurant are owned, at least in part, by white people who didn’t understand the racist history of the slur, calling it one of the most unique words in the English language. He even referenced writer Ta-Nehisi Coates’s explanation of why white people shouldn’t use the word at Evanston Township High School.

“I didn’t even remember how the food was because I was so distracted by the sound of the music,” Williams said of a visit to Fat Rice.

The management behind No Bones, a vegan restaurant that started in the Pacific Northwest, responded immediately to Williams, writing that they would make sure the slur never gets played again, and Furious Spoon issued a similar statement to Eater a week later. Furious Spoon is a ramen shop, and Williams noted that a friend made a connection between Asians and hip-hop; its co-owner Shin Thompson, who is Japanese-American, recently talked about Tokyo’s underground hip-hop culture with Chicago magazine. Williams said no connection grants someone who’s not black the right to use the N-word. Chicago’s largest restaurant group, Lettuce Entertain You Enterprises, has its own ramen shop, Ramen-San, with a hip-hop-heavy soundtrack, but LEYE president R.J. Melman told Eater, via a statement, that it uses clean versions of songs.

“We made a purposeful choice that profanity isn’t appropriate even if we love the original songs,” Melman said. “We want everyone to be comfortable in our stores.”

“I didn’t even remember how the food was because I was so distracted by the sound of the music.”

Also referenced in Williams’s original Facebook post is a summer 2018 visit to Fat Rice, the Macanese-inspired restaurant in Logan Square. Williams told Eater that his 8-year-old daughter, Sage, heard the N-word while eating.

“She said, ‘Daddy, I heard a naughty word,’” Williams said.

Fat Rice’s co-owner, the James Beard Award-winning chef Abe Conlon, declined an interview request via spokesperson, but the spokesperson provided two statements attributed to Conlon and co-owner Adrienne Lo. This was the first of them:

At Fat Rice, we appreciate music in all of its forms. We play everything from Fela Kuti and Sade to Big L and Run The Jewels. Music provides energy and atmosphere for our dining spaces, our staff and our guests. Much like our food, beverage offerings and service, our music selections are genuine, unfiltered and uncensored. Some of these songs we play contain strong language that may be considered offensive. However, we believe people should have a choice when it comes to their dining experience. Therefore, we have decided to post a visible disclaimer in all of our public facing forums including our entrances, website and reservation platforms to inform guests that during the hours of 5:30 p.m. to 10:30 p.m. they may hear music that contains explicit lyrics.

The idea of a disclaimer like this isn’t entirely unusual. Leghorn Chicken, in Ukrainian Village, also has one. Conlon emphasized the idea of providing diners with the musicians’ unaltered words, but Williams feels Conlon misses the point. If a song used a Jewish slur, Williams asked, how long would it take for that song to be removed from restaurant playlists? Chicago’s North Side is often thought of as more comfortable for affluent white people to live and dine. Williams wondered if a policy like what Fat Rice proposed would work at restaurant on the South Side, where much of the city’s African-American population lives.

Fat Rice’s ownership sent in another statement after told of Williams’s criticisms:

We can only speak to issues pertaining to our own business. We are looking at what can be considered offensive from a much wider perspective. Our staff and our guests are of all walks, genders, races, creeds, ages, and identities, and are from all over the world. Music is a direct extension of us and the restaurant as a whole. We appreciate all types, even though there are any number of words within the songs we play that may be deemed offensive by any particular individual. Therefore we are addressing the more encompassing issue of offensive content in public spaces. For a restaurant, when it comes to raw and undercooked foods, allergies, alcohol consumption, no guns, conduct, etc., it is crucial to have public-facing messaging and policies in place for the guest to be informed enough to make their own decisions about their experience. For us, music is no different. We always want to show progress for our guests and the entire dining community, and this is an important conversation to be a part of.

“It’s not censorship. It’s about you being in a public place playing music that people of color find offensive.”

This statement also failed to satisfy Williams. He and Conlon met at Big Star on February 11 in Wicker Park, where they spoke cordially for two hours, Williams said. Conlon told him what a big fan he is of hip-hop, that he wants to keep the experience authentic, and that he is against censorship. He also asked Conlon if he has ever used the N-word, and Conlon said no. But Williams believes that if it’s not okay for Conlon to use the word personally, he shouldn’t played the music at his restaurant. White rapper Eminem doesn’t use the slur, Williams pointed out.

“I don’t think he really got it,” Williams said. “It’s not censorship. It’s about you being in a public place playing music that people of color find offensive.”

February marks Black History Month, which Williams sees as an extra opportunity to educate. These three establishments aren’t the only restaurants or bars in Chicago engaged in this practice of playing unedited explicit music. Williams wants owners and chefs to examine who they are serving and what’s appropriate. Everyone should be entitled to good hospitality, and Williams has planned panels at the Silver Room to talk about the issue and bring more people into the discussion. Conlon told Williams that he never heard a complaint about the music at Fat Rice. Upon hearing that, Williams wants to encourage diners to say something to servers and restaurant managers if they are uncomfortable with the music.

The N-word doesn’t lend any authenticity, he believes; playing music with racial slurs shouldn’t make restaurants “feel they’re cool.” No amount of fan devotion to hip-hop makes the N-work okay to Williams. The slur leaves a bad taste in his mouth.

“I’m just trying to having a bowl of soup, to eat some noodles,” he said.