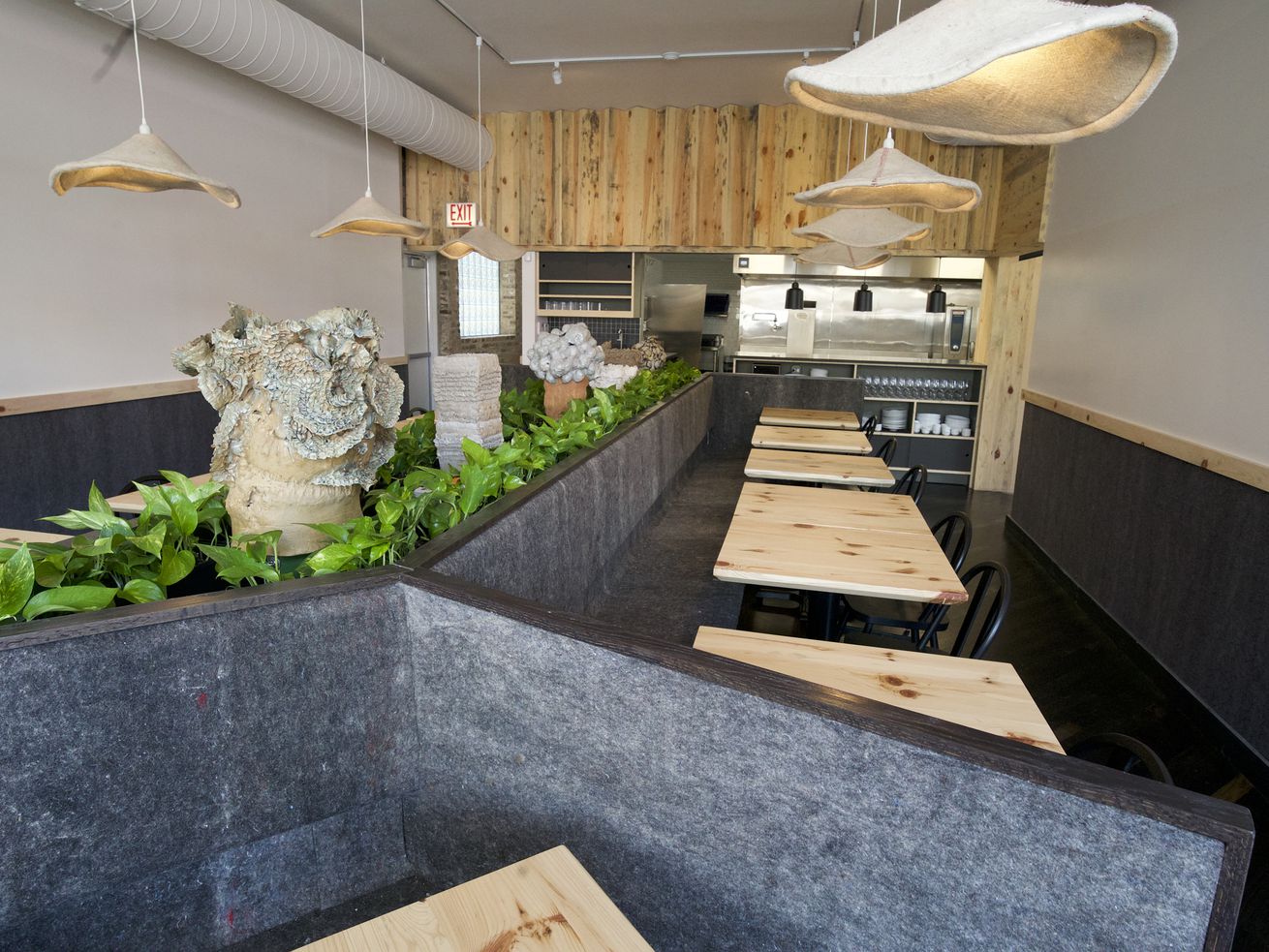 Wherewithall is located down the street in Avondale

Beverly Kim and Johnny Clark are excited about their new Avondale restaurant set to open by the end of the month. It’s located down the street from Parachute, their Michelin-starred restaurant. Wherewithall is a cozy spot with plenty of light-colored woods and fun details created to welcome customers for breakfast, lunch, and dinner.

The restaurant walks into a bar area. If customers head to their lefts, they enter the main dining room and could take a peek at the kitchen. Walking straight ahead, they’ll go through another door and into the courtyard.

The space was a former auto repair shop. Before that, it was a bar. When Kim and Clark took over the space, they said they could smell a sweet mélange of motor oil and beer wafting through. Their designer, Charles Vinz, also worked on Parachute. Kim called him family; he often posts up at Parachute during the day to work. He’s taken a playful approach to the space. The light fixtures are made of felt in the main dining room. The wood is red pine, salvaged from a Wisconsin forest. It’s used beneath the bar, in the paneling above the kitchen, and for the tables.

Kim said she liked how Vinz employs textures, describing it was similar to how she and her husband cook. Vinz allowed the building’s century-old history to remain. Above the bar, they left the fading tin ceiling intact. The wall to the left of the bar, in front of the dining room’s entrance, is one of Clark’s favorites. He likes how parts were left unfinished. It’s a reminder to the building’s previous lives.

Behind the 10-seat bar, Clark pointed out the wine fridges. He wanted them installed above the bar so customers could see the wine bottles through the glass. Too many times, wine is stored in-ground level coolers and customers can’t see inventory. It’s also a way to showcase wine labels, as Clark said the art is more and more creative.

Walk beyond the courtyard and visitors will find the building’s former garage. That’s a private dining room that should be ready by August. It’s an exciting prospect for Kim and Clark. They didn’t have a private area at Parachute; customers would have to buyout the entire restaurant if they wanted to throw a party. Wherewithall is more accessible to customers who don’t want to spent that much on an event.

Clark and Kim, who won a James Beard Award in May, didn’t have any news on their menu. They will draw from a variety of experiences and inspirations. So don’t expect a clone of Parachute’s Korean-American menu. They will pour Metric coffee, which is an important choice for an all-day restaurant. The restaurant will also have the same family-friendly vibe as Parachute.

Walk through the space below and stay tuned for news about an opening date.