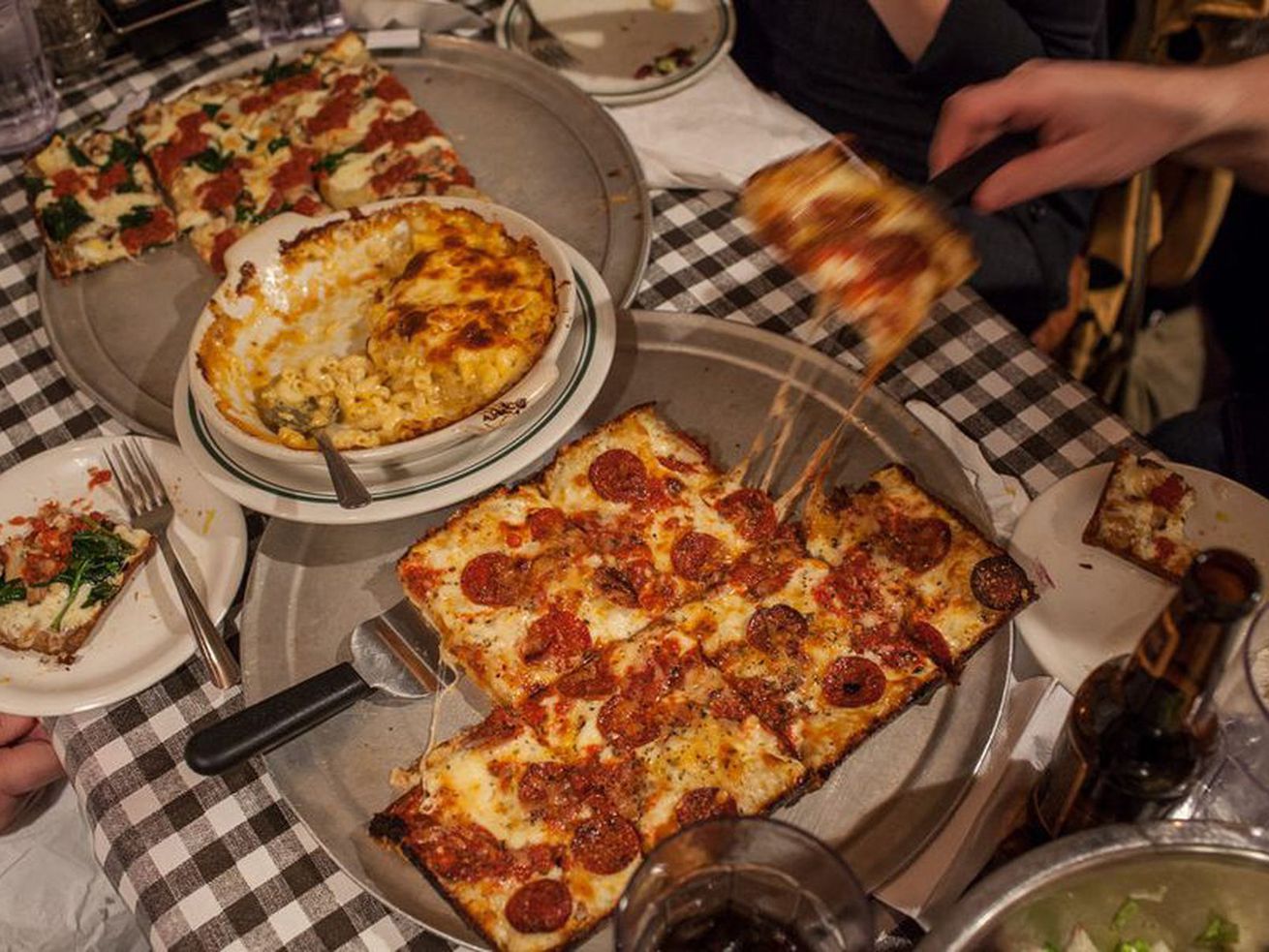 It’s a matter of when, not if for fans of the square pizzas

The popularity of Detroit-style pan pizza, a cousin of Sicilian-squared pies, continues to grow outside of the Motor City. That includes Chicago where local pizza makers including Paulie Gee’s (Logan Square), Union Squared (Evanston, Wrigleyville, the Loop), and Fat Chris’s Pizza and Such (Andersonville) have already introduced the city to the caramelized edges and melted Wisconsin brick cheese that help define the pizzas.

The Detroit chain that created the style, Buddy’s Pizza, hasn’t yet announced plans to open in Chicago, but they’re inching closer. Last month officials introduced plans to open a restaurant in Grand Rapids, Michigan. That location, slated for a spring opening, is the Buddy’s farthest away from Detroit — less than a three-hour drive from Chicago.

The crust is thick and the pizza is kind of a combo between Pequod’s Pizza’s burnt crusts and Little Caesar’s. Jet’s Pizza bakes its own version of Detroit pizza and is already in the Chicago market, arriving in 2012. Those pies are a bit puffier, and Jet’s restaurants are smaller and geared for take out and delivery. It’s a different experience at Buddy’s, a space decorated with customer photos, Detroit sports memorabilia, and the pizzeria-mandatory arcade video game machines. Jet’s was founded in 1978, 32 years after Buddy’s debuted in 1946.

Chicago and Detroit may not be able to agree on the Blackhawks or Red Wings, but Buddy’s Chief Operations Officer Wes Pikula feels a great reverence for Chicago. In particular, Pikula mentioned how he respects how the family behind Chicago deep-dish specialists Lou Malnati’s Pizzeria grew its business. Last year, Buddy’s received an infusion of money from private investment firm CapitalSpring so the chain could open more restaurants across the Midwest. Pikula wouldn’t commit to a timeframe, but it sounds like a Buddy’s expansion into Chicago is a “when” not an “if.”

“Obviously right now a lot of things are being looked at,” Pikula said. “Chicago, like Grand Rapids, has a lot of metro Detroiters transplanted whether it’s by work or choice. It’s a great town to live in, of course. It’s always something on our radar.”

The chain unveiled a new restaurant design with its Ann Arbor, Michigan location and subsequent openings, like Grand Rapids, should have the same look. Buddy’s is going mainstream, but at the same time it’s trying not to forget what made it popular. Though Chicago is home to plenty of Michiganders, restaurant owners would be wise to not assume that what works in that state works in Chicago. Leo’s Coney Island and HopCat both learned the hard way, realizing that what worked in the Mitten State may not work in Chicago.

Pikula knows this and walked the line between Detroit pride and understanding that Chicago is a different market. For example, Chicago’s pizzerias, on a whole, sell more sausage versus pepperoni. That’s a national anomaly thanks to Chicago’s premium sausage suppliers making the topping a hit locally. Buddy’s uses Detroit Italian sausage, specks of ground meat, on its pizzas. It’s not as substantial as Chicago where sausage slices and larger cuts of meat are used on pizzas. Buddy’s would be open to using Chicago-style sausage or other ingredients to pander to locals, Pikula said. Buddy’s also wants to work with schools and local civic groups.

“We want to be part of the community,” Pikula said.

There’s a balance between serving locals and being authentic. Buddy’s is a genuine Detroit brand, Pikula said, as it’s been there for the city’s highs and lows. As Chicagoans debate the merits of pizza, from deep dish to thin-crust tavern style, Pikula feels Buddy’s would be a welcome addition to the city’s pizza landscape. The company just won’t say when.

Be on the look out for Buddy’s eventual arrival in Chicago.