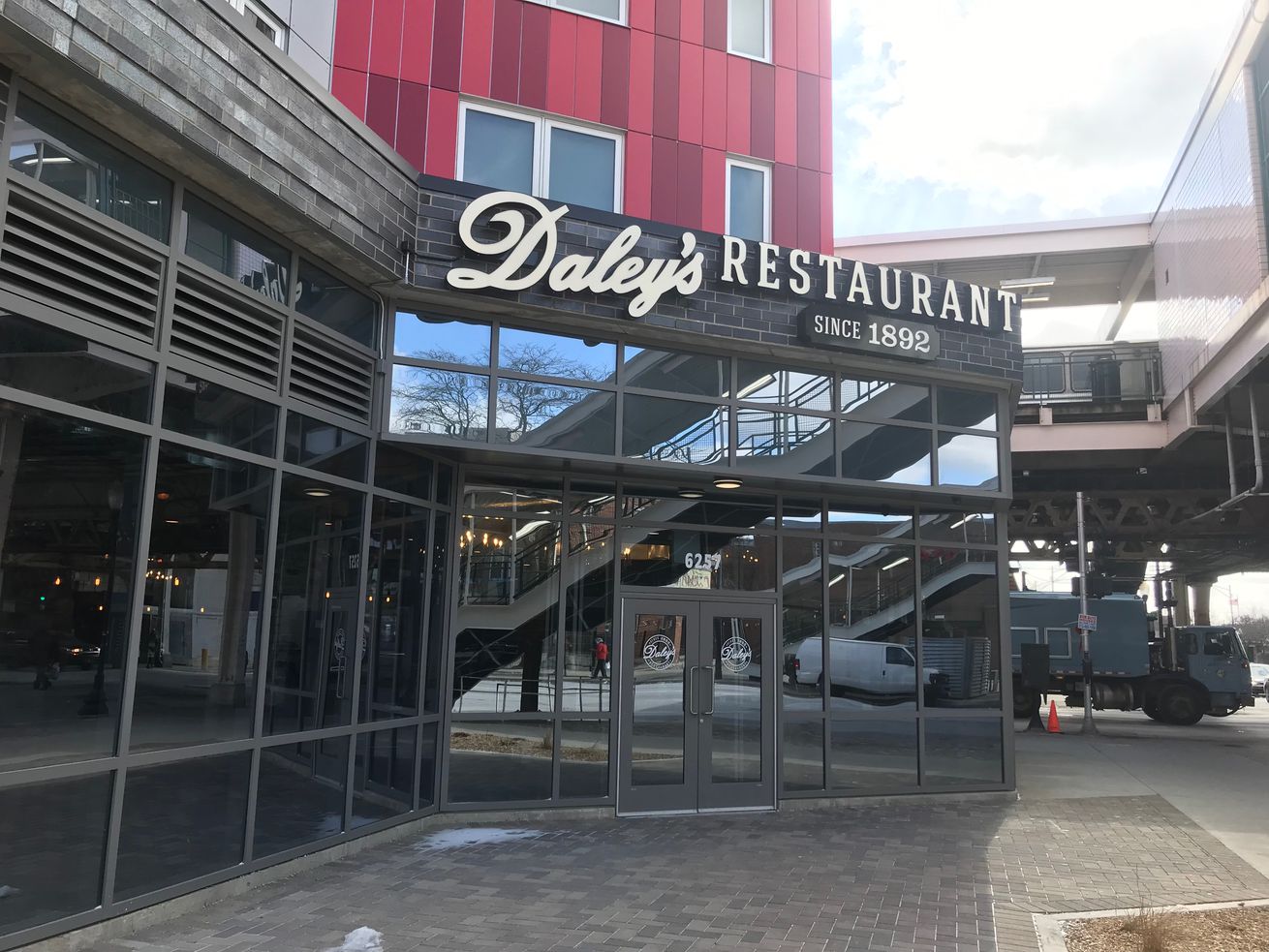 This week, the 127-year-old Woodlawn icon relocates across the street

Chicago’s oldest restaurant is reborn as Daley’s Restaurant, the 127-year-old Woodlawn diner — pending inspections — should unveil its new location this week. The move’s been in the works since 2017 when the old space was sold. The new Daley’s is across the street, part of a new development called Woodlawn Station at 63rd Street and Cottage Grove.

The old restaurant remains open and will still serve food until city inspectors give owner Mike Zar the needed approvals for the new location. Zar’s been buzzing back and forth for the last seven or so months working on plumbing, HVAC, and electrical issues: “I’m almost out of gas,” he said on Tuesday.

Daley’s is a fabled Chicago restaurant as its origins date back to 1892 when an Irish immigrant named John Daley (no relation to the former mayors) opened the diner. The new restaurant is Daley’s third iteration. Zar’s Greek family took over the restaurant in 1918. Zar’s great uncle added “1918” to the sign after the family bought the restaurant and that’s led to some confusion over the years to the restaurant’s true age.

Though the sign is iconic and welcoming, it won’t make the trip over across the street. Zar said they couldn’t find a space for it. He’ll still keep it as a keepsake. Zar remembers working at the restaurant as a teen with his father. He hopes customers keep their own special memories with them after the move.

“That’s what’s bittersweet about it, [leaving behind] all the memories that were made in that place,” Zar said.

The restaurant grew to be a community beacon where families would eat after Sunday church and customers would grab a bite late night on a weekend. The pie case has delicious treats, and the restaurant serves dependable breakfasts and soul food. Entrees come with soup or salad and a side providing patrons with extra value.

The menu will remain the same at the new restaurant, consisting of the same ”honest food” that’s survived more than a century. Zar said he may add items eventually. The kitchen is bigger and there’s more equipment at the new restaurant. Despite having less space than across the street, the new location seats more people at 180 compared to 130. The new restaurant is more efficiently laid out, Zars said.

Longtime employees, like Rose Gillespie — a waitress whose worked 37 years at the restaurant — will work at the new location. (“Rose is fine; nothing can stop Rose,” Zar said.) Gillespie will have to learn a new layout and a POS system. During the transition period, they’ll only serve breakfast and lunch. They’ll add dinner within two weeks.

They went for an industrial feel using some traditional Chicago materials in the new space. They used Chicago common brick on columns, and “classed it up” with chandeliers. Zar said he felt like a part-time maintenance man dealing with building issues at the old location, and that he’s excited to move into the new building. It’s also giving them an opportunity to modernize. There are five TVs, “good” WiFi, and they’ll also use online delivery services like DoorDash and Uber Eats.

For the most part, Zar said his customers have the same concerns as he does, that they’re being forced to let go of cherished memories. At the same time, Zar is grateful for the chance in the new mixed-income development from Preservation of Affordable Housing. Woodlawn Station features 55 apartments and 15,000 square feet of retail space at the CTA’s Green Line 63rd Street stop.

“It’s an amazing opportunity just to say the least,” Zar said. “Preservation of Affordable Housing gave us a great corner spot, I couldn’t be more grateful.”

Originally, the developers thought Thursday would be opening day, but they hit a hiccup with inspections. But they’re itching to get going. The old photos are already on the wall at the new space. They’ll be celebrating in Woodlawn, but if any customers want to eat at Daley’s at its current iteration, they may have only two days to experience the nostalgia.

PrevPreviousDowntown penthouse with huge zen-inspired terrace returns for $3.1M
NextAlvin Ailey returns to Chicago for its annual visit to the Auditorium TheatreNext