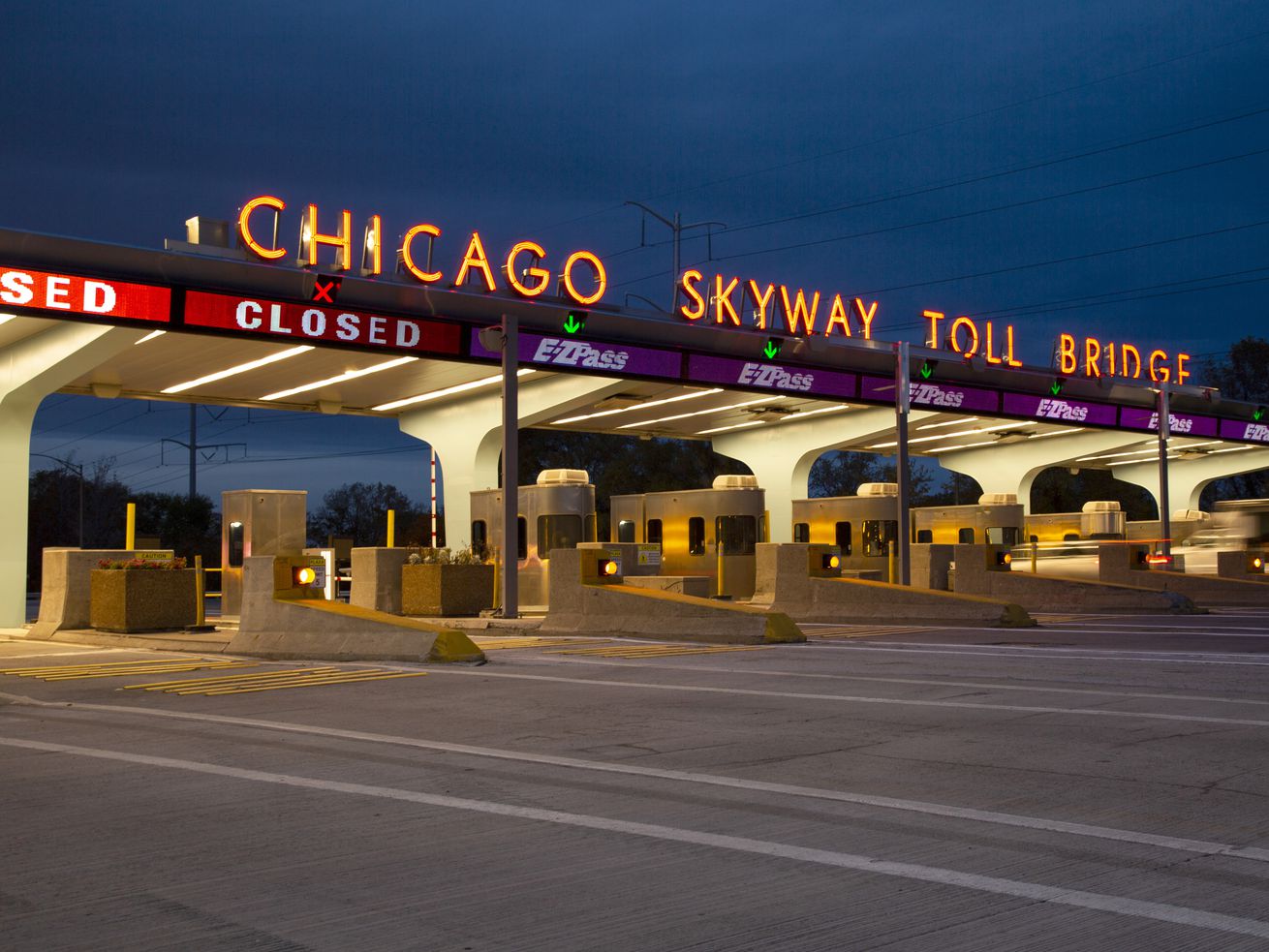 Described as “ultra-modern” in 1958 when it first opened, the Chicago Skyway toll plaza connecting the Indiana Toll Road to Illinois’s Dan Ryan Expressway had devolved into anything but in recent years. The iconic gateway to the city was in need of modernization, notably new solutions to help drivers and reduce the confusion that caused traffic congestion.

Under a $7 million plan to upgrade the tolling plaza, the Skyway’s private owners tapped local architecture firm Skidmore, Owings & Merrill (SOM) to remove decades worth of piecemeal modifications and bring the midcentury structure back to its original streamlined glory.

The most obvious element of the restoration project is a large highly-visible sign bar, color-coded for each lane. SOM decided to float the sign bar on metal brackets to create separation between the existing canopy.

“In the 90s, they installed all of the lane signs in the middle of the canopy fascia, which was a major defining element of the original structure,” explained SOM designer Michael Jividen. “By pulling that down and away, it allowed for a more faithful restoration.”

“The attitude with historic preservation is keep what’s historic and clearly identify or set aside what’s new,” added SOM’s Scott Duncan. “I think it’s quite clear in our arrangement that we tried to have the lightest touch possible on the existing historic elements.”

The signage is joined by new automated payment machines that accept credit cards as well as touchless pay from Apple, Android, and Google devices. The machines feature video instructions and upgraded intercoms to improve transaction speed and customer service.

The plaza’s instantly recognizable neon sign was swapped for an LED replacement—an element that was particularly difficult to match, its designers say. The canopy was decluttered of obsolete tolling equipment and its original linear lighting arrangement restored. In a move to be more sustainable, the top of the structure was configured to accept future solar installations.

The Skidmore, Owings & Merrill team also set about restoring the original paint scheme of the plaza’s vertical columns, which were last painted a bright shade of yellow. “There was no documentation of the original color,” Jividen explained. “But we found an old Skyway promotional video in the Richard J. Daley archive at UIC and were able to suss out the color as kingston aqua.”

By bringing the Skyway canopy back to its original glory, the historic design elements like its curving toll booths, graceful supports, and Art Deco-inspired typography shine once again. “The design reflects the streamlined aesthetic of the era,” added Duncan. “People were making everything rounded—even things that don’t move like toasters and drinking fountains. It embodies the positivism and the optimism of the machine age.”

The ability to combine the sixty-year-old architecture of the canopy with the latest tolling technology is “a testament to the progressive and versatile nature of the original toll plaza design,” said Skyway Concession Company CEO Fernando Redondo in a statement. The company is exploring future initiatives like installing gateless tolling, launching a dedicated payment app, and engaging with state legislators to test autonomous vehicles.

For some visitors, the improvements may go unnoticed. When thinking about the Skyway tolling plaza, a lot of people simply don’t remember the bad colors, the tacked-on lighting, and cluttered collection antennas and other equipment overhead.

Following the restoration, the now site exists as how people want to remember it: a classic red sign mounted atop a historical piece of elegant midcentury infrastructure. An iconic gateway that provides a lasting impression for first-time visitors and a comforting welcome to road-weary Chicagoans after a long drive home.