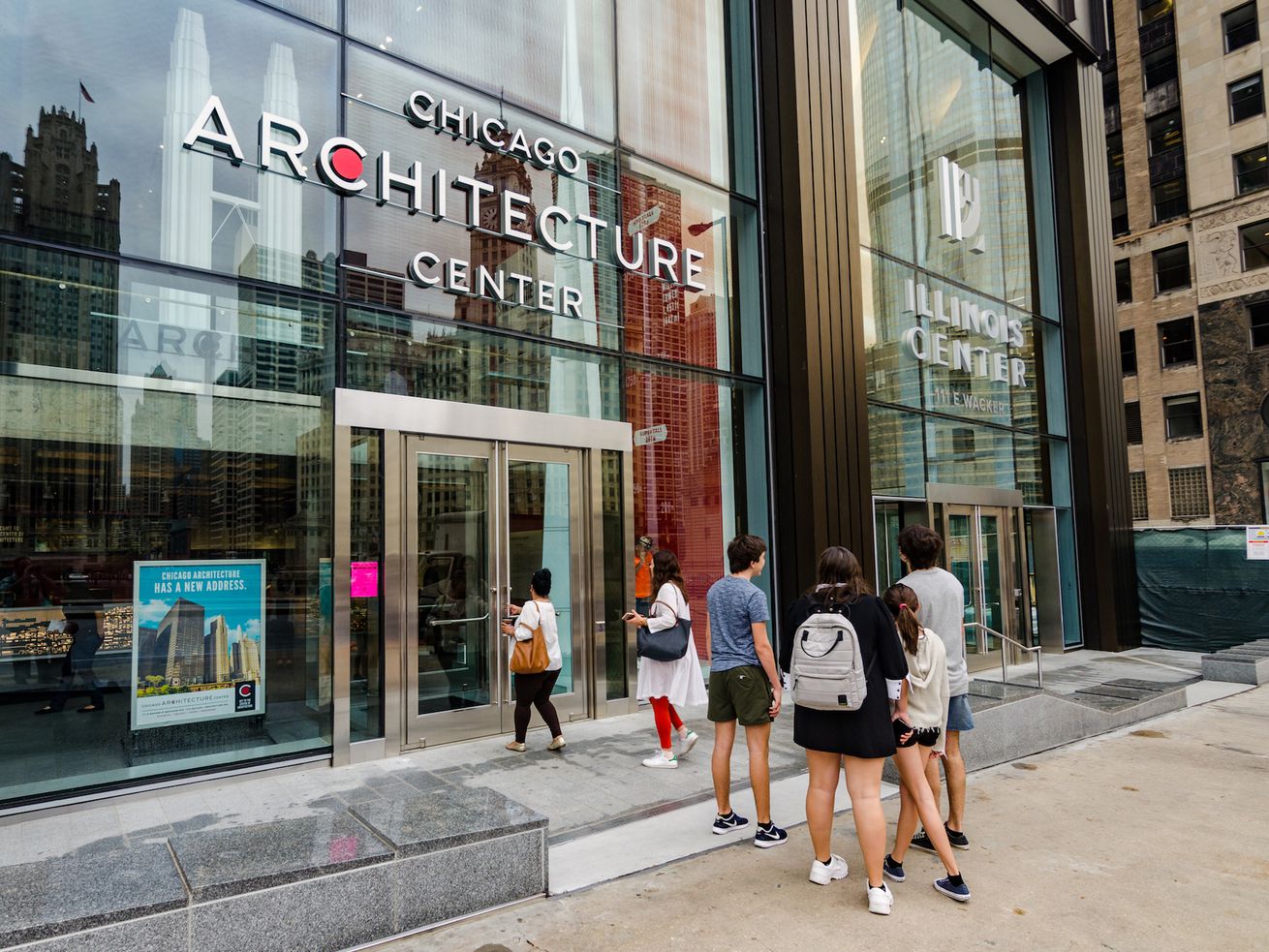 The wait is finally over as the new Chicago Architecture Center officially opens its doors to the public starting Friday, August 31—just in time for Labor Day weekend. The mayor proclaimed the date as Chicago Architecture Day as part of the center’s weekend-long grand opening celebration.

The nonprofit group previously known as the Chicago Architecture Foundation opted for a new name too, dropping “foundation” in exchange for “center.” The move further signifies the arrival of an active cultural destination along Chicago’s evolving riverfront at 111 E. Wacker Drive.

The Chicago Architecture Center makes its new home at the base of Mies van der Rohe’s 1970 Illinois Center office complex. The design from Chicago-based Adrian Smith + Gordon Gill Architecture extended the broad Miesian columns down to the sidewalk and enclosed what was once a raised outdoor plaza to create the 20,000-square-foot space.

Forty-foot windows flood the interior space with light, showcase the exhibits to the outside world, and afford a unique waterfront view of notable downtown architecture such as Tribune Tower, the Wrigley Building, and Michigan Avenue’s Foster-designed Apple Store.

Visitors are immediately drawn to its oversized building models located in the center’s second-floor Drake Family Skyscraper Gallery. The space is home to an exhibit titled “Building Tall” showcasing some of the globe’s highest projects.

A collaboration with the Council on Tall Buildings and Urban Habitat, the exhibit includes models of the Chicago skyscraper formerly know as the John Hancock Center, Malaysia’s Petronas Tower, and the 1-kilometer-tall Jeddah Tower currently under construction in Saudi Arabia.

In the center’s Chicago Gallery, the focus is more on the Windy City’s own architectural legacy, neighborhoods, and future developments. Here, an improved version of CAC’s popular 3D-printed model of Chicago makes a highly anticipated return.

Dubbed the Chicago Model Experience, the miniature map has been expanded from 1,300 to over 4,000 buildings. It now features lighted overlays illustrating the city’s early growth, the destructive scope of the Great Chicago Fire of 1871, and the area’s subsequent rebirth. The interactive exhibit is steered by guest via touch screen controls from museum planning and design firm Gallagher & Associates.

Made possible through $12 million in private funding, the new center boasts a lecture hall, hands-on design workshops, classrooms, and a gift shop stocked with a wide array of design books, home decor, and CAC-branded swag. There is also a ticketing hub for the center’s 85 guided tours—offered on foot, bus, “L” train, and riverboat. The latter is especially convenient thanks to the center’s location directly above the docks lining the Chicago Riverwalk.

The center moved from its previous home at the Railway Exchange Building at 224 S. Michigan Avenue on Chicago’s “Cultural Mile” across from Grant Park. The nonprofit spent more than 25 years in the D. H. Burnham & Company-designed building.

The CAC is open seven days a week, 362 days a year—closed only on New Year’s Day, Thanksgiving, and Christmas. For more info visit architecture.org.

PrevPreviousFive opera films that hit the high notes
NextLabor Day 2018: What to see and do in ChicagoNext