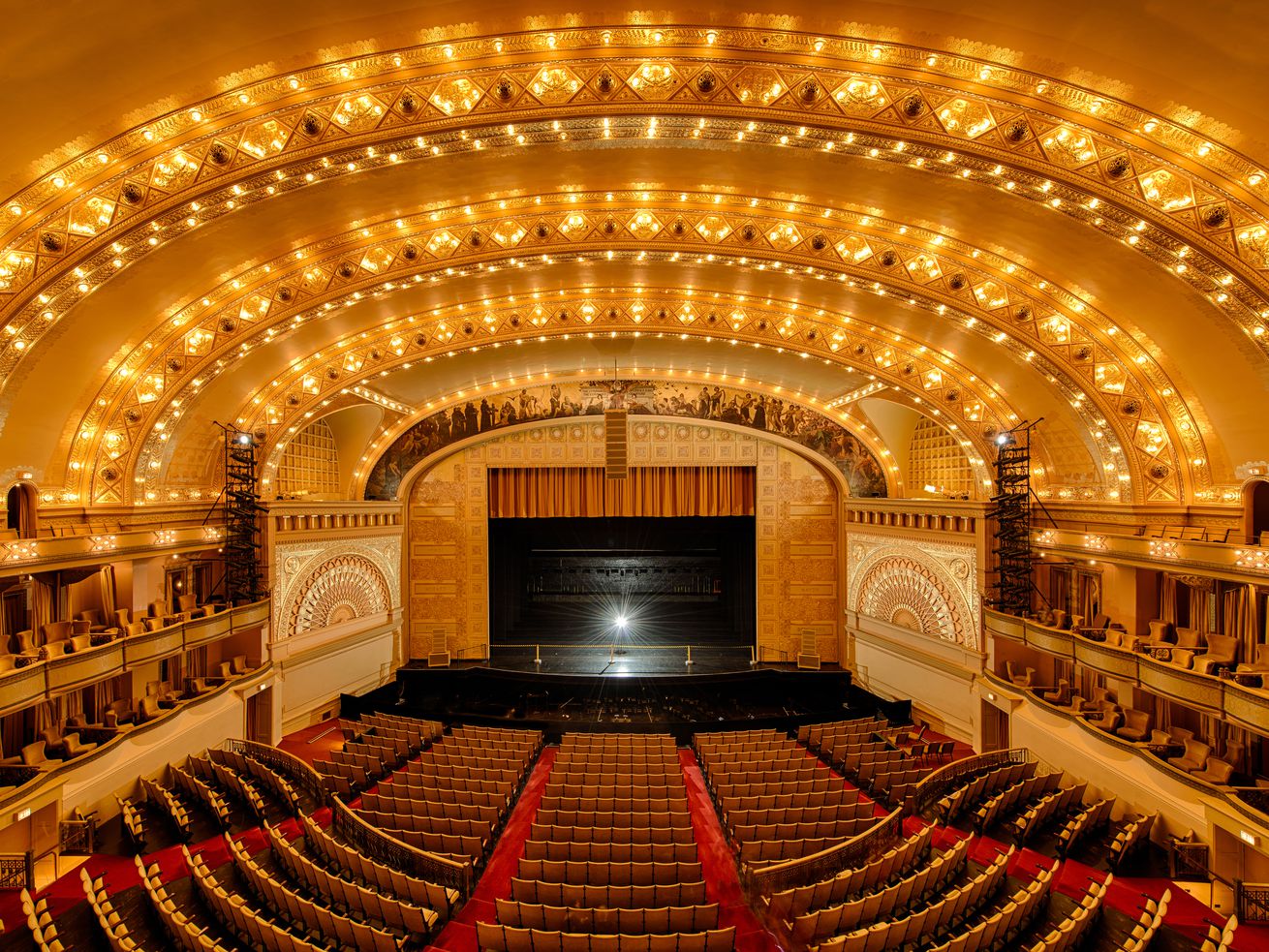 The most recent section took 200 hours of work

The Auditorium Theatre is an immense architectural achievement—thick, rough-cut stone blocks on the exterior protect the ornate, golden hall inside. In 1889, Louis Sullivan and Dankmar Adler completed the theater, which was one of the tallest, largest, and heaviest buildings at the time.

Throughout its 129 years, some of the original details were lost. But through multiple conservation and restoration efforts, that’s changing. One of the most recent projects, which began in 2014 with The Elissa Lobby, focuses on Sullivan’s original stencil work.

On Wednesday evening the theater debuted a newly completed section of stenciling in the north inglenook with an event featuring the city’s cultural historian Tim Samuelson and Anthony Kartsonas of Historic Surfaces, who was responsible for the restoration work.

The inglenook centers around a grand fireplace mantel and features beautiful mosaic floors, built-in benches, ornate gilded and bas-relief details, and millwork. Now with the stenciling complete in this area, it looks very close to the 1889 version. In January, there are plans to continue the restoration on the second inglenook and other archways on the floor.

Bringing the theater back to the way it was in 1889 highlights the incredible detail that isn’t seen in many buildings today. For example, within the theater there are two murals on the north and south ends that depict winter and spring. After analyzing original paint chips from both ends, it was discovered that Adler and Sullivan had chosen slightly darker shades for the winter side and lighter shades for the spring side, according Samuelson.

This exemplifies exactly why many people love the Auditorium Theatre, subtle details that come together to create an experience. “Sullivan’s work is memorable because of what you can’t see,” said Samuelson.

It has impact because of the way it makes visitors feel. Sullivan and Adler played with layering elements and shifting from small enclosures to expansive areas which wasn’t common at the time.

The archival photographs from the Art Institute show 24-karat gold-leafed ceiling arches and hundreds of Sullivan’s intricate patterns, but unfortunately many coats of paint cover the artwork now. One reason it disappeared was because some ladies attending performances thought the detailed patterns clashed too much with their outfits, according to Samuelson. And perhaps, the change indicates how quickly the ornate style fell out of popular favor.

For Samuelson and other preservationists, the stencil work is crucial. Without those details, “it’s like having the finest Stradivarius, but just a little out of tune,” he said.

The archival photographs were helpful, but still hard to decipher so Kartsonas had his work cut out for him. The combination of giant flash bulbs and the highly reflective nature of the gold leaf meant the stencils were an element that was easily blown out, and therefore lost, in photographs. It also wasn’t possible to remove the added layers of paint because the original stenciling was so old and gold leaf so delicate. It would have just been wiped away, according to Samuelson.

In addition to the archives, Kartsonas examined paint underneath a microscope in order to match the historic colors. After the work of recreating the patterns and matching colors, the stenciling process began which was done entirely by hand. Four artists spent about 200 hours carefully drawing, cutting, and painting the patterns onto the arches and ceilings of the inglenook.

Back in 2001, Kartsonas and his company did some stencil work for the theater but were able to use gold leaf. He placed the largest order for gold leaf the wholesaler had seen in years. Today it would have cost eight times as much for the same amount, Kartsonas said, so it makes sense that this time around the theater used a more cost effective matching metallic paint.

True gold stenciling reflects light, and actually makes a room around 60 percent brighter, Kartsonas said. And while that’s not what’s being used now, the metallic gold paint will certainly bring a new feeling into the theater. The beauty of the stencil’s intricate patterns is that it calls attention to the architecture’s dazzling layers.

Standing at the entrance of the inglenook, visitors can admire the stenciling there and beyond the cut-out arch to the patterns on the back wall of the staircase. The shimmery quality of the gold stencils against the matte paint changes depending on where you stand, so with each new stencil it’s almost like the building is coming back alive.