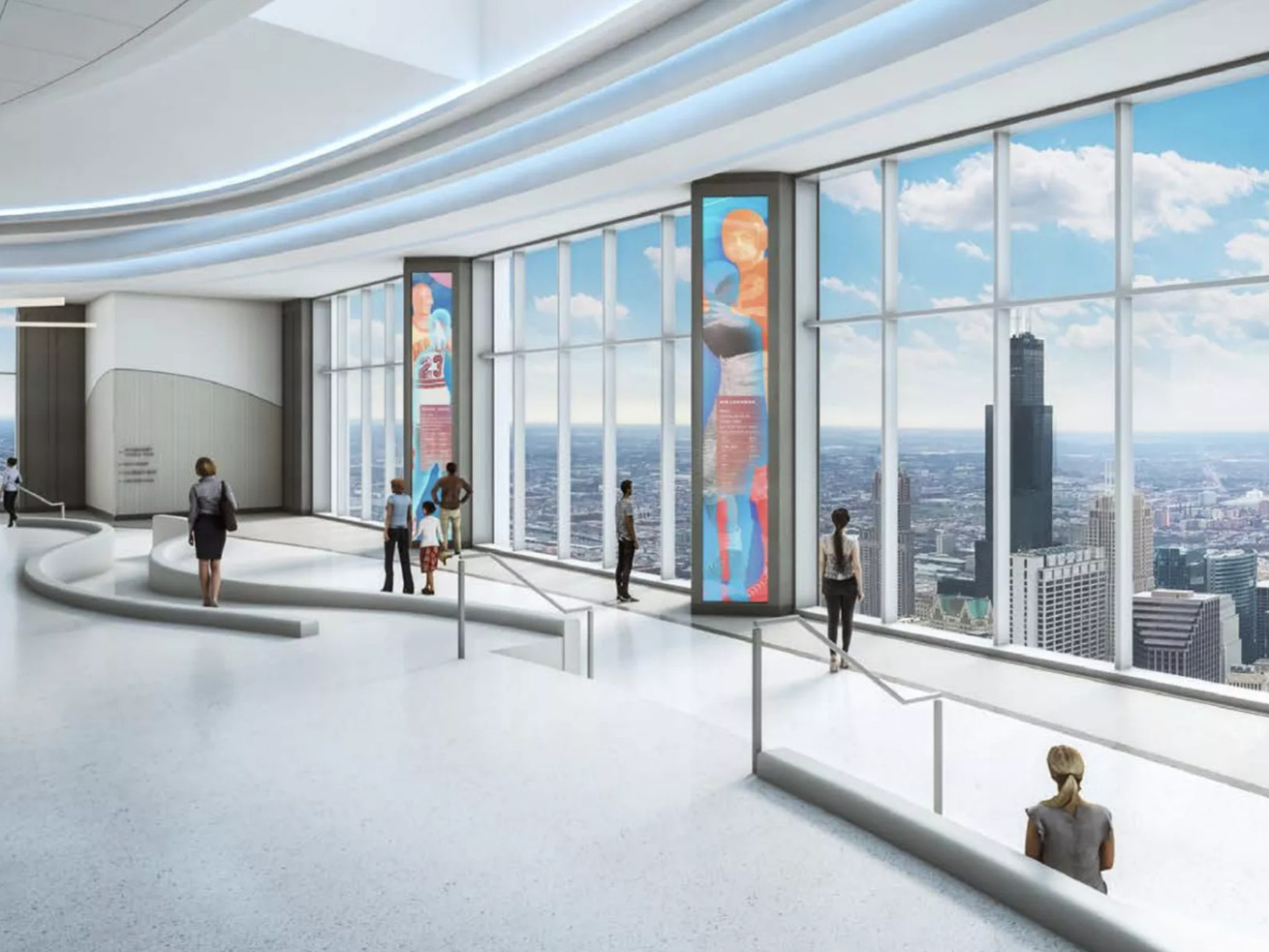 At the last Chicago Plan Commission meeting of the year, a number of notable developments were on the docket. All were given the okay, except for a residential tower on the Near North Side which received an unusual split vote. Here’s a look a what happened at Thursday’s meeting:

A proposal to add a public observation deck and a 1,185-foot exterior glass elevator—North America’s tallest—to downtown’s Aon Center got the OK. The project could begin construction as early as next spring, provided it earns full approval from the Chicago City Council as expected.

Building owner 601W Companies unveiled the proposed changes in May. The design went before the city with minimal changes, save for the removal of exterior LED lighting from the elevator and the addition of streetscape improvements such as new pedestrian crosswalks.

The $185 million addition, designed by Chicago-based architectural firm Solomon Cordwell Buenz, includes a new entrance pavilion at the office building’s base as well as a rooftop “thrill ride” that would dangle tourists in a glass-bottomed gondola over the tower’s edge.

The Aon Center attraction will become the city’s third observation deck—joining the Willis Tower’s Skydeck and the 360 Chicago observatory at 875 N. Michigan Avenue, formerly the Hancock Center. Upon its completion, Chicago will join New York as the only cities in the country to have three or more observation decks.

Commission approves amended plan for the Aon Center at 200 E. Randolph St. to allow for a new observation deck with an exterior elevator, a “thrill ride” and the construction of North America’s tallest glass elevator at 1,185 feet. pic.twitter.com/6Z7hXo1zux

Additionally, the commissioners voted in favor of zoning changes supporting the restoration of two historic former movie palaces: the 93-year-old Uptown Theatre and 92-year-old Congress Theater. Partners Jam Productions and Farpoint Development will bring the Uptown back to life and expand its capacity to 5,800 people.

Commission approves plan for the Uptown Theatre, which will allow an increased capacity of approximately 5,800 people. Work will begin next summer on the massive $75 million rehab effort. pic.twitter.com/qpYscRCe5F

Commission OKs plan for rehab of the Congress Theatre in #LoganSquare. The plan allows for the rehab of the theatre, 14 affordable units and a 50-room hotel. Additionally, a seven-story building across the street would have 72 units, 30 percent of which would be affordable. pic.twitter.com/MjOgTVEJT4

Also approved was a 17-story, 318-unit micro-apartment development at 808 N. Wells Street in River North, a five-story addition to the Chicago Tabernacle of the Assemblies of God in Kilbourn Park, and a new master plan for the area surrounding the Jefferson Park Transit center.

Commission OKs plan at Wells and Chicago: a 17-story, 318-unit building with retail and 16 parking spaces. To achieve that density, the developer of the $75 million project will pay $3.04 million in downtown bonus fees. All required 32 affordable units will be offered on site. pic.twitter.com/4aQyxvqvQQ

Commission approves plan from the Chicago Tabernacle of the Assemblies of God at 3201 N. Cicero Ave. to allow the church to build a five-story addition with ground floor commercial space and a community center. pic.twitter.com/rOj0d5w1Jy

And finally, in an unusual draw situation, the commissioners voted 6-6 regarding the third phase of the Old Town Park redevelopment of the Near North Side’s Atrium Village mixed-income housing complex.

Developer Onni Group was seeking approval for a 41-story tower with 456 rental units, office space, retail, and parking for 193 vehicles. Instead, the HPA-designed proposal will now head to the city’s Zoning Committee for a vote without a formal Plan Commission recommendation.

The Plan Commission split 6-6 today on an amended plan for a 41-story, 456-unit tower near Wells and Hill streets that is 10% affordable and includes a $2.78 million bonus system fee. The proposal will be forwarded to zoning committee without a formal Commission recommendation. pic.twitter.com/NvAUZBIJs3