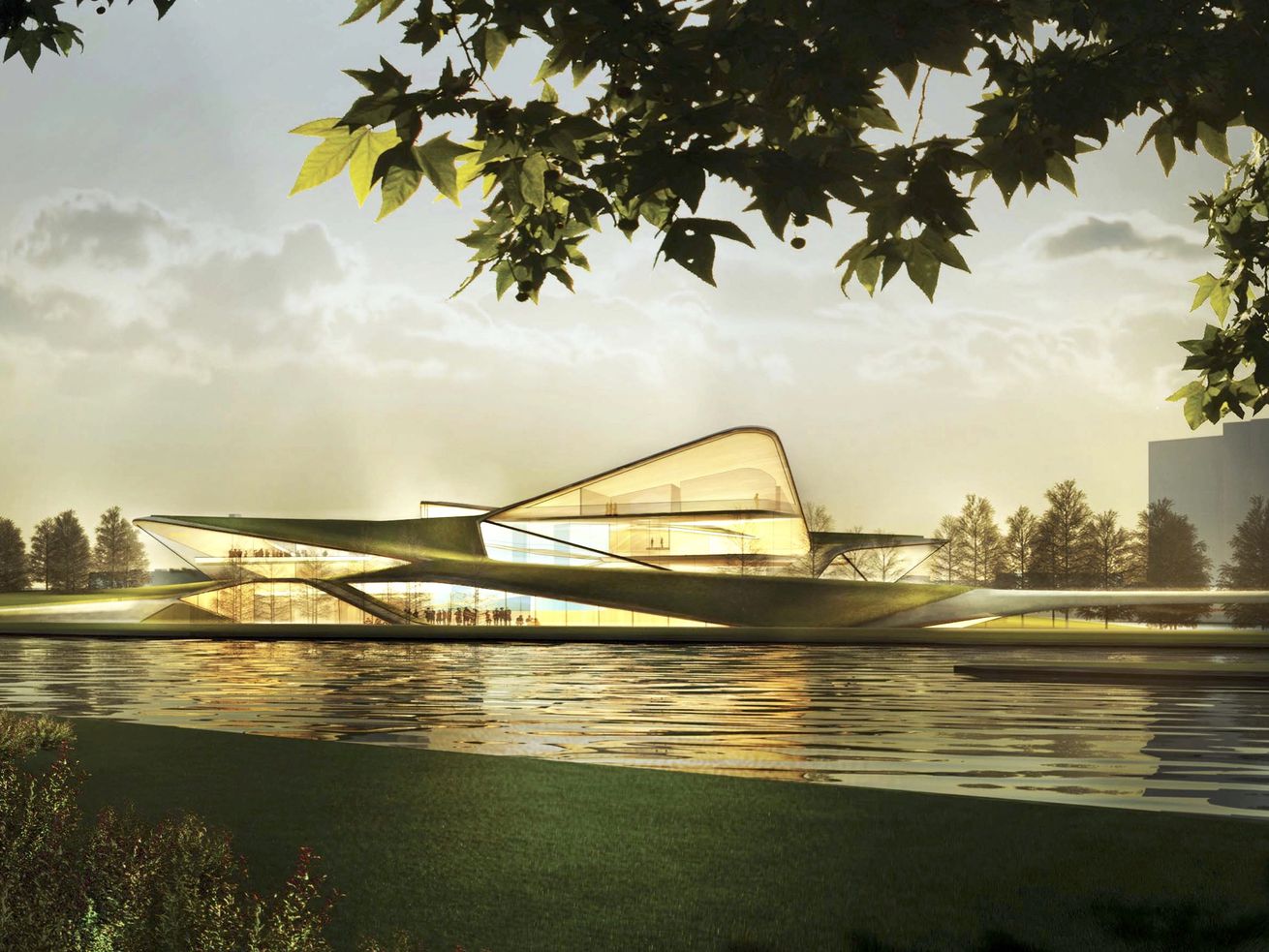 As Chicago’s Obama Presidential Center heads to court this week over a lawsuit aimed at blocking its construction in historic Jackson Park, three alternative designs and locations for the presidential archive, museum, and community center emerged from obscurity on Friday. The unrealized plans come from the University of Chicago, the organization behind the winning bid for the Obama Center.

“In its initial request for qualifications, the Obama Foundation indicated that it would consider the proposals on a confidential basis, for use in its selection of a host city,” U of C spokesman Jeremy Manier said in a statement Friday, published by the Chicago Tribune. “However, in light of recent developments, the proposals will now be available in the public domain, which the University supports.”

The first, from New York-based Diller Scofidio + Renfro (DS+R), showed an angular building comprising several swooping lobes at the Jackson Park site that was ultimately selected by the Obama Foundation. The University of Chicago labeled the plan as “Museum Campus South” in reference to its proximity to the Museum of Science and Industry and other cultural institutions. DS+R is behind an upcoming U of C conference center known as the Rubenstein Forum—the firm’s first Chicago commission.

A second proposal from London-based Adjaye Associates placed the center along the western edge of Washington Park. Led by David Adjaye, designer of the Smithsonian National Museum of African American History & Culture in Washington, D.C., the proposed campus called for various wooden structures, a welcome plaza, and upgrades to the adjacent CTA Green Line station. The plan would have also included community center and performance space—components that found their way into the final Tod Williams and Billie Tsien design.

Jeanne Gang’s Chicago-based architecture firm Studio Gang was behind a third Obama Center design, proposed for the site of the nine-hole golf course north of the South Shore Cultural Center. Envisioned as an oversized compass, the lakefront complex had four wings aligned with the cardinal directions. The design included lakefront access, an indoor basketball court, and an auditorium with downtown skylines views. Although the location was not selected, plans are in the works to combine the Jackson Park and South Shore golf courses into a single 18-hole tournament-quality course.

The Obama Foundation chose the University of Chicago’s proposal in 2015, beating competing bids from Columbia University, the University of Hawaii, and the University of Illinois at Chicago. The Jackson Park site was announced in 2016 followed by the selection of Tod Williams Billie Tsien Architects from a shortlist of seven finalists.

The recent move to release the once confidential designs appears to be a proactive (albeit somewhat last minute) move to show greater transparency in advance of Wednesday’s court hearing in response to a lawsuit filed this spring by nonprofit activist group Protect Our Parks and three individuals.

The suit alleges that because the center will provide only digital access to the former president’s documents versus of a more traditional physical archive, the project is technically not a presidential library and therefore should not be placed on public land. The center is also the topic of an ongoing federal review.

Although the project isn’t expected to break ground until next year, work began this summer to clear roughly 40 trees for a new Jackson Park athletic field. The running track, which is meant to replace an existing facility displaced by the center, is partially financed through a $3.5 million Obama Foundation donation to the Chicago Park District.

In August, a court ruled that work—including tree removal—could continue. At the same hearing, however, Protect Our Parks was granted permission to issue subpoenas to gather information on how Jackson Park became the final site of the future presidential center, reported the Tribune at the time.

Zoning entitlement for the Obama Presidential Center were approved by the Chicago Plan Commission in May of this year. In September, the Chicago City Council introduced an ordinance outlining a planned 99-year, $10 land lease to the Obama Foundation.