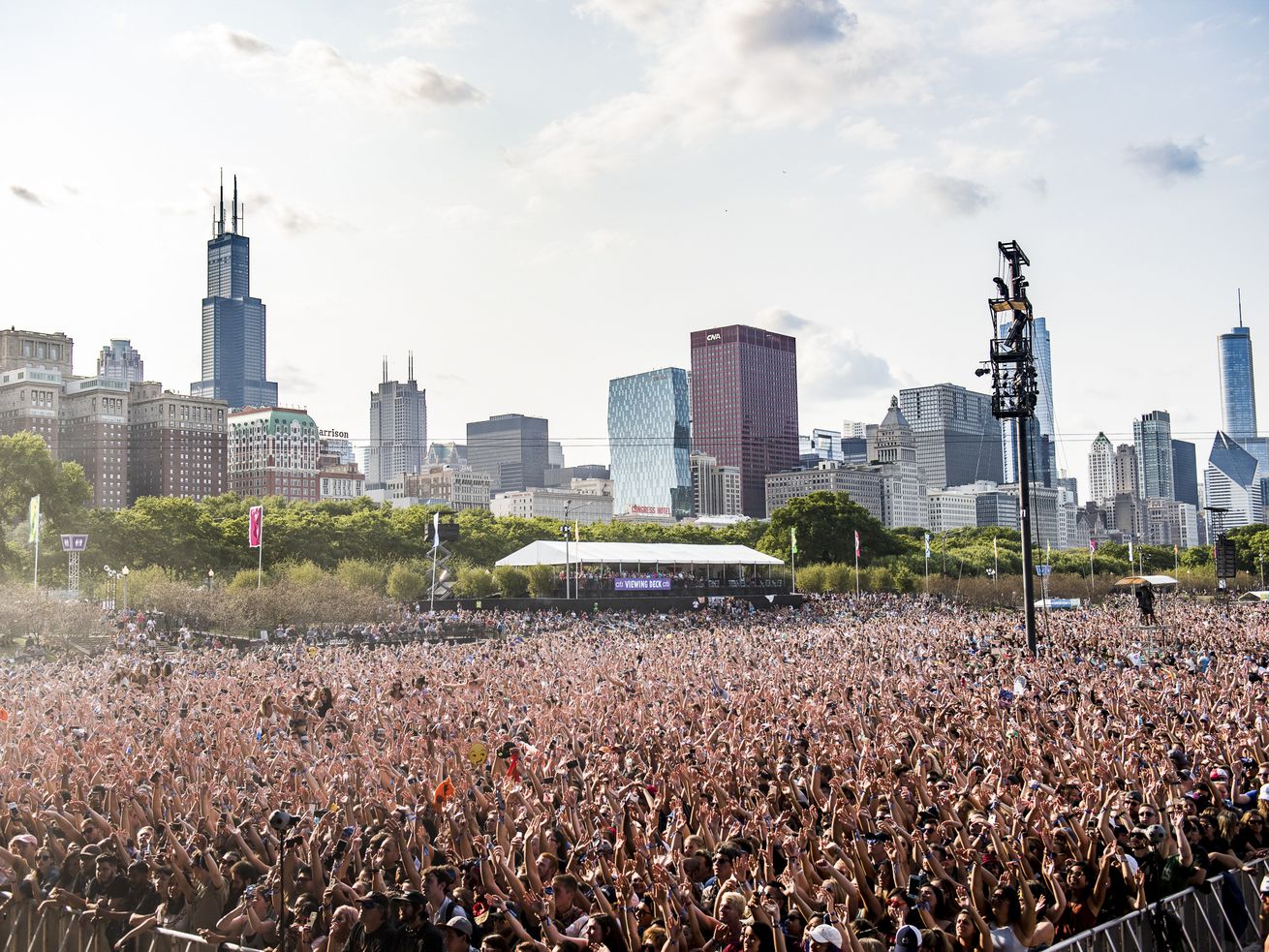 The thousands of concert-goers that descend on Chicago each year for Lollapalooza are there for the music and festival atmosphere above all else. But there’s no denying that a large part of the event’s appeal is its unique urban setting in Grant Park.

Located in downtown Chicago’s “front lawn,” the festival owes a lot to its backdrop featuring some of the city’s finest—and newest—architectural gems. Like the ever-changing park itself, the glass and steel scenery has also evolved and expanded since Lollapalooza began in 1991.

Whether you are a first-time visitor or a seasoned local in need of a quick refresher, here are some of the notable buildings you can see during Lollapalooza.

For this rundown we start with the northeast corner of Grant Park, (facing the Bud Light stage), and work to concert-goer’s left, ending at the southeast quadrant near the Museum Campus.

Looming over the northeast corner of Grant Park, this skyline-changing skyscraper has come a long way since last year’s concert. The slender, Jeanne Gang-designed hotel and condo tower has topped out at 1,198 feet and is showing off its distinctive facade comprising six different shades of glass. Vista Tower will claim the title of Chicago’s third tallest building when it opens in the spring of 2020.

Next up is the Blue Cross Blue Shield Tower. Though this office building currently rises 57 stories, it stood at just 33 floors when it opened in 1997. A vertical expansion between 2007 and 2010 allowed the insurance company to grow into a larger space as needed. The addition also created an impressive double-height sky lobby halfway up the structure.

Initially known as the Standard Oil Building or “Big Stan,” this 1973 skyscraper was later renamed the Amoco Building and then the Aon Center. The monolithic tower’s white facade was originally finished with 43,000 slabs of thin Carrara marble but was later re-clad in granite after the stone was deemed structurally unsafe.

Over the winter, the building’s owners won approval to build a 1,000-foot-long glass exterior elevator to bring tourists to a proposed observation deck slated for the tower’s 82nd and 83rd floors. The project also calls for a thrill ride in the form of a glass pod that would rotate and dangle over the edge of Aon’s roof.

This high-rise duo once known as One and Two Prudential Plaza was recently renamed “One Two Pru” by new owners Sterling Bay. The two-building complex includes a 41-story tower that was home to Chicago’s highest roof and observation deck when it opened in 1955. It’s taller 64-story sibling was completed in 1990 and recently received a new amenity level complete with a taco truck that was airlifted into place via helicopter.

A fixture on the Windy City skyline for 33 years, this tower with its diamond-shaped, angled crown is perhaps best recognized for its prominent role in the 1987 film Adventures in Babysitting. Known by a number of nicknames inspired by its debatable likeness to human anatomy, the tower was dubbed the Associates Center when it first opened. The skyscraper went by many names including the Stone Container Building, the Smurfit-Stone Building, and finally the Crain Communications Building.

Moving from the north end of Grant Park to its western flank is the tall, blue glass tower known as Legacy at Millennium Park. The 72-story, 822-foot structure was completed in 2009 and is set back behind lower historic buildings along Michigan Avenue. Legacy’s reflective facade is particularly pretty during sunsets.

Standing in stark juxtaposition to Legacy’s slenderness is the imposingly wide tower known as Mid-Continental Plaza. Designed by Alfred Shaw and Associates in 1972 as a 50-story office building, Mid-Continental Plaza later changed to mixed-use. Work to convert the top 15 floors of the tower into residential units began in 2007. The process saw the exterior re-clad and new balconies punched into the facade. Architecture aficionados remain divided over the aesthetic merits of the overhaul.

City skylines, like your living room, can benefit from a tasteful pop of color. In the case of Chicago, the accent comes from the crimson 600-foot tower formerly known as the CNA Center. Affectionately referred to as “Big Red,” the building dropped its CNA name following the insurance company’s recent move to a newer building at 151 N. Franklin. If you look closely, you can still see the faint outlines of the now-removed “CNA” signage at the tower’s top.

If you want to be correct, this building is known as the Willis Tower. If you want to sound like a local (or perhaps come across as older) it’s the “Sears Tower.” Completed in 1973, the 1,450-foot tower is the undisputed king of the Chicago skyline and held the title of the world’s tallest for decades.

The tower is currently in the middle of $500 million makeover which includes a new retail and dining complex at its base, LED lighting for its iconic twin antennas, and an planned overhaul and expansion of its 103rd-floor observation deck.

Essex on the Park

Looking further south is this glassy green-hued apartment tower known as Essex on the Park. The 620-foot structure comes from developer Oxford Capital and Hartshorne Plunkard Architecture. It recently opened its 479 rental units to tenants and features impressive views of Grant Park and Lake Michigan from its indoor winter garden and a cocktail lounge dubbed SX Sky Bar.

Like Vista Tower to the north, the imposing apartment tower known as NEMA Chicago has grown hundreds of feet and topped out since last year’s Lolla. The 893-foot-tall tower from developer Crescent Heights and acclaimed architect Viñoly Architects opened for business in July and is pretty much impossible to miss from Lolla—especially from the T-Mobile Stage. The South Loop giant is home to 800 rental units and 70,000 square feet of amenities.

Just east of NEMA is this 726-foot-tall tower known as One Museum Park. Designed by Chicago-based architecture firm Pappageorge Haymes, the 62-story residential building was completed in 2009. The structure makes a dramatic statement with multiple styles of glass and a curvaceous, almost lipstick-like crown.

This article was originally published on August 3, 2017 and has been updated to reflect the latest news.