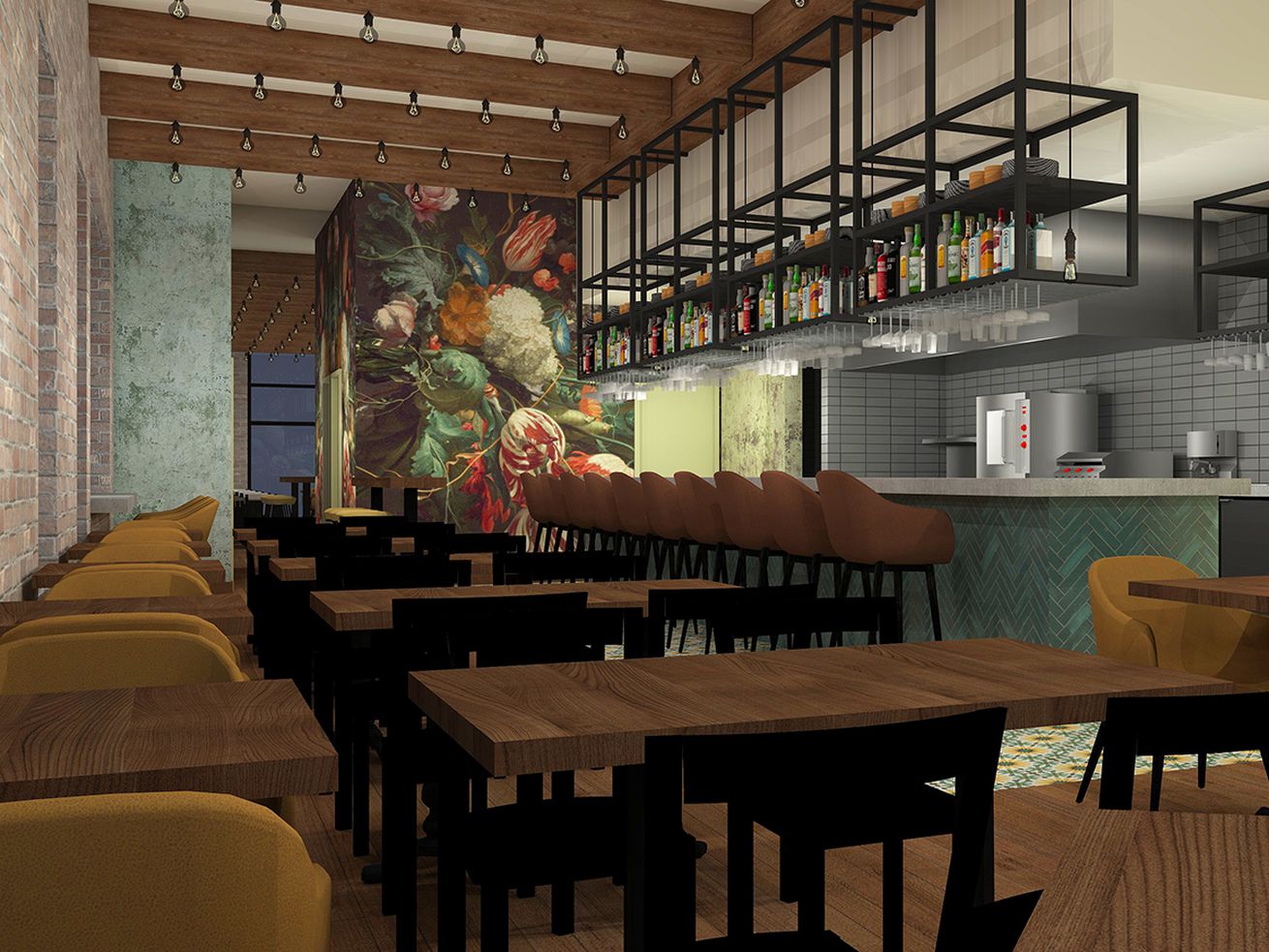 Take a sneak peak at renderings of La Luna’s interiors

Samantha Sanchez started working in the restaurant business when she was a teen, and in November she’ll open the first restaurant of her own. La Luna is slated for a mid-November debut at 1726 S. Racine Avenue in Pilsen. Expect Mexican flavors with a modern twist like a barbacoa-style burger.

Sanchez, in her mid-20s, wants to bring a fresh perspective to the restaurant business. Her father, Sam Sanchez, didn’t want his daughter to follow into the family business. Sam Sanchez is the very successful restaurant and bar owner behind Moe’s Cantina, John Barleycorn, and Old Crow Smokehouse. He’s so well-known that he threw out the ceremonial first pitch in July at a Cubs game and hosted a group with Rahm Emanuel last month the night the mayor announced he wouldn’t seek reelection.

“He’s been 100 percent supportive,” Samantha Sanchez said. “But he’s dealt with the good and the bad and everything in between. He was protective of me going into the business.”

That being said, Samantha Sanchez is revved up with the opportunity to leave a mark in Pilsen. Being a Mexican-American, she feels a tie to the neighborhood and she’s focused on keeping food affordable and accessible. Many locals feel new restaurants don’t do a good job of serving the community, and that’s something of which Sanchez is aware.

“I’m just super excited to start this journey off,” Sanchez said. “I think i’m ready, well you can never really be ready to open a restaurant, but I’m just excited it’s in Pilsen and I can relate to the neighborhood.”

La Luna’s food will be from Manuel Briseno, the chef who developed the food for Moe’s. Sanchez talked about a pastor taco that instead of using fresh pineapple will use dehydrated pineapple as a twist. The bar side will feature signature cocktails. Sanchez said each drink will take the trait of a character she’s envisioned. El Diablito means “little devil” and will be a spicy drink. La Dama will be a champagne cocktail, created to be more elegant.

The idea of community is important for a bar owner, especially in Pilsen where neighbors worry about developers pushing them out of their homes. Sanchez hopes the bar will be welcoming to all types, allowing them to mingle and meet. She’s been involved in digital marketing and Sanchez has been busy designing the space: “It’s basically my personality, it’s very earthy,” she said.

There’s a plant wall and blue tiles with exposed brick. Some folks told Sanchez that the interiors don’t really blend in with other Pilsen restaurants, but she promises some hidden features that locals will appreciate.

“I definitely want to create a neighborhood-friendly place,” Sanchez said. “We’re here to be welcoming and give visitors a place where they can go and find great food and cocktails. I’m sure they would even meet a few new people.”

Gina Stefani — the daughter of Phil Stefani, a revered Chicago restaurant owner — recently opened her first new restaurant in the West Loop. Sanchez said she hasn’t spoken to Gina Stefani, but said she wants to reach out given the similarities. Networking is one thing that her father excels at, and Sanchez wants to step up her social game.

Sanchez announced back La Luna in July and the restaurant should open next month. Stay tuned for more details.