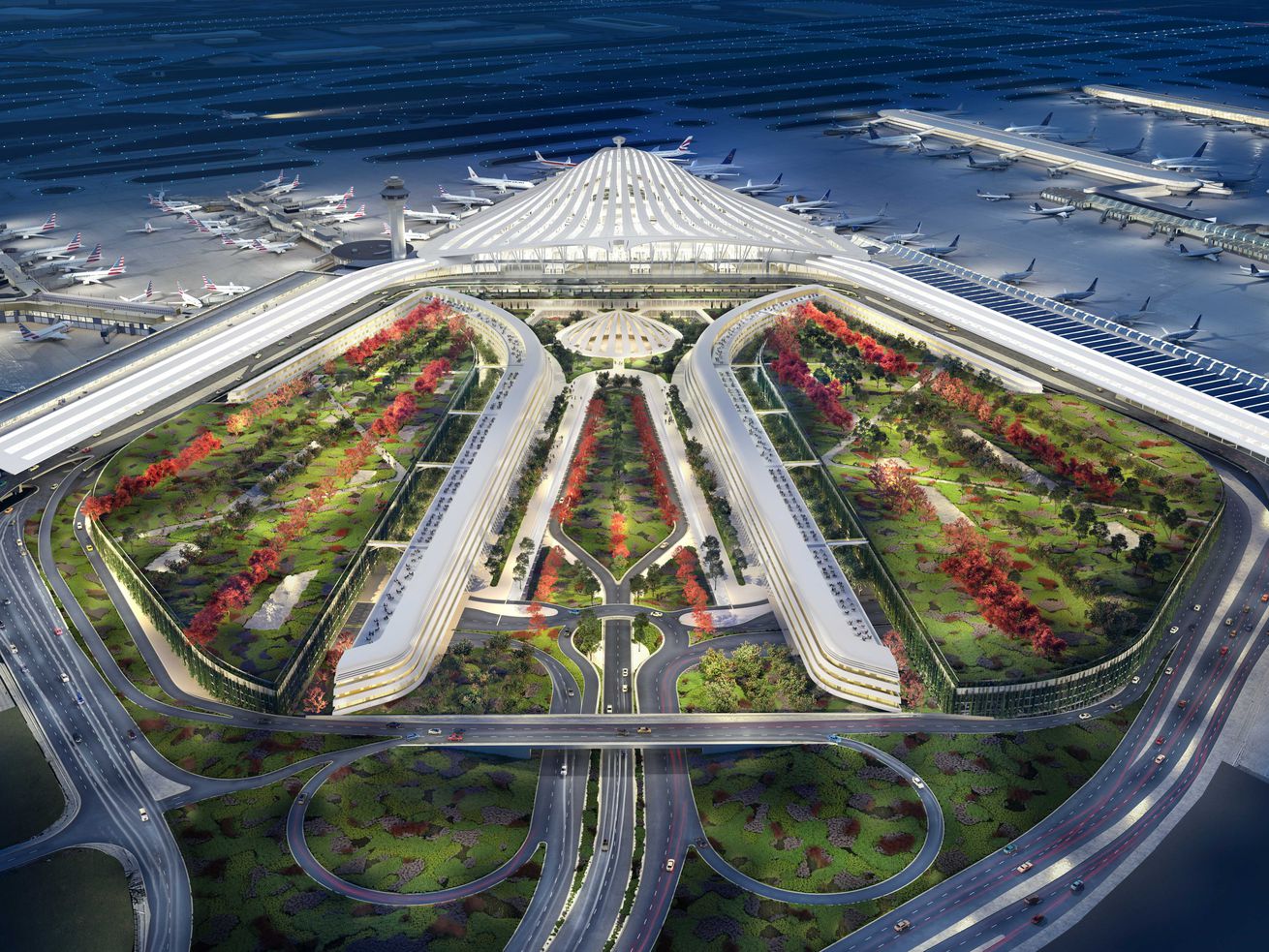 The massive proposal extends far beyond building a new terminal

Of the five teams shortlisted to design O’Hare International Airport’s $8.5 billion overhaul, the proposal from the firm of Spanish-born starchitect Santiago Calatrava clearly stands out as the most ambitious.

Going above and beyond the scope of its peers, it envisions not only the new global terminal as requested by city officials, but an option to transform more of the airport—most notably the space east of the airport’s access road currently occupied by the Hilton Hotel and parking garages. Here, the existing wall-like structures would be replaced by a centrally located landscaped esplanade lined with new offices, hotels, and conference centers.

“What we wanted to show was that in the future, if the city wanted, we could give the airport a new face by opening up the centerline and provide visual access to the new terminal,” Mike Pfisterer, chief architect at Santiago Calatrava LLC told Curbed Chicago. “We felt we couldn’t design a terminal of this magnitude without thinking about what else the future might bring.”

Calatrava’s terminal itself, however, is not dependent on this future phase and can move forward without the city pursuing a revamp of the Hilton site. The swooping, all-white design features plenty of its own advantages when it comes to layout, orientation, and efficiency, according to its designers.

“We studied different geometries and came up with this triangular shape that eliminated the need for a separate terminal and concourse,” explained Pfisterer. Of the five finalists, only one other design from a competing team led by Chicago-based Studio Gang arrived a at similar, wedge-shaped solution for the O’Hare global terminal.

The layout provides a more efficient floor-to-facade ratio and clear sight lines to all gates, added Calatrava’s chief engineer Iain Rowe. A tunnel connection to the future satellite terminals is located in the center of the building. Its placement reflects a Daniel Burnham-esque adherence to symmetry and ensures that connecting passengers have a more even distance to travel between gates and adjoining terminals.

The Calatrava design takes connectivity a step further by incorporating O’Hare’s existing—and awkward to access—Airport Transit System (ATS) into the new building. “We’ve taken a bit out of our budget to relocate the ATS into the facade of the terminal,” said Pfisterer. “In our view it’s not necessary for the terminal to function, but it’s a great improvement over what’s there now.”

On the topic of practicality, the terminal features many sensible touches despite its jaw-dropping appearance at first glance. “The supporting steel ‘ribs’ are fabricated in a very regular, two-dimensional way and then welded and bolted together on site. It’s not some hugely complicated array of interconnected members as you might expect,” explained Rowe.

The three-dimensional roofline—influenced by the seashell appearing at the top of the Chicago corporate seal—is designed specifically for ease of maintenance and to shed snow and ice, added the designer. The team became well aware of the city’s climate challenges, having gained firsthand experience traveling to Chicago and building mockups during the design and engineering phase of cancelled Chicago Spire skyscraper.

“For this project we worked with a local cost consultant with extensive experience designing projects for O’Hare to make sure that we are provided a design that can be built to budget and in time,” said Pfisterer. “We had some quite funny sessions early on where we had to change parts of the design after our consultant identified aspects that he thought were too expensive. We had to come up with new solutions until we were both happy.”

Despite assurances that the Calatrava plan is financially feasible, some have taken issue with the supersized scope of the design and its impact on the rest of the airport. Chicago Tribune architecture critic Blair Kamin, who voiced a preference the Norman Foster-led effort, wrote the Calatrava’s scheme is “over-the-top, proposing to subsume the existing terminals into a single, overarching design rather than respecting the architectural diversity of the O’Hare complex.”

The City of Chicago’s Department of Aviation is currently evaluating the five finalist designs and is expected to select an architect before outgoing Mayor Rahm Emanuel departs office in May.

City officials offered the public a rare opportunity to provide feedback and vote for the their favorite proposal in an online poll which closed at the end of last month. It’s unclear if and when the results of the survey will be made available to the general public, reports Crain’s.