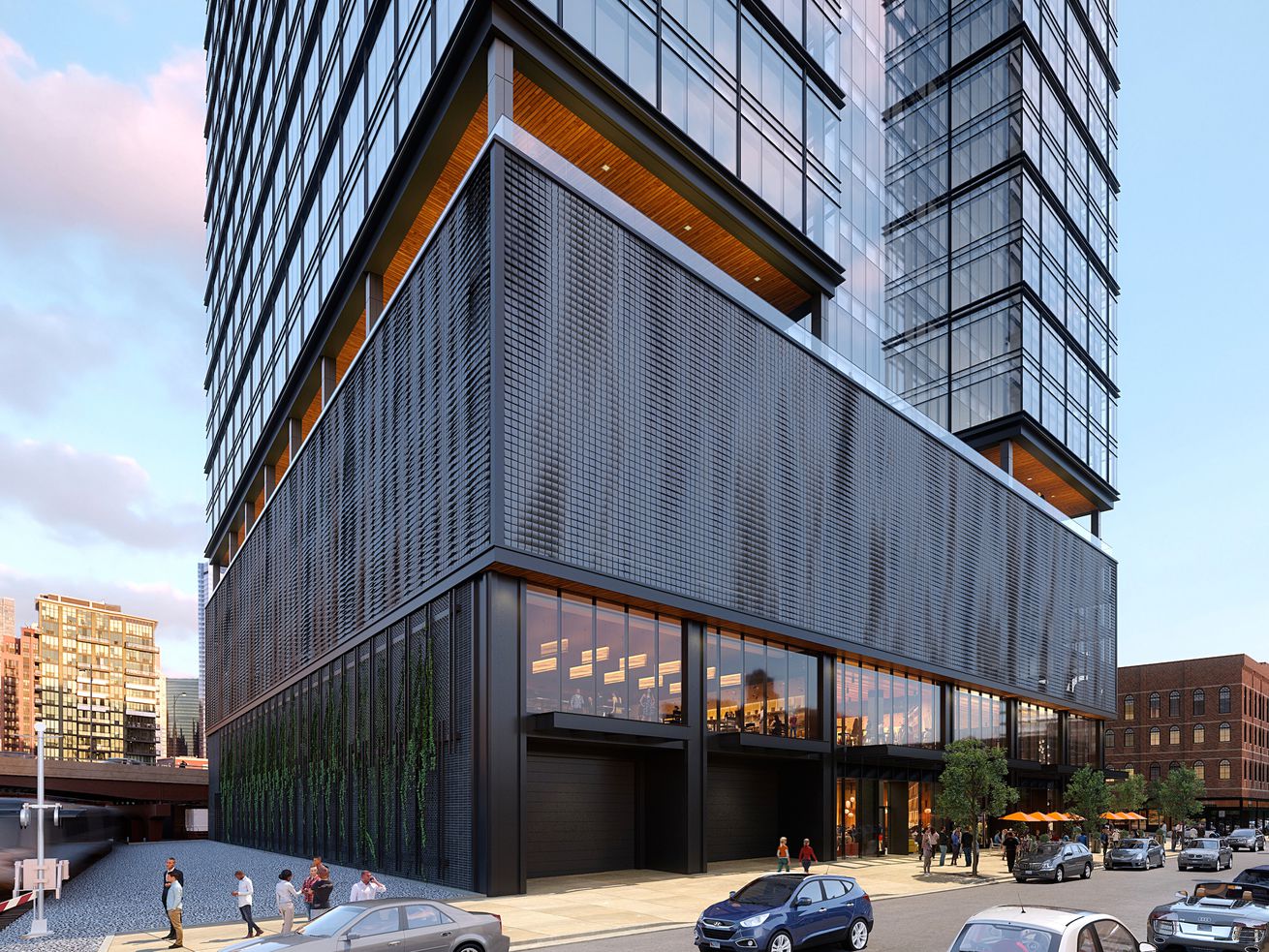 The upcoming office tower known as Gr333n will be wrapped in nearly 100,000 flappers that undulate in the breeze

Chicago’s soggy soil often makes above-ground garages an inevitability in new developments that require parking. While these podiums tend to run the architectural gamut from bland to downright dreadful in places like River North and Streeterville, one Fulton Market project—developer Sterling Bay’s 19-story office project under construction at 333 N. Green Street—has gone a decidedly different route by screening its garage behind a “kinetic wall” to gently undulate with the wind.

“The idea was to turn something that is utilitarian into art,” explained Sasha Zeljic of architecture firm Gensler’s Chicago office. “We looked at ways to activate the parking facade by creating movement. It needed to be functional to provide the required amount of ventilation as well as attractive and contextual to the Fulton Market neighborhood and downtown Chicago.”

Using the work of artist Ned Kahn as an inspirational starting point and working closely with fabricator Bruce Wall Systems, Gensler explored a number of variables before settling on the final design of the roughly 98,000 individual 6-by-6 inch metal “flappers” that will comprise Gr333n’s kinetic wall.

The components were precisely curved to capture as much sun and shadow as possible and amplify responsiveness to wind, Zeljic told Curbed Chicago. The flappers, colored dark gray to match the aluminum mullions between the office building’s glassy floors above, were shaped to minimize sound and efficiently shed rain, snow, and ice.

While the University of Chicago has a small kinetic wall on campus, Sterling Bay’s project spans 33,663 square feet, making it the largest facade of its type in the state of Illinois, according to Gensler. A similar wall is also in operation at a parking garage at Boston’s Logan International Airport.

In addition to its eye-catching facade, the parking levels of Gr333n are cleverly designed to be reconfigured into “people floors”, should demand for parking dramatically drop with the introduction of new technology like driverless cars. Gensler is already undertaking these types of projects including an innovation incubator inside an existing garage at Northwestern University’s Evanston campus.

“Parking is a necessity in Chicago right now,” added Zeljic. “If it needs to be above the main entrance to a building and comprise such a large portion of the facade, let’s find a way to making it interesting as a way of giving back to the community.”

Other notable features of Gr333n’s contextual design include a trapezoidal footprint and dark exterior steel, both influenced by the adjacent Metra rails. The development’s pedestrian along Wayman Street hugs the site’s unusual 18-foot elevation change from Green and Halsted streets and provides landscaped steps and public seating with warm wood soffits overhead.

Expected to open in late 2019, the fast-climbing office building will be anchored by advertising firm WPP. The project is one of three similarly-sized office developments that Sterling Bay is planning for the 300 block of North Green Street, in and around Fulton Market’s former Coyne College campus.

PrevPreviousThe 9 Most Anticipated Restaurants and Bars in Chicago, Winter 2019
NextMore than a century after its Paris premiere, Cendrillon comes to the LyricNext